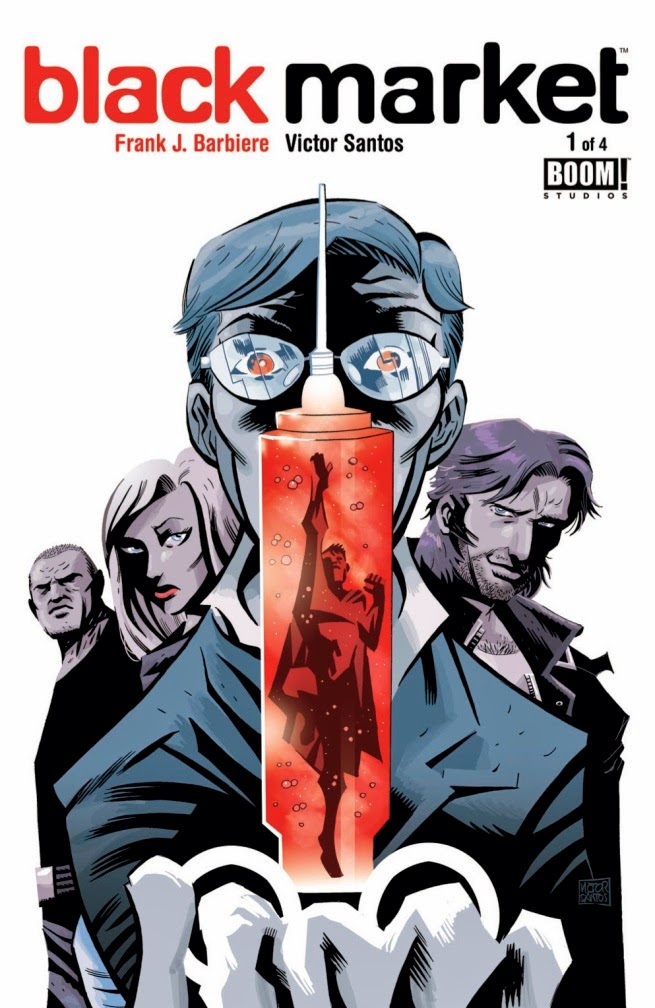 Black Market #1 is the story of Raymond Willis, a down on his luck mortician, who is out to change not only his circumstances but his wife’s as well. In order to do this, Ray walks down a path that leads to the Black Market.
Writer Frank Barbiere does a masterful job of connecting Ray to the reader. One of the first sequences involves Ray’s boss Benito yelling at him to finish his work today and make sure he is in before 4:00 a.m. the next day. Not only does it seem as if Ray is being worked to death, but he is struggling to make everyday purchases at what appears to be the local drug store. He rummages around in his pockets as people in line behind him give him impatient stares, stare at their watch and tap on their cell phone as he searches for cash. To make matters worse and create even more sympathy for Ray, his wife Shannon has been diagnosed with Multiple Sclerosis (MS) a disease which damages nerve cells in the brain and the spinal cord.
Victor Santos’ artwork is essential in conveying how down on his luck Ray really is. Whether he is chasing after a missed bus, walking to his large brown bland apartment building, or entering his spartan apartment with a number of bills spread out on the nightstand, Ray’s life could definitely use a major improvement.
Not only does Ray have personal problems, but he also has a history of trouble stemming from work he has done with his brother, Denny. However, the past is the past, and when Denny shows up on Ray’s door, he brings a whole new set of troubles that Ray is too easily convinced to make his own.
Meanwhile, Barbiere is also telling an action-packed story. Ray has already made his deal with Denny and is carrying it out. Their objective: a superhero named Hotspot, who is saving innocent civilians from a burning building. The brothers, with the help of muscleman, Bruiser, easily weaken and capture the Super. However, Supers don’t go down easily and Santos is able to be creative with the fight scene having panels subset into the larger page drawings. The design creates a sense of mass chaos and intense struggle with medical supplies and bits of flame flying across the page.
In the end Hotspot is captured, but what Ray, Denny and Bruiser do to him next is what is at the heart of Black Market. The book is only held back by a somewhat confusing narration by Ray that jumps back and forth between timelines. The confusion is apparent during the sequence where Ray is taking care of his wife, but he narrates about events that have yet to be revealed to the reader. It definitely has the reader wanting to know more about the events, but is generally perplexing with the dual timelines.