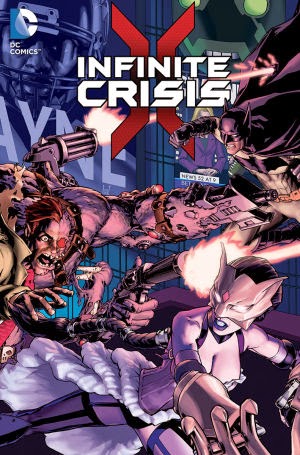 Infinite Crisis is a multi-universe war, where failure results in the end of all the universes from Gaslight to Rad-Zones and Scraper-Tops to Death Pits. The book contains not one but two stories both by writer Dan Abnett. The first titled Prelude and the second aptly named Infinite Crisis. Prelude gives the history of the Infinite Crisis and how it has come before in the name of the Anti-Monitor, who destroyed universe after universe until he was stopped by the sacrifice of the Monitors of Nil.
Now, there are only 52 universes held in perfect balance in the Bleed. Only one Monitor of Nil survived, Nix Uotan, and he must recruit heroes and villains from the remaining universes to combat the new threat to the harmony of the multiverse.
His first recruit is Harbinger of the Forerunners a survivor from Earth-48, the first universe to be attacked by the new enemy. Harbinger is able to travel through the Bleed with a Monitor orb, which is an all too simple plot device used to introduce the reader to a number of the 52 universes.
The artwork by Larry Stroman and Trevor Scott in Prelude is bright and colorful from the orange blood-like Bleed portal to the sharp blue of the underwater Death Pits. The action is intriguing from blasts of energy firing out of Harbinger’s hand to the use of the Monitor orb to travel to a different universe.
Not only does writer Dan Abnett use a cliché plot device, but he bludgeons the reader over the head no less than three times letting us know the multiverse is made up of 52 universes and an unknown threat is gathering forces to destroy them. In the second story, it would have been better if the reader had not even read Prelude. Prelude takes away from Infinite Crisis.
In Infinite Crisis, the second story, Batman is on the hunt for a cat-burglar and puts his detective skills to the test in order to find out just who it is. The discovery of the burglar leads to an interesting fight sequence, where artist Szymon Kudranski showcases a unique style. A punch or kick is not shown actually making contact, but rather in the follow through after the contact has already been made. The artwork does not really do the fight as much justice as it deserves and at one point the burglar threatens to “extinguish” Batman even though Batman has roughed her up.
This threat is made even more ludicrous in a much tougher fight against Atomic Two-Face, a henchman of the unknown enemy who has been hunting down the burglar in their race to acquire powerful artifacts with the capability to be used as weapons. Atomic Two Face easily dispatches both Batman and the burglar despite the burglar’s use of the weapon against Atomic Two Face. Apparently, the artifacts are not really that powerful after all.
The ending reveals the clichéd plot device used earlier as another heroine takes up the mantle of the burglar and performs a summoning of allies. Why didn’t the burglar do this in the first place? The dark atmosphere of Gotham or Gaslight Gotham created by Kudranski really attempts to save the book and constructs an air of desperation and hopelessness, however the plot holes and uninspiring action sequences are too large to ignore.