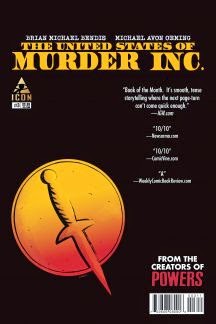 The third installment of The United States of Murder Inc. continues the world building Bendis began in the previous issue. The United States army is invading Cleveland against a well-fortified and entrenched mafia family. The second page is awe-inspiring and also a tad scary with Oeming giving a full view of the destruction and death an all-out war creates between the mafia and the government. Bodies are lying on the ground in flames, tanks are firing shells into a building causing huge explosions and raining bricks onto the street. The double page captures the chaos of war.
The action beginning with the Battle of Cleveland hardly stops the entire book. Bendis and Oeming take us from a war zone to an intimate fight scene between Jagger Rose and two unknown men. Oeming steals the show with an awesome panel of Jagger firing her pistol right into her attacker’s forehead. What really makes the panel stand out is the line representing the bullet’s path from the pistol to the man’s forehead. It has the reader cheering for Jagger and even shouting, “Yeah!”
Moving away from Oeming’s fantastic artwork, Bendis introduces the rest of the Five Families’ bosses. The exchange between them is fantastic. Bendis is able to convey rivalry, a little more than a hint of distrust, but also a level of respect each of the bosses has for the others. However, Bendis’ presentation of their interaction is done in an extremely small font, albeit there is a lot of information, but it may make it hard for some to read.
Taki Soma’s coloring is again top notch, contrasting the Battle of Cleveland where the black and grayish white convey the past to the present with the deep red of Jagger’s hair and apartment. The use of just a few colors for each page gives the book itself a Mafioso feel.
One of the highlights of the book is the relationship between Jagger Rose and Valentine. Bendis takes it to new levels of both trust and weirdness. There is one scene where Jagger Rose has Valentine tied naked to the bed, and it is not what you are thinking! The scene adds some nice levity to an intense book with almost non-stop action and heightened drama.
The drama intensifies if that was even possible. Towards the end, Madonna Gallo has a visit from some friends that turn all your assumptions and expectations upside down, and open a ton of paths for Bendis and Oeming to explore. Oeming’s artwork on the last page does an excellent job of mirroring what the reader is feeling: shock.