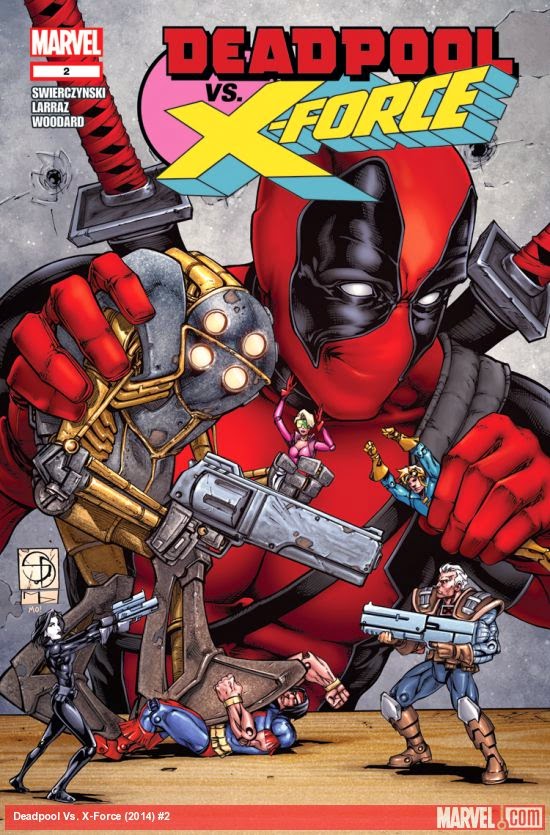 Deadpool continues to change the course of history; this time his sights are set on the Battle of Gettysburg in the summer of 1863. Writer Duane Swierczynski is able to take full advantage of Deadpool’s ability to understand he is a character in a comic book, having him speak directly to the reader from the first page. The humor is fun and light-hearted especially when Confederate soldiers are obviously perplexed and begin questioning whether or not Deadpool is even talking to them!
The book is once again full of non-stop action when Cable and the X-Force attempt to subdue Deadpool, but face a much more numerous Confederate force outfitted with artillery and muskets. Despite the superior numbers, the Confederate force does not really stand a chance against Domino and Warpath, who really only seem concerned about a potential loss of hearing from the roar of the cannon fire.
Pepe Larraz is top-notch once again with his artwork, and even adds a little steampunk, when some of Wilson’s machinations at Germantown in the first book have manifested themselves in the inventions of the Union army: massive land ships with smoke billowing out of their chimneys as they move to confront the Confederates, to tank-like crawlers equipped with multiple cannons firing some type of energy pulse and even what appears to be manned robotic walkers armed with huge golden rifles. These inventions not only look awesome, but pack a powerful punch! Larraz demonstrates their power when Cable travels back in time to warn Boom-Boom and Cannonball about the potential catastrophic ripples Deadpool is starting to cause. Cable is down on his knees and his wounds are smoldering and the time portal appears like smoke rising from his body.
The book isn’t all action and there are a few moral dilemmas the X-Force faces, which give Swierczynski the opportunity to flesh out their personalities. The most impactful is when Cannonball and Boom-Boom must decide whether or not they will attack the men “who laid down their lives for [their] freedom.” Unsurprisingly, they come to a pretty quick decision: they are soldiers and soldiers follow orders no matter what. It will be interesting to see if Swierczynski will expand on this discussion or leave it as is.
One of the more odd parts of the book appears near the end when Swierczynski begins narrating the story describing Warpath and Domino’s abilities. It is rather odd and even off-putting as it seems to break up the flow of the book, although it may help new readers understand their abilities despite their abilities being displayed in Larraz’s artwork and dialogue between the two.
The book continues to explore how history could have changed and continues to keep the reader guessing as to what Deadpool’s motivations are as well as who is employing the mercenary. The artwork by Larraz, accompanied with coloring by Nolan Woodward, definitely stand out in a fun journey through history.