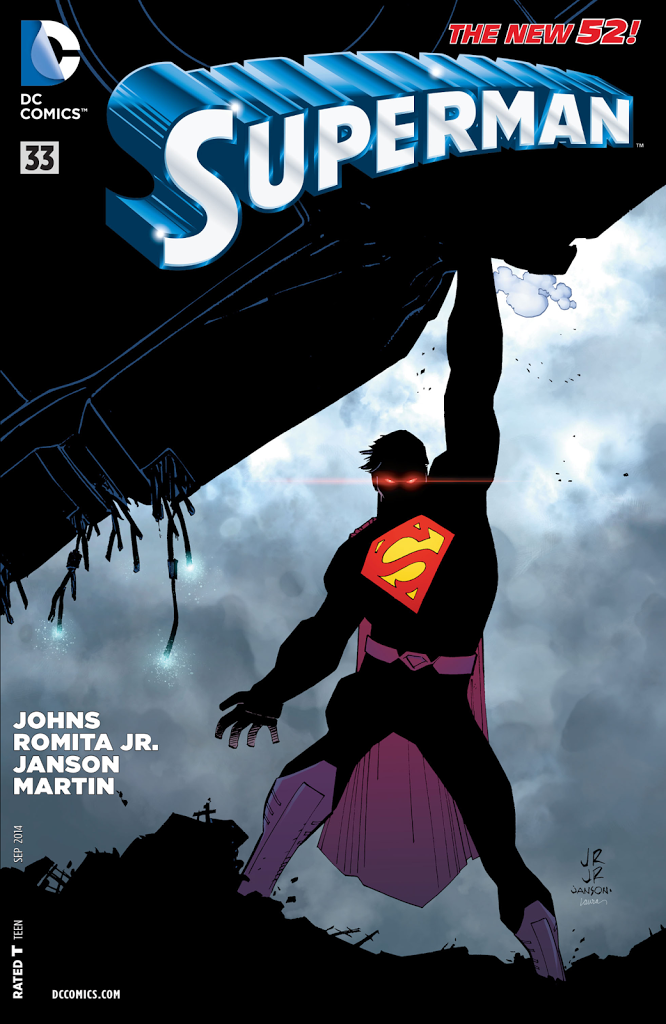 The story picks up exactly where Johns and Romita Jr. left the reader in Superman #32 figuring out who is Ulysses. The man who wants to know the most is of course the fiery editor-in-chief of the Daily Planet, Mr. Perry White. The opening sequence allows for some nice banter among co-workers, although it is extremely heavy on the speech bubbles.
The heavy speech bubbles go on for a few pages with an almost entire recap of the beginning of Superman #32 on just one page: Perry gives details on the Ulysses Research Lab and how it all went wrong.
Geoff Johns is able to have some fun with Ulysses when he removes the uniform and begins exploring Metropolis. Ulysses is quite perplexed when the citizens refer to him as “handsome” and “buddy.” Naturally he corrects them and informs them his name is Neil. It adds much needed humor in a very heavy information-focused book. Not only does Johns add some humor through the character, but he also introduces more of his abilities, especially one that could have a lot of interesting consequences for Superman.
Ulysses also is center-stage for Romita Jr.’s detailed action sequences involving the beheading of a robotic soldier, which reminds one of the small toy green soldiers you played with as a kid. The sequence brings out Ulysses’ ferocity and his ultimate desire for peace which, ironically, he uses violence to obtain. Johns uses the after-action sequence to draw a contrast between Superman and Ulysses, one that defines who Superman is.
Romita Jr.’s artwork shines again and brings back memories of reading the Sunday Funnies especially the scenes in the newsroom. Although there are some panels where Superman seems stiff and his positioning looks awkward. There is one where he is turning to face Ulysses and his neck is almost at a 90 degree angle. It hurts your neck just looking at it! Romita Jr. excels in the action sequences whether it is the green Titano-like soldiers being blasted into smithereens or Ulysses going into Super-Saiyan mode as the crowd in the background cowers in fear.
One thing is for sure despite the large information dump by Johns, the story is intriguing and takes a huge twist at the end, that no one saw coming from the first book. The twist is so major it could drastically affect an entire character’s view of himself and the world around him.