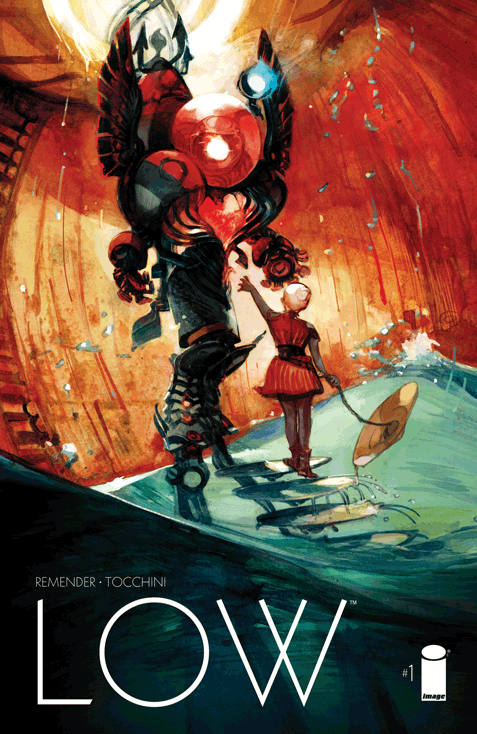 Humanity has fled the surface of Earth into the depths of the oceans to avoid the expanding sun and its blistering heat. They have fled to an underwater city known as Salus, where the Caine family uses an advanced robotic suit technology to hunt the predators of the deep and provide sustenance for the citizens of Salus.
Writer Rick Remender uses the beginning pages to introduce the reader to the world of Low, life under the dome of Salus, and the Caine family. Salus is luxurious and artist Greg Tochinni makes sure the reader understands it. He uses bright greens, yellows, oranges, and blues to highlight a roaring fireplace, sweeping staircases, towering skyscrapers, and lush vegetation among a few of the niceties in Salus.
Everything is not hunky-dory. Stel Caine tracks thousands of deep space probes in their effort to find a habitable planet for relocation. In the meantime, Johl Caine, Stel’s husband is “the last Great Helsman of Salus” and in order for the city and his family to survive he must take on the role of the hunter. The two are not alone and they have three children, two daughters, Della and Tajo, and a son, Marik. In what seems to be fashionable, typical gender roles are reversed among the children. The daughters wish to follow their father and learn to be helmswomen, while Marik is content to stay in Salus and takes after his more cerebral mother.
Remender takes his time introducing the story and allows Tochinni ample opportunity to use a 1950s-esque art-style to show off the world of Low. Eventually, Remender takes the family minus Marik out past the confines of Salus on a hunting mission. Not only are there massive underwater creatures, but there is also the threat of the Scurvy Horde.
Strangely, both the massive underwater squid-like creatures and the Scurvy Horde are able to communicate and execute a well-timed ambush. Tochinni adjusts the coloring adding in more reds signifying the seriousness of the danger. The leader of the Scurvy Horde oddly does not resemble the rest of the Horde at all. He is very humanoid and resembles the Caine family, while the rest of the Horde appears skeletal and not of the living breathing world.
Remender uses interesting dialogue for the villain, having him taunt the Caines with every word he says attempting to wound their soul rather than physically harm them. However, the dialogue cannot cover the overall ease the Horde has of taking over the Caine ship, especially after building up the family’s mythos in the preceding pages. There are also a few panels where it becomes hard to follow via the artwork. At one point what appears to be the Helmsman technology hits the ground, but in the next panel the Horde is vacating the Caine’s ship. In general, Tochinni’s artwork does a fabulous job of complementing Remender’s story creating both an intriguing world as well as strong emotional characters.
Remender creates a good origin story, one that has made the likes of Batman and Spiderman legendary although Remender changes the formula up just a tad adding in a dose of hope.