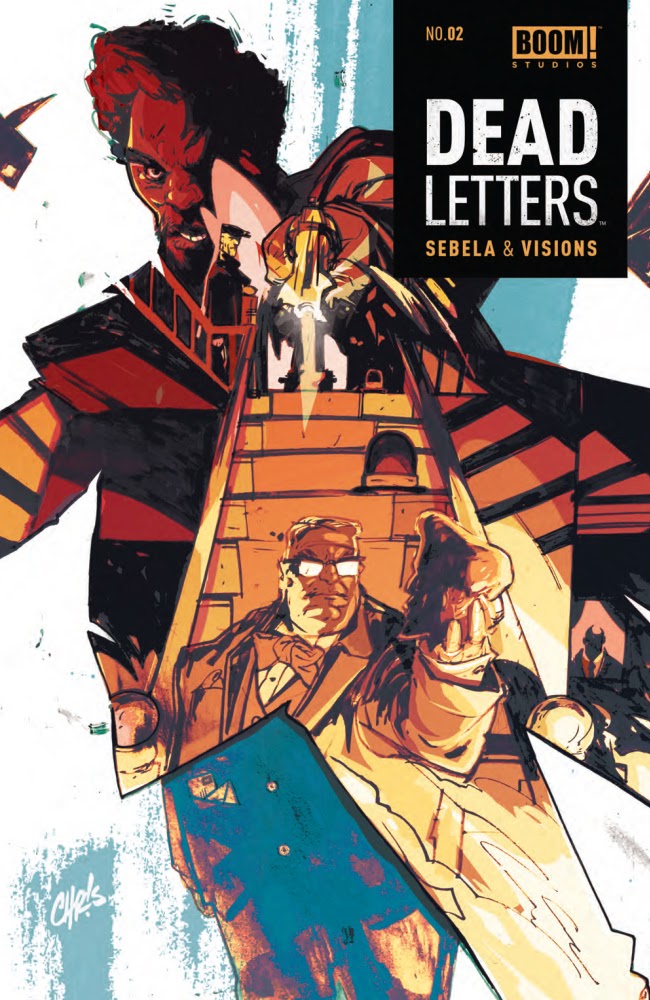 Writer Chris Sebela shifts gear from the heart-pounding action of Dead Letters #1 to begin to shape the world of Here. The reader is exposed to a short history lesson of what Here is, how it was supposed to function, and how it all went wrong, mainly underestimating people and their ability for free will.
The history and world building create a nice flow for Sam’s new employment. He sets off investigating the disappearance of a woman named Beryl who was in deep with both of the major gangs led by Jones and Ma. Sam’s internal monologue once again steals the show as he dives into his work in an attempt to save his mind. Sam is not only distracting himself when he begins to follow Beryl’s footsteps through Here, but Sebela uses the opportunity to build up how society has changed when time is no longer the most important commodity. And maybe the most frightening aspect is Sam’s idea that it hasn’t really changed much at all. “Life ain’t fair. Turns out Death ain’t either.”
Beryl’s path eventually leads Sam to a club and her former husband. The setting is perfect for a nice shoot ‘em up sequence. Chris Visions’ art during the action sequence again is great; he includes the fine details of the shot glass being splattered by the bullets to the alcohol running off the bar into Sam’s hair. Jones’ big thug is especially terrifying in his red suit and yellow shirt with his evil smile screaming “I’m evil and I’m going to hurt you.” One of the best panels in the book is when Jones is recounting his life before he arrived in Here. Visions combines Sebela’s narrative with a fantastic visual of Jones’ past being shown in his sunglasses from the barn where he was raised to the tools he used.
Following the initial world-building process and an enjoyable action sequence, Sebela gets back to character development and discovering more of Sam’s hidden talents: specifically his resourcefulness, street smarts, and most importantly his talented tongue. Sam is a masterful politician playing Jones and Ma off each other as he continues to dig up more information about Beryl and what happened to her.
The ending of the book gets a little bit confusing attempting to follow the panels, although that might be because what is happening in the panels is chaos. At one point Sam slips away and appears to find what he has been looking for. Yet it is not clear exactly what he has found – whether he is peering into the past using an advanced relic or has actually found hard files. After finding the information, the story jumps to one of sheer terror and one thing is for sure Sam’s talents might not be able to get him out of the mess he has found himself in.