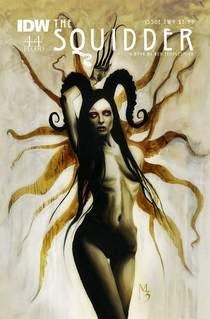 Shifting focus from world building and brutal action scenes in the opening book, Ben Templesmith instead turns to developing an intriguing and complex story centered on character development. He introduces a number of new characters which help drive the story and push the Squidder upon his hero quest.
The first character Templesmith introduces is the Squid Priestess, a pawn used by the gangs to obtain power. However, she is much more than first described. Her conversations with the Squidder are the main focal point of the entire book and allow the reader to experience the emotional suffering of both her and the Squidder. The dialogue also exposes the Squidder’s driving motivation, his hate for the Squid, which in this reviewer’s opinion is really only a mask for his love of humanity embodied in the haunting visions of his wife Fiona.
The other two characters Templesmith introduces are members of the Squid, the first being Queen 59B and the second being the Dark Father. These two characters ooze evil in how Templesmith has drawn them. Queen 59B takes the appearance of a humanoid with horns sprouting from her head and spikes protruding from her back. These do not take away from her soft, feminine features, which remind one of a succubus. The Dark Father is the opposite of Queen 59B in that he is a mass of tentacles and eyes hanging from a ceiling. Some of the tentacles flow down taking the shape of a skinless human with two massive horns arising from his skull. Not only are these creatures creepy to look at it, but humans are merely playthings to them. At one point, Queen 59B gifts the Dark Father a decapitated head, which is still screaming, pleading to be killed. The Dark Father adds the head to a growing mass of human flesh he refers to as “our masterpiece.”
Templesmith intersperses the character development with a glimpse into the past of Earth and the battles before hope was lost, as well as some action sequences with the Squidder. The action sequences, though not as shockingly brutal, still hit home when the Squidder decapitates a man with sniper rifle. A battle weakness is also revealed in a skirmish with the local gang when Templesmith draws his intestines flowing out of his stomach.
One of the weaknesses of the story is Templesmith’s use of a prophecy involving the Squidder, making him unique not because of genetic experimentation or his combat prowess, but because of an over-arching divine plan. The introduction of the prophecy is also a tad confusing when the Squidder has two very different reactions, one matter-of-fact and the second anger, all in the same panel.