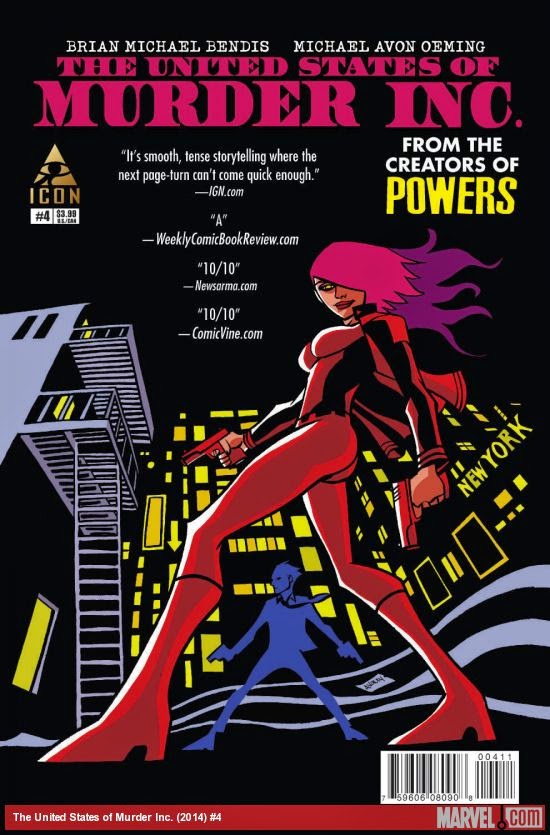 The beginning of the story once again begins with a stroll down memory lane; this time Bendis takes us to New York City circa 1971. The power of the Five Families is front and center as they confront a stock broker, who has not been paying his dues. There is no tolerance for failure and the mob’s justice is carried out with the swift chop of a machete. Bendis does an excellent job of fitting in the harsh mob brutality, a quick criticism of the stock market, and the displaying a grand vision all in a page and a half!
Bendis also does not make the mistake of confusing the reader with an out of place time jump. He allows Oeming and Taki Soma’s combination of beautiful artwork and eye-catching color to make his job easier. Oeming emphasizes the grandiose nature of the Five Families’ vision with a large chandelier and craps dice flowing across the page on a sprawling casino floor. Taki Soma’s coloring from the past to the present creates a stark contrast allowing the reader to know they are in a different time even without the prompt informing the reader they have left the past.
Not only does Bendis create fantastic transitions between time and location, he weaves a gripping story throwing multiple curveballs and twists edging the reader closer and closer to the edge of their seat. The comedic breaks are perfectly timed and break the tension between Jagger Rose and Valentine. After an intense battle sequence Valentine references looting the dead bodies as if he just killed an epic boss in World of Warcraft. Rose even makes a veiled Star Wars reference: “Who really did shoot first?”
Leaving Valentine and Rose, Bendis uses the second half of the book to create intense drama whether it is the interrogation of Madonna Gallo or a heated moral discussion on how to preserve the peace not only among the Five Families, but also with the Feds. Bendis weaves an excellent dialogue among the Bonavese Family leaders; he casually drops one of the biggest shockers the story has seen yet!
The only complaint is the transition between three panels. The panels are set up where two are stacked on top of each other while the third is to their right. The reader must read down the first two panels before moving to the larger third panel. They use the same panel setup on the following page, but it flows much better since Bendis places his bubbles at the bottom of the larger panel rather than on the top. It throws the reader for a loop if read out of order and forces them to reread the panel.
(Visited 49 times, 1 visits today)