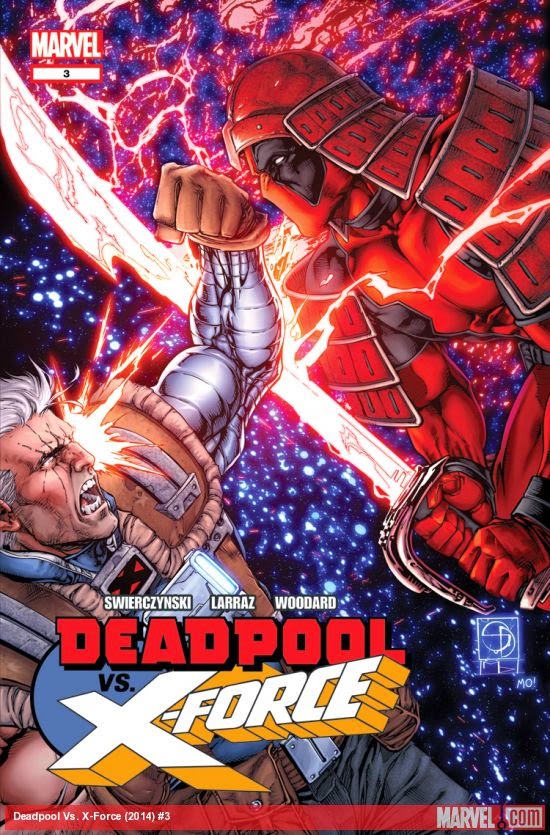 Duane Swierczynski, Pepe Larraz and Nolan Woodard left the reader in China at the turn of the 20th century, a fact which Deadpool is happy to remind the reader. The opening page starts off right with a good chuckle and uses a creative word bubble and the occupying images to replace Cable’s understandable profanity.
Swierczynski keeps the smile on your face as Deadpool tests out his fancy new toy, forcing Cable to march in lockstep and even salute. Unfortunately the story takes a turn for the unbelievable. Deadpool’s toy has absolutely no power over Cable at all; his marching and saluting are all a ploy in order to smooth-talk the mercenary into spilling the beans on his plan. Deadpool, playing the villain, is happy to oblige in a monologue explaining why he meddled in the Revolutionary War, the Civil War, and now China.
While Deadpool explains his masterful plan, Pepe Larraz maintains the torrid action-packed pace the previous books have set; there is an action scene on almost every page! Boom-Boom is launching fireballs at American forces while Cannonball flies alongside of his namesake tossing revolutionaries through the air. Warpath and Domino are smashing both Confederate cannons and Union techno-monstrosities. The best scenes are with Deadpool, whether he is tearing apart Chinese infantrymen with his gun, sword, or boot or brawling with Cable. Larraz does a great job with Deadpool’s facial expressions especially one scene where Cable reveals his charade and Deadpool knows what is coming: a hurting. However, there was not any “holy crap those fireballs look as if they are flying off the page” moments as there was in the first book.
Nolan Woodard’s colors, especially his use of light when he focuses on Boom-Boom, adds an emotional touch to the story, the reader has not experienced before. He also keeps up the good work with his explosions and gun fire using shades of blue, green, yellow, orange and red to create and denote the different types of explosions and gunfire.
Swierczynski keeps the book entertaining and lively with Deadpool’s commentary and even gives a nod to veteran readers of Deadpool. The most amusing section comes towards the end of the book. Swierczynski pokes fun at the way comics use the asterisk to denote a language translation. The dialogue, though some may deem childish or immature, is effective and had this reviewer laughing.
Swierczynski leaves a huge shocker that few will have seen coming and sets the stage for the grand finale in the fourth and final book.