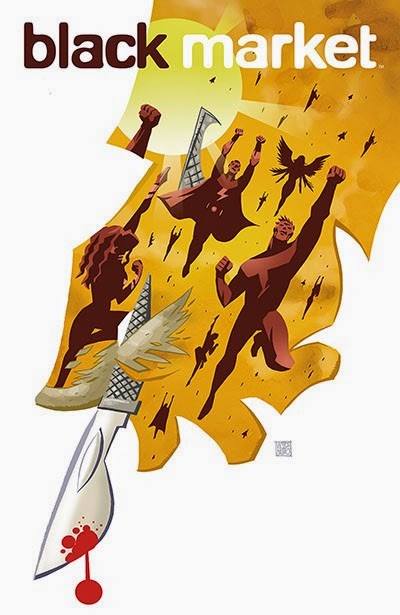 Ray and Denny return in Black Market #2, but instead of moving the story forward writer Frank Barbiere continues with a retrospective into Ray’s life before he teamed up with his brother Denny and Biochem.
The book begins with Ray working for the police as a medical examiner; he is performing an exam on a hopeful bank robber. Unfortunately for the bank robber, there was a Super who intervened and did he ever intervene. The bank robber has a giant gruesome hole in his chest! The sequence not only gives the reader a glimpse into Ray’s past, but also provides background on the budding conflict between the Supers and everyday folks, especially the police.
Once Ray leaves work and returns home, his brother Denny shows up at his door begging him to save a man’s life at the warehouse! It seems Barbiere is attempting to rewrite Denny’s return into Ray’s life. Here he has Denny showing up on November 8, 2012, although in the first book Denny appeared at Ray’s house for the first time on June 14, 2013 to proposition him to work with Biochem. This plot hole gets even larger when Barbiere jumps to June 15, 2013 where he introduces Ray to the fully stocked warehouse! Is the reader to presume Ray already knows about the warehouse when he is supposedly first being introduced to it?
Following this gaping hole, Barbiere adds another one. After the ending of the first book, Ray is adamant Denny and Bruiser should not drain too much of Hotspot’s blood and leaves them assuming he will not be killed. However, the reader concludes this is in the past since Ray states on the very last page of book one, “… I Kill Superheroes!” The reader is also led to believe Hotspot is their first victim; this is not the case. Following Barbiere’s excellent back story to Bruiser, a former-hero and vigilante crime fighter, the trio pursue and subdue Electric Lad, but what they do with him is left to the reader’s imagination. Most likely he was killed, but then Ray’s protestations in the first book seem to have little or no meaning.
Despite the plot holes, Barbiere is able to create a sense of anger amongst the common folk towards the Supers. During Bruiser’s back story, the Supers were friendly. Both sides were fighting to clean-up the streets, but once the streets were cleaned the Supers became reclusive, retreating amongst themselves. They were not seen as heroes anymore, but threats to a way of a life.
Victor Santos’ artwork continues to provide a good mix of realism with the fantastic. Shan twirling her hair as she flirts with Ray really emphasizes the good life he had before Denny. While the aftereffects of Electric Lad’s powers on Ray and Denny create a real sense of danger and depict the power the Super’s have over the everyday man. Adam Metcalfe’s colors keep the book lively from Electric Lad’s blue to the glowing red of the Super DNA.