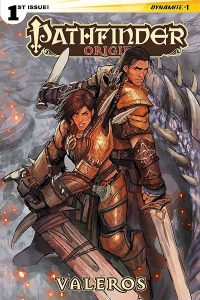 A group of adventurers has gathered to begin their next quest, but first they regale their quest giver with their credentials. Is it good?
The premise for the origin story of Valeros feels too forced. Writer Erik Mona creates a scenario where a group of adventurers has already accomplished what appears to be a great feat in defeating The Gallowed Gang, but they are forced to defend themselves and their characters when attempting to obtain another job. The quest giver points out all of their flaws and why they are not fit to be given a quest.
After about two pages, which feels a lot longer due to the large amounts of dialogue, you finally get to the origin of Valeros. He is a typical mercenary who likes to enjoy his cups a little too much. Unfortunately, this gives Mona a perfect excuse to utilize the all too often used cliché of finding a job in the local tavern. It is livened up a bit with a bit of action, but you have to suspend disbelief quite a bit when the folks trying to hire him are set upon by demons.

Affiliate link: Click here to get your copy of Pathfinder: Origins #1.