If you haven’t been paying attention to the brand new Star Wars comics from Marvel that debuted at the beginning of this year, you have been missing out on some fun adventures with Luke, Han, Leia, Chewie, C-3PO, and R2-D2. The story takes place between A New Hope and The Empire Strikes Back.

Jason Aaron, who is writing the comics, has captured the core essence of each of the main characters. Luke is as curious as ever, wanting to learn more about the Force and understand the ways of the Jedi. Leia maintains her strong personality, acting as a commander and leader for the Rebel forces while still complaining about the piece-of-junk Millennium Falcon. Han continues to be a roguish devil, pulling off seat-of-your-pants heroics and maintaining his charm after saving the day.

It also further examines Darth Vader and his relationship with the Emperor and the Dark Side of the Force. You are able to see the budding cracks form in the hard rage-filled exterior. Boba Fett is also fleshed out a little bit, providing Bounty Hunter duties for Vader in search of the pilot who destroyed the Death Star. The series has done an excellent job of adding new adventures and challenges while maintaining the camaraderie between the characters and their personalities.

**Massive Spoiler Alert Below. Continue Reading at Your Own Peril**

However, in [easyazon_link identifier=”B00XILZYHM” locale=”US” tag=”bounintocomi-20″]Star Wars #6[/easyazon_link] Jason Aaron reveals the identity of a new character who first appeared in the fourth issue. This character has been hunting down Solo for two issues, even wounding a number of Rodians in a similar fashion to how Han shot first and killed Greedo. Finally, this individual tracked him down. The character reveals herself to be Sana Solo, Han’s wife. 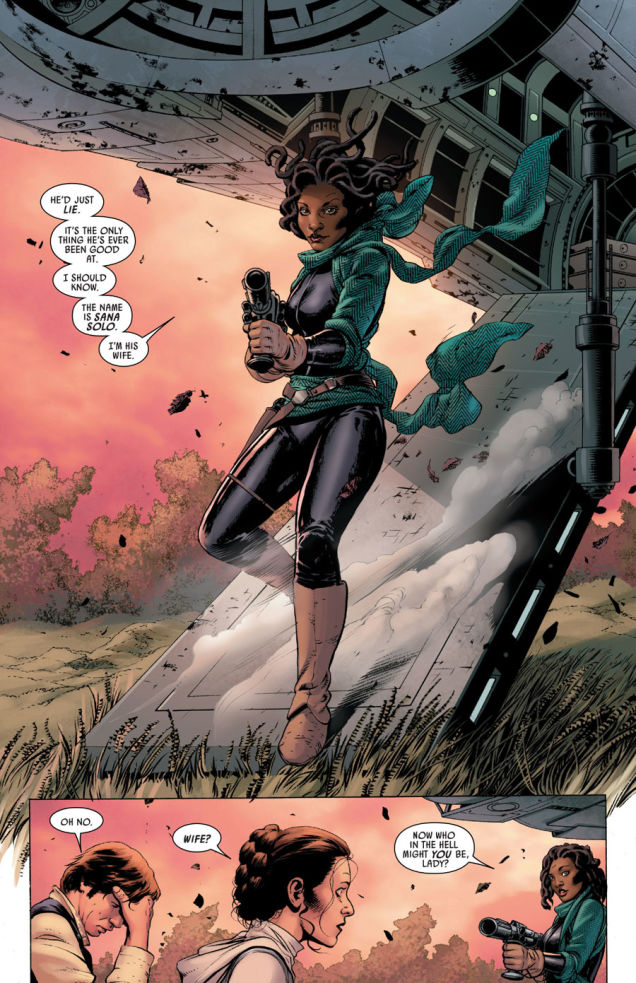 This is definitely a major game-changer. It adds a whole different and complicated layer to the already complex relationship between Leia and Han. It also generates a ton of questions. Is she really Han’s wife? How does this affect the The Empire Strikes Back scene where Leia tells Han, “I love you.”? What does this do to Han’s reputation?

Alison “Boom” Baumgartner over at ScienceFiction.com believes this revelation has turned Han into “a philandering liar, and add that to his mileu of other flaws, and Han just isn’t that likable anymore.”(sic)
I even asked my Mom what she thought about Han Solo having a wife. She responded, “The thought never even crossed my mind. The whole idea of him having a wife is bizarre.”

As for me, I am optimistic. I believe Disney, Marvel, Lucasfilm, and Aaron have an idea of where they are going. There are a ton of options on the table in order to handle this new ripple into the mainstream Star Wars canon. Sana Solo could be another smuggler who lost in a game of chance to Han much like Lando. Instead of accepting the loss, she might be out for revenge. Hell, she might even be his sister; it isn’t like we haven’t seen that one before! There are plenty of avenues and I am looking forward to seeing where Aaron will take this storyline in Star Wars #7. What does the future hold for Sana Solo? And for those doubters remember the words of Darth Vader, “I find your lack of faith disturbing.” 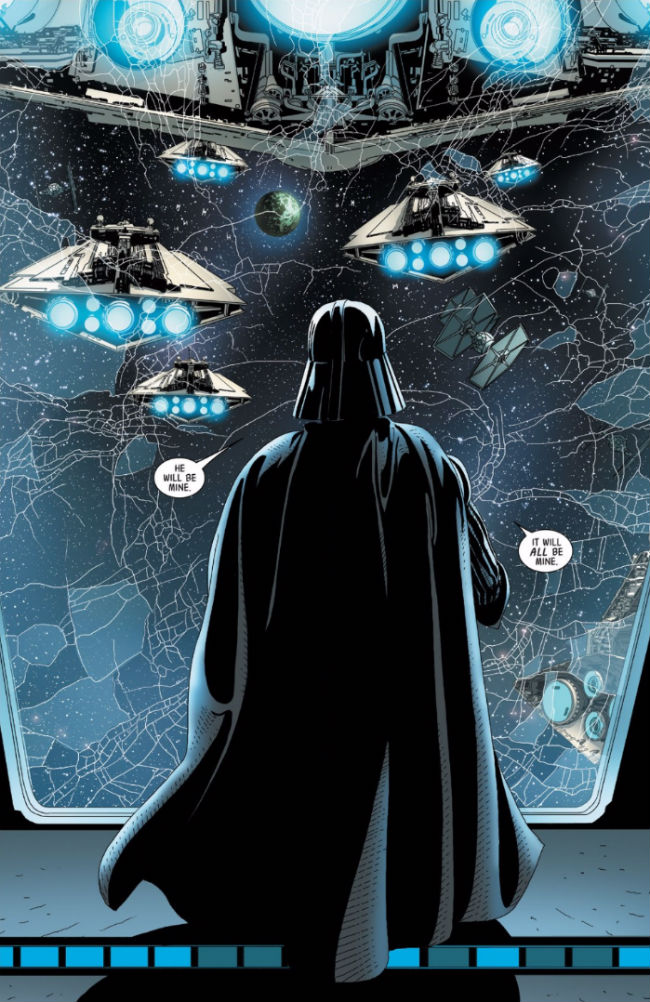 Speaking of Vader, hidden behind the furor of Sana Solo is probably one of the most anticipated moments to be revealed in the comics. Darth Vader learns the identity of the pilot who destroyed the Death Star. His name, of course, is Skywalker.

More importantly, Vader learns of the Emperor’s deception. The crack in the Dark Side of the Force has formed not only figuratively but literally. Vader’s anger sends force waves emanating from him cracking the window. It is an extremely powerful display of anger. Vader’s emotional rage was so strong it could not be contained in just one issue.

The scene is further developed in Darth Vader #6 as he recalls his time with Padme and his recent memories of Luke Skywalker destroying the Death Star and engaging him in combat on Cymoon I. These memories only increase Vader’s anger as he looks out through a cracked window onto a fleet of Star Destroyers pronouncing, “It will All be Mine.”