Dorren Green, AKA Squirrel Girl is a long-time super hero of the Marvel Universe (MU). Although it seems unlikely, Squirrel Girl has been in the MU for over twenty years now! Now, that’s not saying much given characters like Iron Man or Captain America are both over fifty years old. But for a character like Squirrel Girl to last for more than a year let alone twenty is surely impressive given that she was originally a joke character. It says something about how even “joke characters” can rise to super star status with the right writers, artists and a bit of luck.

Speaking of the right artists, the one and only Steve Ditko first drew Squirrel Girl back in January 1992 in Marvel Super-Heroes vol. 2, #8. While the idea was conceived by Will Murray, Ditko would plot the basic beats of the story and Murray would handle the script.

In an interview in 2009 with Jazzmaonline.com Murray described how Squirrel Girl came to be:

Actually I created Squirrel Girl in script form without any artist input. Tom Morgan was originally going to draw it, but when he dropped out, I requested Ditko and got him. Ditko did a great job in bringing my baby to life. He invented that knuckle spike. It wasn’t in the script. I based Squirrel Girl ironically enough on a long–ago girlfriend who read comics and was into “critters”—wild animals of all types. Coincidentally, she was big Ditko fan. I think I got the idea because I had a bunch of squirrels running around my roof and sometimes coming in through my open bedroom window and inspiration struck.

Given the then current climate of comics in the 90s which were mostly gritty and dark, Squirrel Girl’s first outing is especially noteworthy. Not just in terms of it being her first appearance in comics but just how drastically it went against the big universe plots and serious tones of the comics of the day.

The plot of it starts off simple enough: Iron man is flying through a forest near Stark Industries testing out some new equipment. All of a sudden he is jumped by a mysterious figure who turns out to be someone calling themselves, “Squirrel Girl”. Squirrel Girl then handily takes Iron Man to the ground and reveals to him her interest in being an Avenger.

One problem with this, besides Iron Man’s general reluctance, is that Squirrel Girl is only 14.

Still, she persists. She shows him how high she can jump (but as Iron Man says, “So can the Hulk.”). She explains that she is a mutant and she shows him a spike that protrudes from her knuckle. But as Iron Man points out, it surely isn’t in the class of Wolverine claws. Squirrel Girl also mentions how she can chew through wood easily, talk to squirrels and is generally very chipper (no pun intended) about her prospects of joining the Avengers.

Out of nowhere, Doom ambushes Iron Man and Squirrel Girl, capturing them both.

Doom locks Iron Man in energy-draining shackles but he decides to leave Squirrel Girl to her own devices. He believes her to be no threat to his plans. This ends up being a huge mistake. Squirrel Girl uses a button to open up a vent in Doom’s airship. She then calls squirrels from all around the nearby forest. Her army of squirrels starts chewing the wires in the ship causing it to malfunction and free Iron Man.

At which point Iron Man says, “I take back every bad thing I ever said about squirrels.” Squirrel Girl, not missing a beat replies, “Hey! What did you say about squirrels that was bad?”

Before we can get an answer we are graced with one of the best panels in all of comics.

Dr. Doom is surrounded by squirrels exclaiming, “Confound these rodents! For everyone one I fling away, a dozen more vex me!” 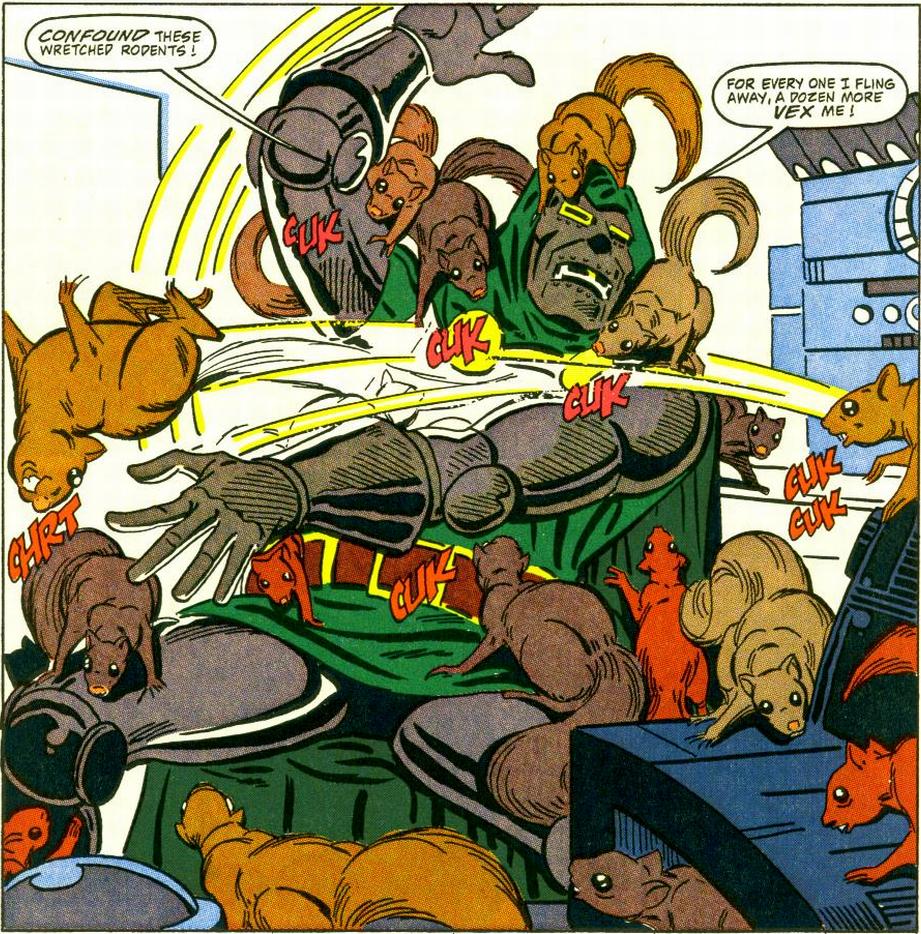 Doom manages to escape his ship and Iron Man by diving underwater. After this, Iron Man says when she comes of age and she’s still interested in being a hero that he’ll put in a good word for her with the Avengers. He wishes her luck but she simply responds, “I don’t need luck. I eat nuts.”

The issue ends with Iron Man wondering who at the Avengers will believe his story.

Although I mentioned earlier that Squirrel Girl has technically been around for over twenty years she unfortunately has only been sporadically utilized. Thus she did not appear again except for a one panel cameo in ’92 and an oblique reference in [easyazon_link identifier=”B00C2DNAQO” locale=”US” tag=”bounintocomi-20″]Deadpool #7[/easyazon_link].

It wasn’t until 2005 when Dan Slott, the current writer of [easyazon_link identifier=”B00RWSR39Y” locale=”US” tag=”bounintocomi-20″]The Amazing Spider-Man[/easyazon_link], re-introduced Squirrel Girl in the Great Lakes Avengers (GLA). The GLA was a team of ragtag heroes who had near useless powers. Squirrel Girl and her partner at the time Monkey Joe were included. While a member of the GLA Squirrel Girl would successfully defeat such varied opponents as M.O.D.O.K., Thanos, Deadpool , Fing Fang Foom, Deadpool and more.

Eventually Squirrel Girl felt like she was actually holding the GLA back from their full potential and was doing most of the work for them. So she left to go off on her own.

Squirrel Girl would go on to become a pseudo-member of the New Avengers by becoming a nanny for Luke Cage and Jessica Jones’ daughter. In her spare time she also attended New York University. One memorable scene from this time period involves Wolverine who, it is revealed, may have had a past romantic relationship with her. Wolverine and Squirrel Girl end up sparring and not only does she defeat him but she defeats him in one-on-one, hand-to-hand (no claws) combat.

You’ve probably caught on by now that one of Squirrel Girl’s most notable traits is defeating enemies that at least, theoretically should be a lot stronger than she is. Most notably characters like Thanos, M.O.D.O.K., Wolverine, and Deadpool.

According to Marvel.com her stats are all maxed out. She is on par with The Living Tribunal in terms of her strengths. If you don’t know who that is, he’s nothing much, just basically a celestial god that has existed for as long as the universe has been around.

Squirrel Girl also wins fights because her opponents frequently underestimate her due to her cuteness, ridiculous powers, and general chipper demeanor. It’s also worth noting that Squirrel Girl was one of the few mutants to retain her powers during the House of M storyline. In this storyline Scarlet Witch took away the powers of almost all mutants on Earth.

As you can see, Doreen’s kind of a big deal.

She could easily be compared to Deadpool. They’re both joke characters for example. But whereas many creators (notably Joe Kelly and more recently Brian Posenh and Gerry Duggan) have treated Deadpool as a joke character in very serious situations that is often (though not always) not the case for Squirrel Girl
The original squirrel Girl remained lighthearted. The most serious thing she mentioned was the way the other kids teased her in school. They thought she was weird. The GLA Squirrel Girl was mostly there for comic relief, breaking the fourth wall, defeating outrageously strong villains, and so on. It was only until she became a nanny for Luke Cage and Jessica Jones that she started to get a bit more character and insight along heavier themes thanks to the writing of Brian Michael Bendis.

The latest series, [easyazon_link identifier=”0785197028″ locale=”US” tag=”bounintocomi-20″]The Unbeatable Squirrel Girl[/easyazon_link] written by Ryan North with a lot of the art being done by Erica Henderson goes back to her comedic roots. And in the coming articles, I’ll be examining each issue and (among many other things) whether diving back into her comedic roots was the right thing to do or not.

But hey, spoiler: It was.