A young girl, who is obsessed with candy and her teddy bear, has been raised from the dead and entrusted with the protection of ancient artifacts. Will she be able to keep them safe from the likes of the Red Sun Corporation or will she fall prey to the artifacts herself? 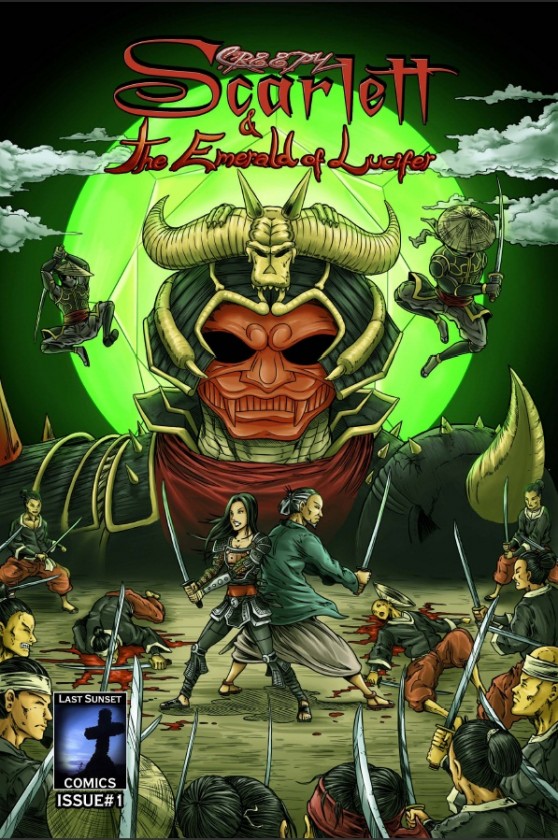 Creepy Scarlett follows the life of the titular character as she fights off evil Samurai warlords and contends against crazed, giant lollipop-wielding clowns. Writer Graeme Buchan introduces us to Scarlett as a young adult who really hasn’t achieved the term “adult” yet. She is obsessed with her teddy bear and candy. However, her non-adult attitude allows Buchan to insert a lot of one-liners that had me cracking up throughout the book.

Scarlett will make a note that the Emerald of Lucifer is quite small after her guest makes a big deal out of it. Another instance is when one of her mentors tells her to Fire at Will. Without hesitating, she asks which one is named Will? It’s great.

Buchan does a good job of not only clearly crafting a unique and endearing character with Scarlett, but he creates interesting antagonists (to say the least) as well. Vincent is a cunning and devious villain who is willing to sacrifice his own allies and even his own brother in his quest for power. While Trixie is a psychotic, overly demanding clown who gets her way or else.

I also enjoyed how he was able to awaken Scarlett’s rage and anger when the Emerald of Lucifer manifests its power within her. She leaves Mr. Ted, her teddy bear, at home and is not thinking about candy at all. Her innocence is taken and replaced with hate as she goes on the warpath seeking vengeance.

Not everything is rosy. There are times when Scarlett’s feeblemindedness gets a little too hard to handle and you find yourself shaking your head in disbelief. There is also a page where Billy, the farmhand, happens upon the church where Scarlett lives. However, he finds the church abandoned and promises to find Scarlett. There is no follow-up on this storyline at all over the next half of the collected edition. It just ends. 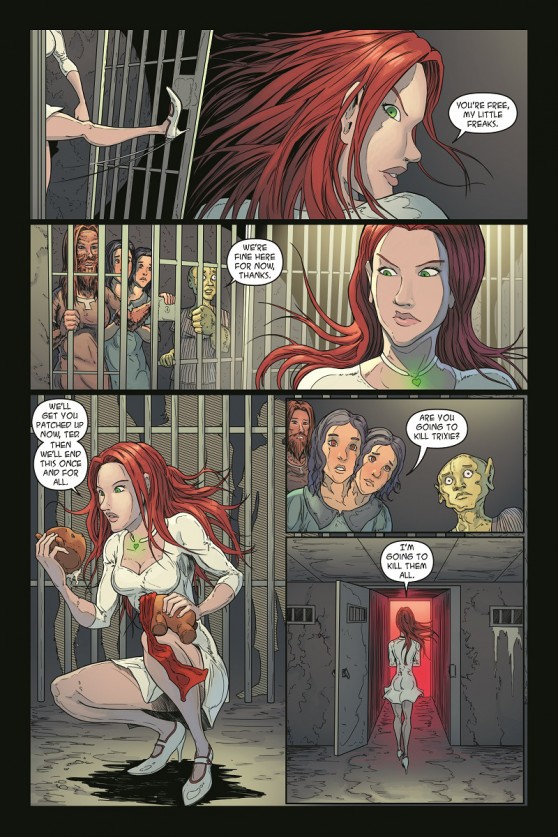 The artwork by Felipe Sanhueza had its ups and downs. The first quarter of the book was great; you could see the emotion in the character’s faces and imagine yourself in the world. I also enjoyed Sanhueza’s depiction of the demonic Samurai armor with the orange mask and two fangs.

The action sequences were fun and he used a number of different panel layouts. One very interesting one consists of a full page horizontal panel with five rectangular panels beside it to the right. It was an effective display of detailing a chase scene.

However, towards the end, the positioning of Scarlett’s and Vincent’s eyes is noticeably off. Their left eyes slowly drift on top of the nose. It is quite off-putting. There is also the case of Vincent’s assistant, Emily. Her hair somehow changes color from appearing blonde to having a grey hue. It was difficult to figure out who she was because of the different hair color.

Creepy Scarlett was a fun read with a quirky yet strong female protagonist. You can’t really refer to her as a hero just yet because she has a tendency to get a little crazy especially when possessed with the Emerald of Lucifer. Graeme Buchan’s writing was fun with plenty of one-liners that had me cracking up. He does a good job of introducing a multitude of characters and providing them with distinctive personalities. However, the artwork was up and down. During the action sequences it was fun and exciting and captured a variety of different combat styles and techniques effectively. Yet some of the characters’ body proportions and eye positioning was off to the extent it became distracting. There was also a major continuity error regarding Emily’s hair color which made it difficult to identify who she was.