In [easyazon_link identifier=”B00ZD15O34″ locale=”US” tag=”bounintocomi-20″]Imperium #6[/easyazon_link] Toyo Harada has gathered a most fearsome group of beings and launched an attack on Rising Spirit’s base of operations. He aims to acquire Rising Spirit’s cold fusion reactor and its inventor. Will Rising Spirit CEO Morris Kozol be able to stop him or will Harada succeed in his mission?

Unlike the first five issues of [easyazon_link identifier=”1939346754″ locale=”US” tag=”bounintocomi-20″]Imperium[/easyazon_link] which highlighted an individual character in each issue, Imperium #6 is a massive action scene depicting Harada’s raid on Rising Spirit’s Leviathan submarine. Due to the nature of the comic, it is extremely fast-paced as you flip the pages wondering whether the mission will succeed.

All of the characters get their spot in the sun in this issue and Joshua Dysart uses these spots to continue highlighting the characters’ personalities. Dysart begins by debuting Lord Vine-99. He completely tears apart the new H.A.R.D. corps. He slices through them like a hot knife through butter. Despite completely overpowering them and taking control of the corridor, Lord Vine-99 continues to lust for blood seeking to not only defeat but destroy his opponents.

The focus switches from Lord Vine-99 to Harada as Dysart continues to develop his character. Upon rescuing Broken Angel, his will and dominance is challenged. No longer does he find himself the superior being. It softens him and he actually displays some humility; there might even be a hint of shock and compassion upon discovering Broken Angel’s human experiments. 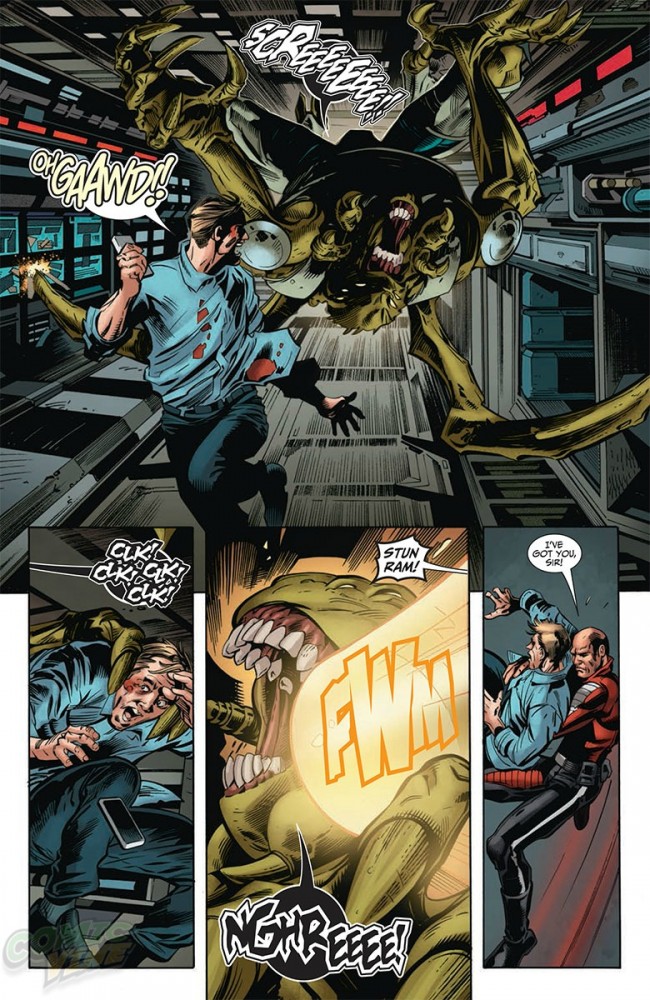 Harada’s character development progresses during a point in the battle when his psiot abilities are taken away. He finds himself ill equipped to defend his teammates and utterly exposed. It was interesting to note the change in his physical appearance as well. He no longer had a full head of hair; instead, he was gray and balding. It was definitely interesting to see Harada depicted in such a state of weakness and having to rely on others.

Dysart’s writing is once again brilliant. He masterfully conveys the panic among the Rising Spirit crew, the arrogance of Broken Angel, the bloodlust of Lord Vine-99, and the compassion of Sunlight on Snow all while challenging them with a number of problems whether it is psiot dampeners in the case of Harada or a sealed entrance to the control room for Sunlight on Snow. These challenges do not feel forced or staged. They flow extremely well and are believable. Harada’s plan doesn’t go perfectly and they have to adapt and overcome.

As for the artwork, I am still getting used to Scot Eaton because Doug Braithwaite’s work was so good on the first arc, but Eaton really shines in this episode with the chaotic atmosphere. He captures the movement of Kozol and Lord Vine-99 perfectly as Kozol flees in absolute terror. He uses small dashed lines along the bottom of the submarine to capture the panicked movement The small details emphasize the tension in the scene with the blood staining Kozol’s shirt as it comes untucked and Lord Vine-99’s claw scraping the sides of the vessel. 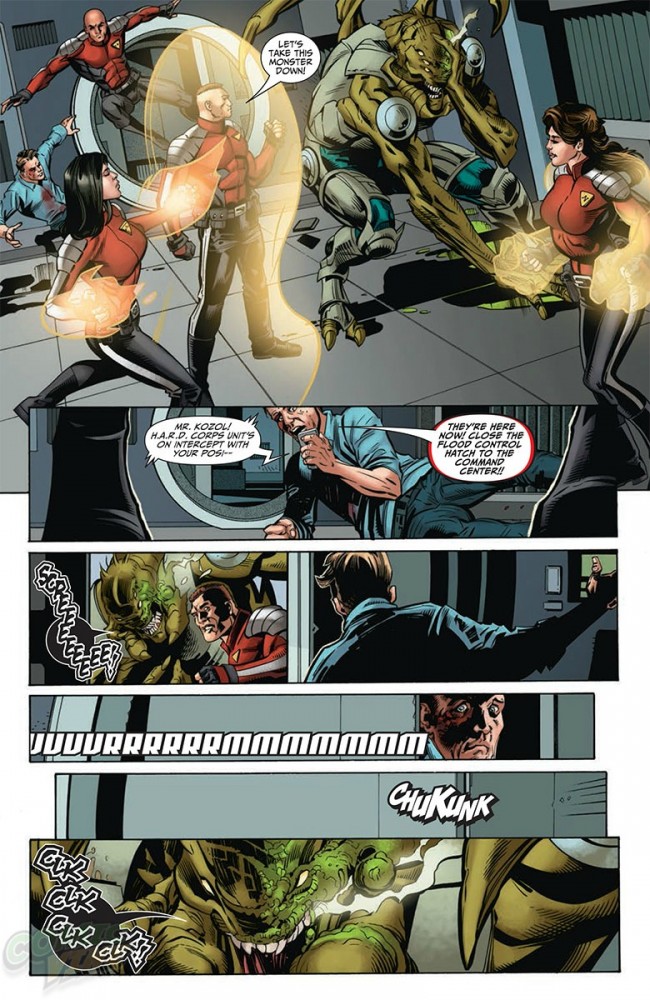 My favorite panels are those depicting Harada using his psiot abilities to scan people. They are blurry, showing hints of what lies within the scanned brains. You never get a true sense of what Harada is acquiring or grasping when he does the scan.

There was also good synchronization between Eaton and Dysart. Broken Angel asks if Harada would impregnate the Angela Vessel. In the next panel Eaton puts Broken Angel’s pelvic area in the foreground to highlight the idea of pregnancy.

The only complaint I have about the artwork is the depiction of human bodies being molecularly ripped apart; it looks like pieces of confetti flying from their bodies than actual tissue. It looks weird. There was also one minor grammatical error when Gravedog mentioned he was “en route on Lab D.”

Valiant Comics and Joshua Dysart continue to deliver an excellent story with [easyazon_link identifier=”B00ZD15O34″ locale=”US” tag=”bounintocomi-20″]Imperium #6[/easyazon_link]. It is action packed, but still manages to capture character moments and even exposes Harada in a different light as he finds himself weakened and even mentally challenged at parts in this issue. There were only a couple of minor errors that can be easily overlooked because this book was just plain enjoyable. If you aren’t pulling this one, you should.