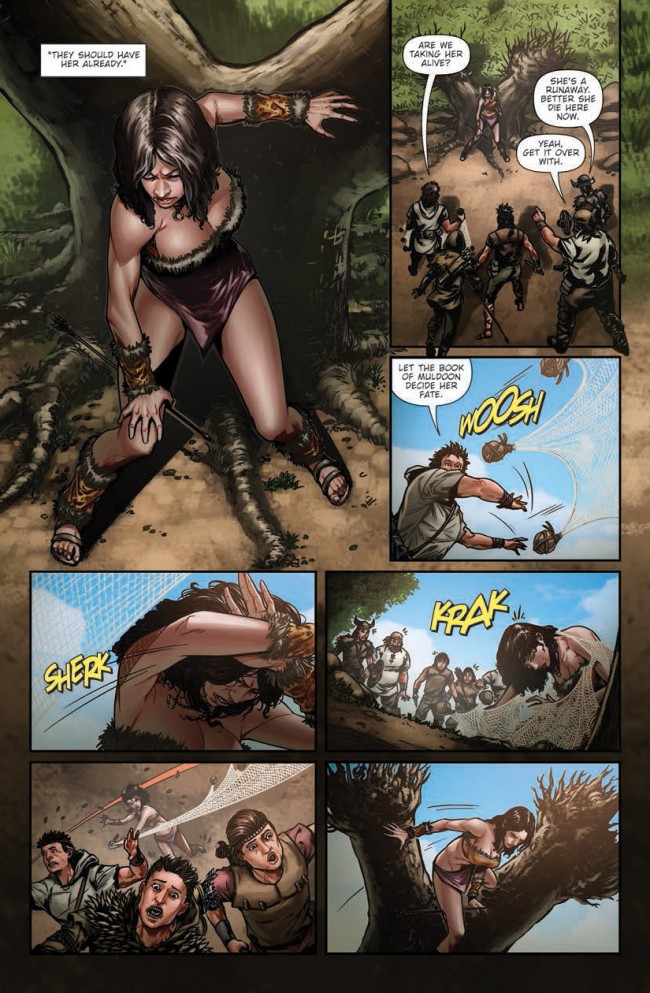 Writer and creator Damian Wampler begins Sevara #1 by displaying the evil of Mitan as he plots to deprive his villagers of water until his slave is returned to him. This evil plot transitions into an action-packed chase scene as the runaway slave attempts to avoid zealots who wish to punish her with fire and stone.

The writing in the chase scene is decent; it gives us a sense of the villagers’ attitudes towards slaves and what they do to those they capture. However, once the slave is cornered, the dialogue seems very strange as most of the villagers decide on ending her life. Despite their clamor, the next panel details adherence to the Book of Muldoon as they attempt to capture her instead of killing her.

There is also a minor continuity error during the chase sequence. An arrow that pierced the slave’s right thigh magically disappears four panels later and then reappears again.

Aside from this minor continuity error, the chase scene is really fun and fast-paced. Artist Andre Siregar introduces the title character as she uses a staff and her physical strength to subdue the slave’s pursuers. He uses two pages with seven panels each to depict the action. It all leads to a splash page with Sevara standing atop the defeated villagers. It was a great build-up and introduction.

After the fast-paced introduction, Wampler slows the pace down and begins to focus on how the Book of Muldoon controls and manipulates not only the villagers, but the king as well. Wampler describes how fear controls their lives; so much so, the slaves are banned from burying their dead. The rescued slave is defiant and begins to bury the dead with the help of a few other slaves. 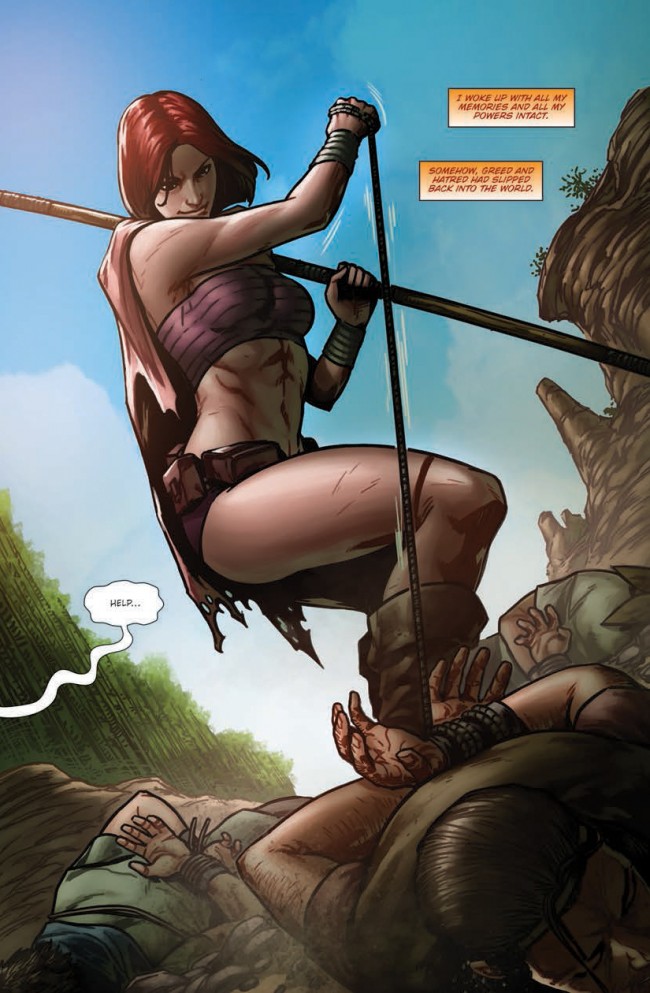 Mitan and his advisors will not tolerate this defiance and the water they were depriving the villagers of is now used to wipe them out. It is an interesting dynamic, reflecting the dual nature of not only water, but of humanity as well.

During this flood scene, Wampler flashes back to a very different time. Sevara is in an orphanage and the other orphans place bets on which one will be the next to leave. The scene really sticks out and I didn’t really understand its purpose. It just seemed to be stuck there. Hopefully in the coming issues this scene will have more meaning to it, but as it currently stands, it is just a tad confusing.

The issue closes out with some fantastic pages by Andre Siregar. He details a dream of the past and how life was peaceful and harmonious. The main sticking point is the depiction of this angelic figure with smoky waves flowing behind her. He uses the figure to connect a number of small circular panels depicting everything from people dancing to horses running wild to individuals smiling and laughing. Anang Setyawan’s colors bring to life the happiness depicted on these pages. The choice of blue fading into a piercing white exudes a sense of hope. Steve Wands’ letters top off the sequence by creating thought clouds and outlining them in blue and purple while putting the text in italics. It adds to the happiness and joy of the scene.

Finally, the issue comes to an end on a very strange note. Despite Sevara’s use of violence earlier in the issue, she advocates against it as Mitan’s men close in on her. It seemed a little bit out of character based on the previous pages, but it seems she has a plan. 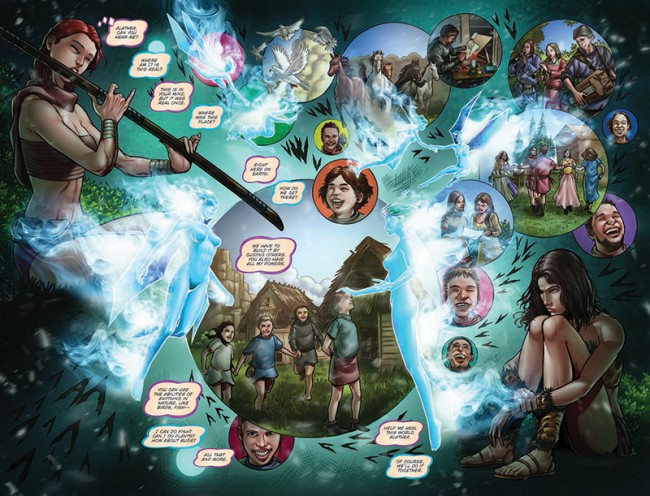 Sevara #1 has some very bright spots, but it also struggles in some areas as well. Andre Siregar’s artwork is good and even fantastic during the dream sequence with unique panel layouts. Everything comes together in this scene from the art to the coloring to the lettering and to the writing.

However, there are interesting character moments for both Sevara and Mitan that don’t seem to fit in with what we have previously seen of their actions. The flashback to the orphanage seemed completely out of place and didn’t flow with the rest of the story.

Wampler’s writing does a good job of displaying the evil of Mitan and the Book of Muldoon and he even adds some humor through a couple of Mitan’s bumbling aides. However, it too struggles at some points where the dialogue seems to go against itself like the chase sequence.

Sevara #1 is an interesting supernatural story depicting the fight against oppression and fear that I plan on continuing to read. You can purchase Sevara #1 on Comixology.