In [easyazon_link identifier=”B00ZV8RU18″ locale=”US” tag=”bounintocomi-20″]Justice League #42[/easyazon_link], Geoff Johns splits the issue into four stories. The first focuses on Superman and his impending trial on Apokolips. The second gets us into the head of Wonder Woman as she combats her Amazonian sister, Grail. The third lets us in on why this war is occurring and who the major players are, especially if you are unfamiliar with Justice League canon like me. This happens with the discovery of Myrina Black by Mister Miracle. The fourth story focuses on the rest of the Justice League as they encounter Metron and the Mobius Chair and attempt to get answers of their own.

During the first story line the highlight is Darkseid’s presence. Johns with artist Jason Fabok and letterer Rob Leigh encapsulate his command, strength, and resolve. The way Fabok draws Darkseid with his back to the reader looking over Apokolips displays his power. Johns lets these powerful images build-up as Steppenwolf, one of Darkseid’s generals, brags about killing Superman. After Steppenwolf finishes his blustering, Darkseid questions his general. He asks his questions in a demeaning fashion, treating Steppenwolf almost as a child and chiding him over his lack of foresight. Rob Leigh emphasizes Darkseid’s powerful emotions by changing the font size and adding some italics to emphasize the ferocity in his voice.

Jason Fabok’s action scenes are dazzling and he is able to capture the character’s emotions in battle. There is one panel with Wonder Woman leaping to attack a number of shadow monsters; her face is pure determination. Colorist Brad Anderson highlights her attack’s ferocity, fading the orange from a bright white directly behind Wonder Woman to a darker orange the further away the colors are from her. 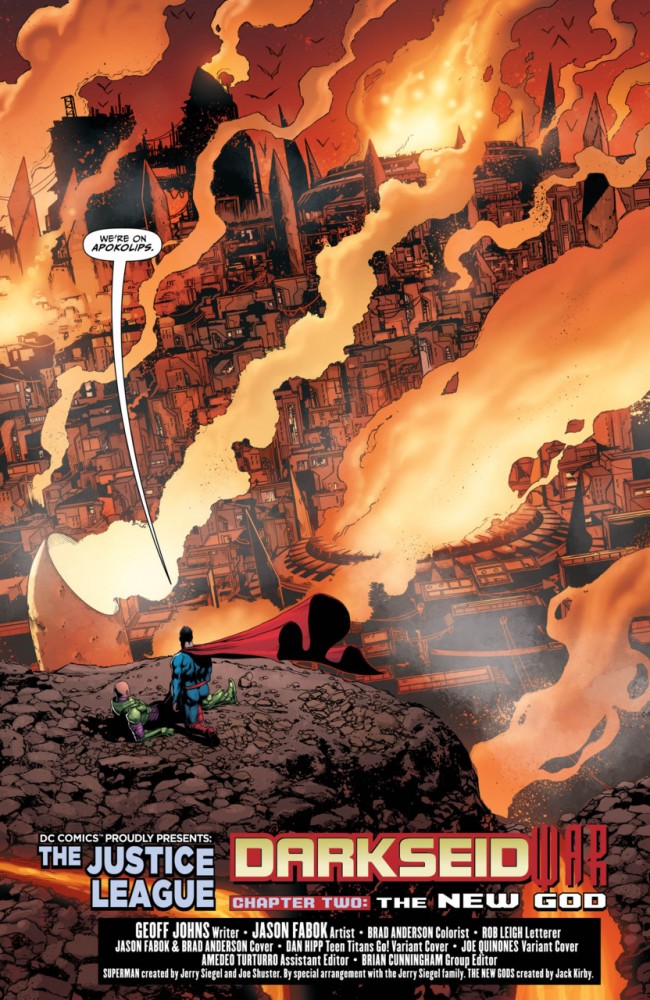 Some of the best panels are Fabok doing a close-up of a character’s face. Metron has a small smirk as he saves the Justice League from the Anti-Monitor. It oozes “I am better than you.” Another example is Grail looking up at the Anti-Monitor. Her lips are slightly pursed and rain is dripping down her chin. It reeks of pure evil arrogance.

During the third story, Johns is really able to let the reader in on what exactly is happening and how it has come to be. Myrina Black has played the long game and her strategy is finally coming to fruition, putting all the pieces on the table. The way he conveys the plan is a little heavy-handed. Myrina goes off on a monologue describing her plans to Mister Miracle in an attempt to convince him to join her cause. It is great to get an idea of what is happening, but this takes away from the final story line as the Justice League attempts to figure it out as well.

The ending is really fun where Johns toys with us a little bit hinting at a massive revelation that will hopefully never be revealed. 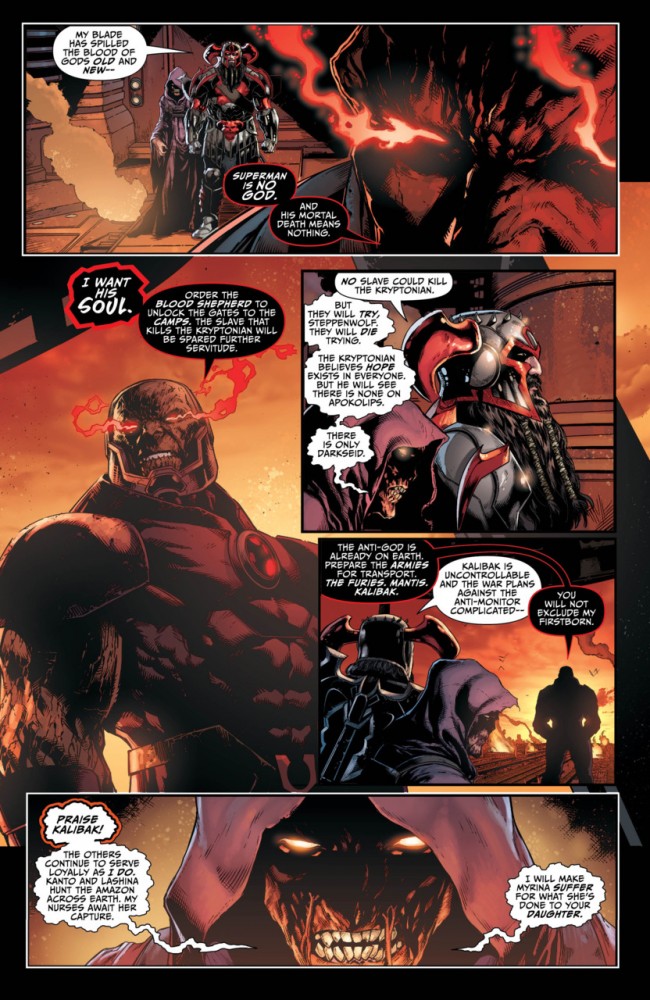 [easyazon_link identifier=”B010W6NWTC” locale=”US” tag=”bounintocomi-20″]Justice League #42[/easyazon_link] does a great job with characterization, specifically with Wonder Woman and Darkseid. Johns and Fabok with Rob Leigh capture Darkseid’s presence and command with a combination of artwork, lettering, and dialogue. However, Wonder Woman is characterized primarily through an internal monologue. The action scenes are exciting although none of the main characters ever seemed in imminent danger. The final story-line is used more to drive the plot than provide answers as Johns does that in the preceding scene. It takes away a bit of the tension.

The pacing was good and Johns balances the action with character development and plot movement. This story might be best to wait for a collected edition due to the number of different storylines and characters. It can be a little hectic remembering what happened in the previous issue. [easyazon_link identifier=”B00ZV8RU18″ locale=”US” tag=”bounintocomi-20″]Justice League #42[/easyazon_link] definitely gives off the vibe it is building to an epic climax and it provides a fun journey along the way.