Marvel’s Ant-Man made the jump to the big screen over the weekend. Con-man Scott Lang must take on the role of Ant-Man in a daring heist to protect the world from the out-of-control Darren Cross. Is it worth watching?

In short, yes. Ant-Man is definitely worth watching. However, it is not without its faults, but before we get into those let’s take a look at its strengths.

Marvel has done an excellent job with its casting for the majority of their Marvel Cinematic Universe. Obviously, there have been some duds, but Ant-Man does not make that mistake. The cast is absolutely phenomenal.

Evangeline Lily, as Hank Pym’s daughter, Hope van Dyne, might not have gotten a lot of dialogue in the beginning half of the movie, but every time the camera panned her way there was either a look of disgust, shock, or disappointment. Her facial expressions were able to relay what she felt so effectively some lines of dialogue should have been completely removed because they were so easily seen on her face.

Michael Douglas as Hank Pym nailed his character. He was grouchy, arrogant, and hard. However, as the movie progressed, he also was able to unveil a softer more compassionate side. Douglas created a hard exterior meant to not only keep the audience out but the other characters as well, but he eventually lets you in and was my second favorite actor throughout the entire movie.

My favorite actor and the one who stole the show every time he was on screen was Michael Peña. The first moment he is on screen and every moment thereafter I was cracking up and so was the rest of the audience. It wasn’t just the lines he delivered, it was the way he delivered them and the general attitude he took in bringing his character, Luis, to life. I really hope to see more of him in upcoming Marvel movies!

Paul Rudd was stellar. He was able to not only capture a loving Dad, but a down-on-his-luck con-man. He blended humor and seriousness expertly. He was able to awkwardly break the tension of an extreme emotional moment, but also turned a somewhat humorous part of the movie into an emotional attachment.

Corey Stoll did a good job of portraying the villain. He definitely had the evil vibe going from the first time we saw him. He did an excellent job of portraying the subtle passive aggressive attacks at Pym. However, he was limited in his ability to really shine. He was very one dimensional and there was no room for growth with the character.

The character of Darren Cross was actually one of my biggest disappointments with the movie. There was an odd plot device used to explain his behavior; however, this was never really confirmed as there are a number of hints concerning his personality from the get go. Towards the end of the movie his knowledge of what is happening also seems to be a little farfetched and the movie never really explains how he knows what he knows. We are left trying to figure it out.

This isn’t the only instance where we are left hanging. There are a number of other times concerning Cross where we have to suspend our disbelief or at least imagine the step (point B) in between to get from point A to point C.

Another setback is the use of some heavy exposition explaining the risks of the suit via dialogue between Pym and Lang. This had already been laid out before us in other scenes and didn’t really seem all that necessary and could have been cut out. 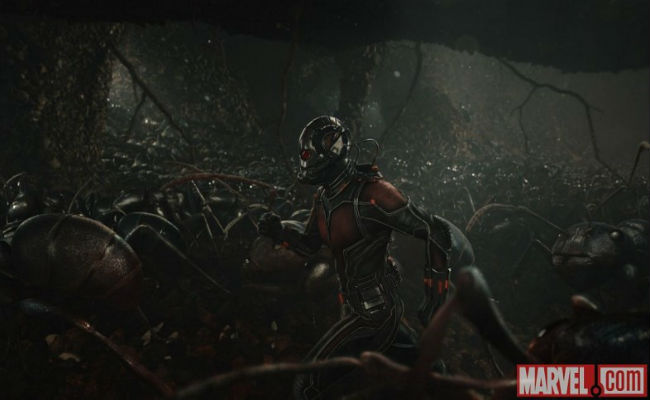 Now that we have gotten the bad out of the way let’s focus on the excellent. The movie excelled at combining humor with action and emotion. When you felt like it was getting too serious, Paul Rudd or Michael Peña and the rest of the crew would make a joke. When there weren’t any jokes or emotional scenes there were fantastic combat sequences that really highlighted the abilities of the Ant-Man suit and put some of the combat scenes into perspective which in and of itself was funny.

Director Peyton Reed also made excellent use of the ants, providing them with a number of different tasks to perform which had me saying, “Wow, that’s cool.”

Ant-Man was a fun action comedy with just the right amounts of both. The cast and acting was fantastic from Paul Rudd all the way down to Abby Ryder Fortson. Michael Peña was definitely the star for me. They used the CGI very effectively with both the ants and the use of the suit in a number of action sequences. This provided for high-octane scenes, but also hilarious moments when the perspective of the action was changed.

However, there were a few setbacks with the over-exposition in the beginning and a one-dimensional villain. The biggest problems were the few plot holes we had to use our imaginations to fill.