This article first appeared on Matt Battaglia’s Tumblr and was republished with his permission. 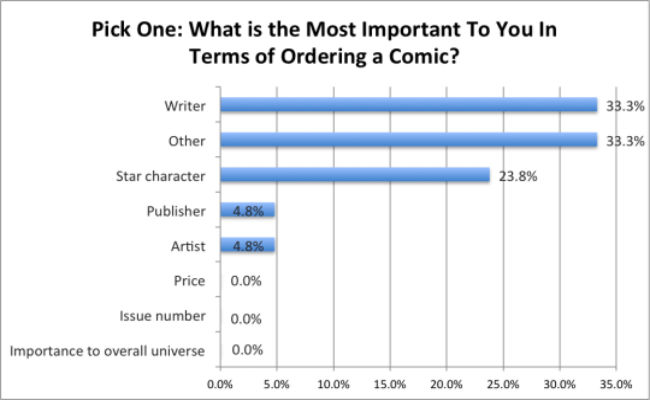 And: SKTCHD Survey: The State of Comic Book Retail

In case you didn’t read the article, this survey is RETAILER (important detail) focused:

What drives the most orders in comics? Retailers were asked that, and while it’s clear the writer and star characters are important for retailers, the co-lead for this question was other, and with good reason. Many retailers suggested it’s impossible to decide off one characteristic, and that it is more important to factor in all of the above. I’m sure all involved would agree with that statement.
So read that or look at the chart or both. I’m particularly addressing the chart above, and the general social media ‘uproar’. I’m going to be using my experience on Roche Limit (which you can buy here: https://www.comixology.com/Roche-Limit/comics-series/25115?ref=c2VhcmNoL2luZGV4L2Rlc2t0b3Avc2xpZGVyTGlzdC9zZXJpZXNTbGlkZXI or at your local comic shop) as my example and point of reference.

Some more background to what I’m specifically responding to…

The current ‘conversation’ (if we call anything on Twitter that…) is that artists do the lion’s share of the work and get the least credit when it comes to interviews, press, and the chart seen above. So ok, why is that, and what can be done to fix it?

And a forewarning – I have a tendency to ramble, write run-ons, and tangent. So readers beware.

Lets talk about how a comic book is marketed and sold (I did a rather poor breakdown of how comics are made a while back: http://mattjbatt.tumblr.com/post/95919689478/breakdown-of-comics-roles), because most of the answers for the disparity in the chart above are going to be here. And keep in mind, we’re talking about creator-owned books, I don’t have any experience with Big 2 work, and books for companies like BOOM can fall in a variety of categories. So for the sake of keeping this relatively focused – we’re talking about creator-owned books where the creators retain rights and are paid on the back-end.

With creator-owned books, and in the case of Roche Limit, the writer tends to take on the role of project manager, PR and marketing, as well as writing the book. In the case of Roche Limit, Mike’s the one making sure pages are in and complete on time, he’s spent a ton of time building up relationships with people at press outlets so that when he reaches out they’ll at least review the book or do an interview, he’ll send out emails to retailers that he’s built relationships with and get them previews of the book.

Overwhelmingly – the writer is the one doing the retailer relationship building. Which should at least explain the chart that was shown at the beginning. I’d wager that for creator-owned books it’s overwhelmingly (and if this isn’t the case – please let it be known) the writer who’ reaching out to the vast majority of shops, scheduling signings, setting up variant covers, and doing the necessary check-ins to maintain those relationships. So my guess would be when the retailer is looking through previews, they’re looking for known quantities, and in most cases – I’d bet the writer is the one they know. They’re also the easiest to qualify – an artist may consistently deliver quality artwork, but as much as I worship at the throne of Romita Jr. he’s done some books that I really aren’t great – and it’s because of the writing/story – not the art (which is always glorious).

Now the larger argument, and the one that has little to do with the chart that actually kicked this latest round of arguments off, is crediting in media/press. Which lets be fair – has gotten way better than it used to be, sites like Multiversity and Adventures in Poor Taste! are generally good at actually talking about the various aspects of the book. With regards to reviews – part of it is that you have to look at it from a reviewers perspective, not everyone knows all the ins and outs of how comics are made, and for the most part they write what they know, and story’s a pretty easy place to start. Art takes a higher level of understanding of craft to talk about, in any critical form beyond, ‘I liked it, or I didn’t like it’. If this weren’t the case I think we’d see more reviews mentioning panels with poor perspective, wonky layouts, confusing staging, stiff characters, wrong proportions, etc (awful overly purple color schemes….). I’d just ask that folks consider where someone writing a review is coming from, they’re generally not paid (and if so I doubt it’s buying them more than a couple light beers, and if they’re in NYC it’s maybe buying one), and lets be real – the standard for journalistic integrity in the actual media is a constantly lowering bar, so if the barely-paid comics review blogger makes a mistake and doesn’t properly credit – lets cut some slack, and also say ‘thanks for promoting my book for FREE’, because – proper credit or not – they’re helping you push copies, which hopefully means more sales and more money for you at best and nothing at worst.

There’s also the ‘interview disparity’ – which – comes back to that same relationship deal earlier – Mike’s the one on the team who keeps in touch with the press, sends out preview copies, and hustles his ass off to pick up some interviews, get the trailers that we’ve cut placed in things like EW, and he even put together a press-guide for the art team so when we did press we’d all be on message regarding the story (pro-move). When he does interview he name drops the team constantly, but he’s the one doing the media hustle, and if his name gets dropped more often, that’s A-OK, because it’s a team effort, and his success just benefits the rest of the team.

Classic quote, this being Truman’s phrasing:

It is amazing what you can accomplish if you do not care who gets the credit.

I think in comics people are always concerned about credit and the public eye, but if you’re a team – if you’re in creator owned comics and you’re not a team, maybe rethink your choice of collaborators – it shouldn’t matter who’s getting talked up, because it just feeds back into your wallet.

But some things to consider if you’re an artist and maybe want to boost your position in the public eye or the media push of your book.

If you’re so inclined, please sign up for updates on something new too: http://bit.ly/1MnexiZ