Magneto was one of the first comics I started pulling when I really got into comics just a little over a year ago. The series has had its ups and downs, but as we get to the seemingly end of the run, will Magneto’s last stand fade into oblivion or will it be something all mutants will remember?

Cullen Bunn begins [easyazon_link identifier=”B0111DRBY2″ locale=”US” tag=”bounintocomi-20″]Magneto #20[/easyazon_link] by asking a pretty deep philosophical question regarding alternate versions of yourself. It really sets up a possible deep discussion of what Magneto’s alternate self might look like; however, Bunn doesn’t explore this beyond the first page. He just leaves it alone.

Instead, he takes the story in a different direction, focusing on Magneto’s relationship with the women in his life, mainly Briar Raleigh and his daughter, Polaris. These relationship scenes, which are primarily flashback scenes, are bookended by the ongoing fight between Magneto and the invading Earth’s Sentinels.

The relationship scenes are a little odd, especially the first one focusing on Briar and Magneto. The scene begins with a long-winded monologue of Briar explaining her allegiance to Magneto. It culminates in a weird power struggle between the two. It seems the conversation was added to the book merely to reveal Briar’s motive for assisting Magneto. In a strange way, it resembles Stockholm syndrome.

Unfortunately, Bunn takes this idea and magnifies it in a scene involving Briar and Polaris walking through a club full of people just like Briar. These people have been injured in some way by Magneto, but have survived and almost deified him. Thankfully, Bunn is self-aware and uses Polaris to point out the creepiness of the whole scene. 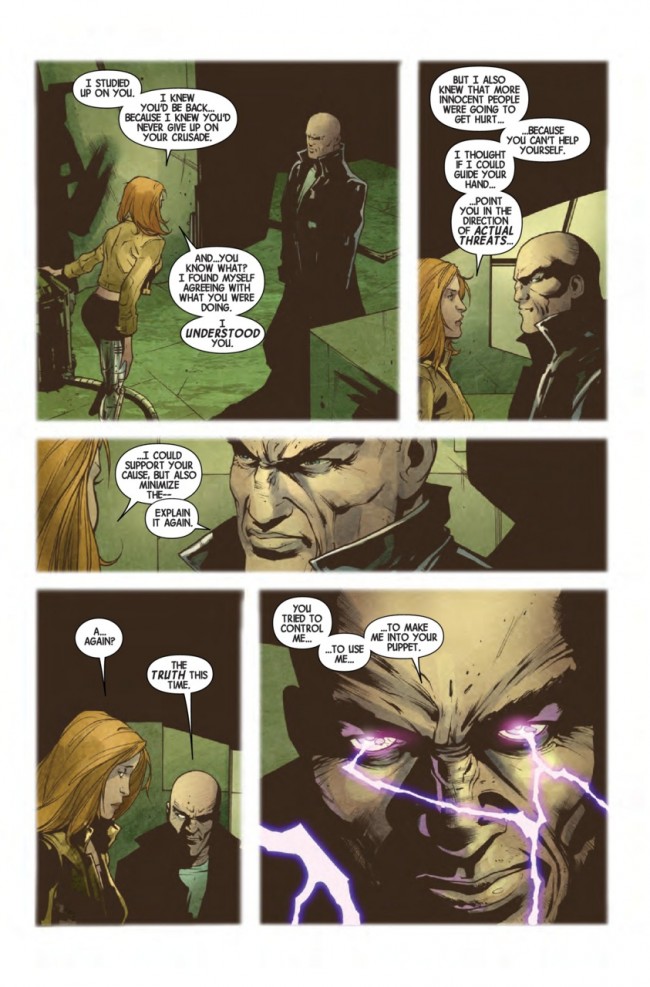 Outside of the relationship scene, the book reads like an episode of Dragon Ball Z. Magneto is constantly powering up with electric sparks flying about his body. Instead of making Magneto’s hair turn yellow and grow out to depict the increase in his power, artist Paul Davidson increases the amount of purple electricity on the panel and the number of places or emanating from on Magneto’s body.

Davidson’s artwork struggled in a few areas. There is one panel where Magneto is launching a burst of power towards Briar, but somehow it never courses through her body; it only dances around her as she goes crashing into a number of computer and television screens. There is another panel with a close-up of Magneto’s profile that is completely out of proportion. His head looks enormous and almost stretched wide. Some of Polaris’ facial reactions were forced and almost appeared fake. There is one where she is losing consciousness and it’s more humorous than serious. Another rough spot is Polaris and Briar’s profiles. Their hair always appears disproportionately larger than their actual head. He did excel at depicting Magneto’s fury, anger, and determination.

Colorist Paul Mounts is able to definitively distinguish between the time periods. He uses a more subdued color pallet when depicting the scenes in the past while for the present battle he uses a lot of bright colors. One odd choice was the use of a green color on Briar’s face when she came under attack by Magneto. It was a little disturbing.

[easyazon_link identifier=”B0111DRBY2″ locale=”US” tag=”bounintocomi-20″]Magneto #20[/easyazon_link] is a bit of a choppy ride leading up to Magneto’s last day. Bunn’s story opens up with a deep philosophical question only to seemingly leave it hanging and unaddressed (it is possible a major twist might come our way, but that seems unlikely). The interaction with Briar was just odd and seemed forced as if he had to reveal her motive (to me I wasn’t curious, might have even been better not to reveal it). Davidson’s artwork suffered as well, especially with proportions of profile shots. He did excel at displaying Magneto’s anger and determination and the Dragon Ball Z inspired panels were fun to look at. Mounts’ coloring was spot on for the most part minus the greenish looking Briar in one panel.