The man inside the machine has finally gotten his first stand-alone title post Convergence. Cyborg reaches out to his father in order to discover a recent change in his operating system. Meanwhile, a group of technosapiens wages war against tekbreakers. Will Cyborg find himself enveloped in this distant conflict?

Writer David F. Walker begins [easyazon_link identifier=”B011BBPVAU” locale=”US” tag=”bounintocomi-20″]Cyborg #1[/easyazon_link] introducing us to the conflict between the technosapiens and tekbreakers. Unfortunately, Walker does not elaborate as to the cause of the conflict. The opening does create a large meta-story that you just know Victor Stone will eventually find himself embroiled in.

After this initial hook setting up an intriguing meta-story, Walker dials in on introducing readers to Cyborg, his father, Sarah, and the rest of the supporting cast. The largest focus is Victor Stone’s relationship with his father. However, before he really delves into the relationship and how it affects Cyborg emotionally, he provides some brief and necessary exposition detailing a few of Cyborg’s life and death adventures and his previous interactions with his father.

The relationship with his father is very strained and plays itself out with multiple characters having emotional reactions. The relationship talks to a cultural phenomenon where many kids in modern America find themselves without a father. While Cyborg’s father is physically present, he is mentally absent and treats his son more as a piece of technology than a human. When Cyborg needs his father to be a father, he isn’t there.

Walker does a fantastic job exposing Cyborg’s emotional weakness and really letting readers into the fragility of his character. Walker does this through dialogue and monologue. The monologue exposes us as readers to Cyborg’s inner thoughts and his past memories and interactions with his father, while the dialogue focuses on a potential love interest with Sarah as he confides in her his frustrations with his father. It is a double-pronged approach to delve into his character and it works wonderfully. 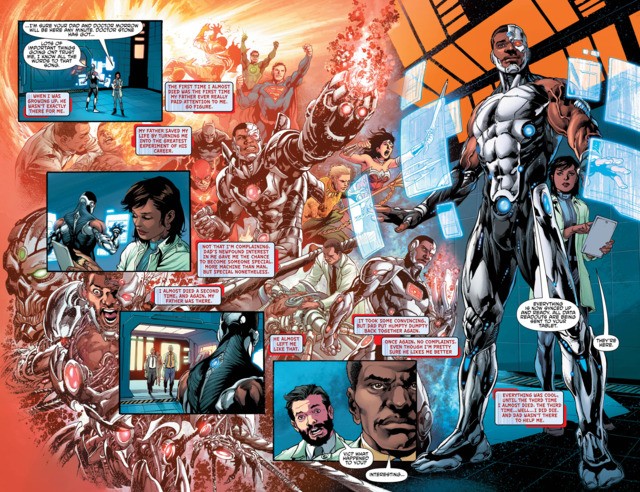 Aiding in really getting to the core of Cyborg’s character are artists Ivan Reis (penciller) and Joe Prado (inker). The emotions are on the characters’ faces. You can see the disappointment mixed with frustration as Sarah looks into Cyborg’s eyes and then in her body language as she storms out of the lab. They are also able to capture anger as Victor can’t handle feeling ignored any longer or confusion as his machine parts seem to take on a life of their own. The most emotional scenes are when Cyborg breaks down with Sarah. They pull at your heartstrings.

Reis and Prado also create exciting action sequences as the technosapiens fight the tekbreakers. However, Victor Stone’s uploaded recordings of his past battles are where the artwork is really exciting. Reis uses a full-page spread to depict a Justice League battle with Cyborg leading the way. The image is mixed with a number of other recordings including Victor being medically treated by his father and another image where his armor appears to be tearing him apart. The only drawback is the fact there is so much happening on the page it is hard to take it all in on the first read through.

There was a monster design which was a little disappointing. It looked as if Reis used a native from Camino and gave it tech armor. This monster also appears to be a potential main antagonist and it doesn’t seem intimidating at all. However, this could change based on some of the abilities this character displays.

Colorist Adriano Lucas excels with his use of light when the energy weapons are powering up and then finding their targets in massive explosions of bright colors. The way he added a filter to differentiate the recordings from the present allows for easy understanding they are actually recordings. 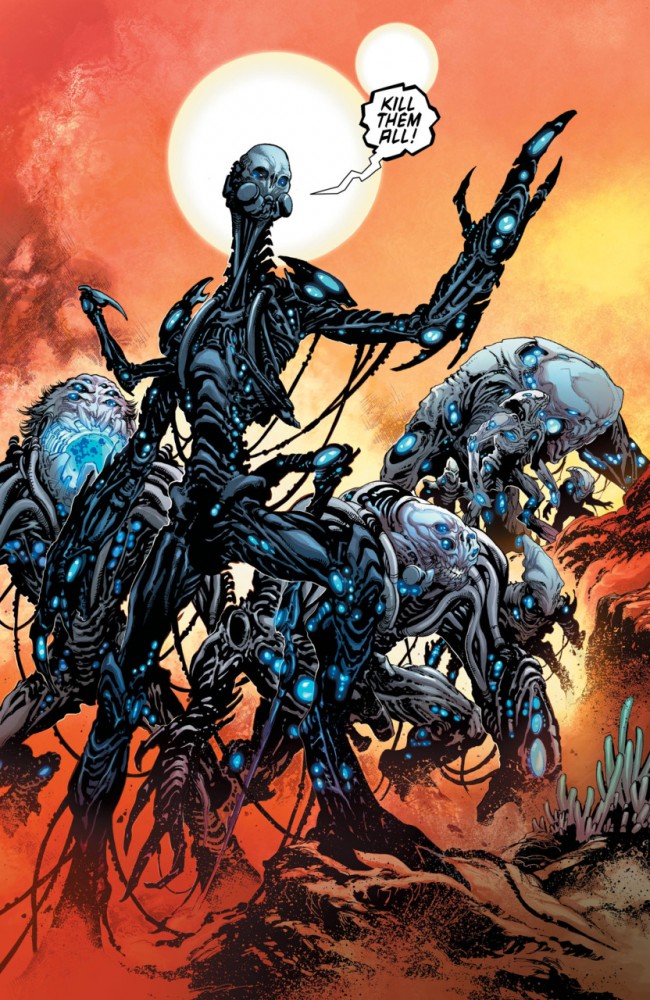 [easyazon_link identifier=”B011BBPVAU” locale=”US” tag=”bounintocomi-20″]Cyborg #1[/easyazon_link] is a great introduction to Cyborg and tells a fresh story that is really focused on his character and his relationship with his father. Walker is also able to expertly add in an overarching nemesis unbeknownst to Cyborg that dials up the tension and sets the stage for a larger more sinister plot. However, it is unclear why these antagonists are marching to war.

The artwork, minus one character design, was absolutely fantastic and gorgeous to look at. Reis and Prado really captured the characters’ emotions or lack thereof in the case of Victor’s father.

Be sure to check out Jordan Richards’ review on Adventures in Poor Taste! for a second opinion.