The Daughters of Erlik, a group of nuns, employ the Red Devil in defense of their tower full of ancient texts and scripts. The tower and the nuns themselves have come under attack from Laranda-Fa, the Empress Dowager, as she aims to wipe out any chance of commoners receiving an education and ultimately hope. Will she succeed or will Red Sonja intervene on the nuns’ behalf?

After writer Gail Simone gives a brief introduction to Sonja, she introduces her employers and the threat they face. It is a pretty standard setup with defenseless nuns needing protection from an evil monarch who hopes to quash the threat the nuns pose. Simone adds some depth to this premise by portraying the monarch as a former commoner, who now hates any memory of her former life. She sees knowledge as a threat to her rule and any threats must be extinguished.

With the knowledge of the ensuing conflict, Sonja’s character is put to the test as the reward she was promised is really a converted siege tower that now functions as a library. She must make a decision whether or not to defend the nuns based on the rightness of their cause. 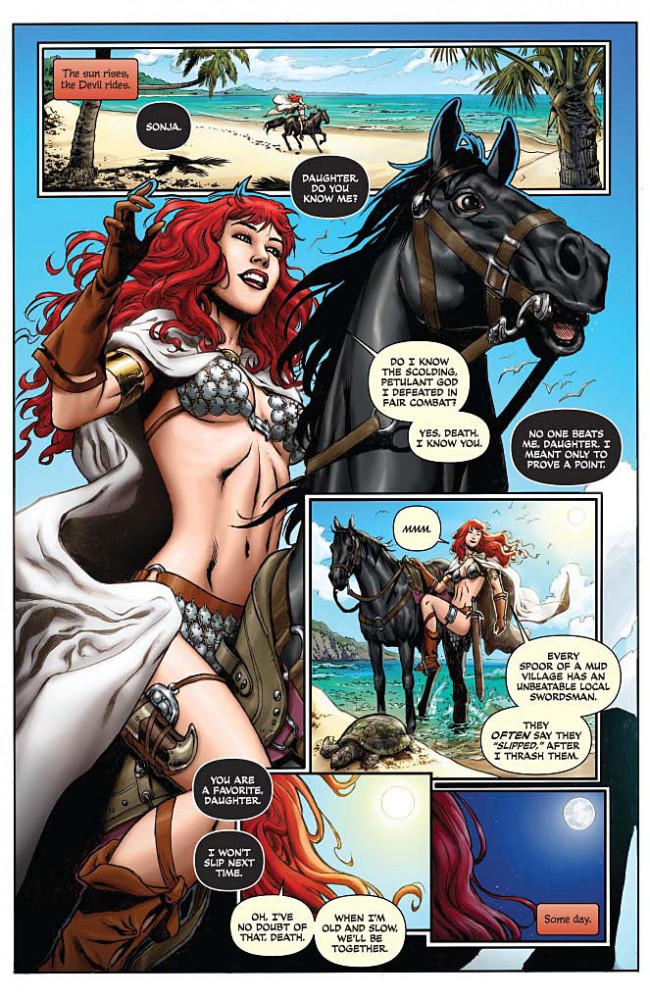 Sonja’s decision eventually leads to conflict with the Dowager’s hired men. Walter Geovani’s artwork is very enjoyable. There is a unique panel depicting the action through the reflection of one of the nun’s irises. There is also an excellent panel as we view a fleeing soldier looking down the shaft of an arrow. Geovani also mixes up the art, interweaving certain panels as shadow images.

There are only a few complaints and one of those is Simone’s dialogue. It is a little cheesy. During the intense action sequence the old nun begins pontificating, “Our library has a guard, sheriff. You damaged the books. There’s a substantial penalty.” Due to certain previous events this type of arrogant language just seems so out of place especially for the character who by all other accounts is humble and forgiving.

On the other hand, Simone’s internal monologue for Sonja is delightful to read. It is light-hearted and playful. However, towards the end it is used a little too much as exposition.

[easyazon_link identifier=”B012OJMPSE” locale=”US” tag=”bounintocomi-20″]Red Sonja #17[/easyazon_link] is a fun romp. It also looks at some deeper subjects, such as education, but only really touches them on the surface. Simone’s writing is for the most part enjoyable, although there are some missteps with the old nun. Walter Geovani’s artwork is excellent. He mixes up different types of panels and provides a number of unique camera angles to depict different sequences.