Kal’ang, an evil mage, has betrayed his king, stolen a magical seed, and raised his own army. A prophecy speaks of two people who can stop him, Red Sonja and Conan. Are they up to the task or has the mage perfected his elixir allowing his evil plans to come to pass?

Writer Victor Gischler begins the story by introducing the antagonist, Kal’ang, in his lowly position of court magician; however, he quickly makes it apparent Kal’ang has far greater ambitions than a court magician, although those ambitions remain to be seen.

Gischler’s decision to begin the story with the antagonist is a great one. It sets the stage for what our heroes have to overcome and allows us, as readers, to begin thinking on how they will do it. We are introduced to a number of Kal’ang’s powers and even a mysterious sidekick known as the Seer, who aids him in foreseeing future events. There is also quite a bit of mystery surrounding the magical item he has acquired and what he plans to do with it.

However, there are a number of problems with this introduction. There are a few grammatical errors that are really jarring and Gischler has Kal’ang go off on a monologue full of exposition in order to describe some of his skills that isn’t really necessary and something we would have found out either through the artwork or later on in the story, especially considering it is a skill he has mastery over.

The introduction of [easyazon_link identifier=”B013H2NVA8″ locale=”US” tag=”bounintocomi-20″]Red Sonja and Conan[/easyazon_link] is quite entertaining as they team up to claim command over the mercenary army defending the kingdom of Kush. The dialogue is a little lacking and it doesn’t have a very good flow, especially when the King of Kush interjects every so often his disappointment there is no bloodshed between his would-be generals or when Red Sonja begins detailing how awful the rival mercenary Captains’ fighting skills are. 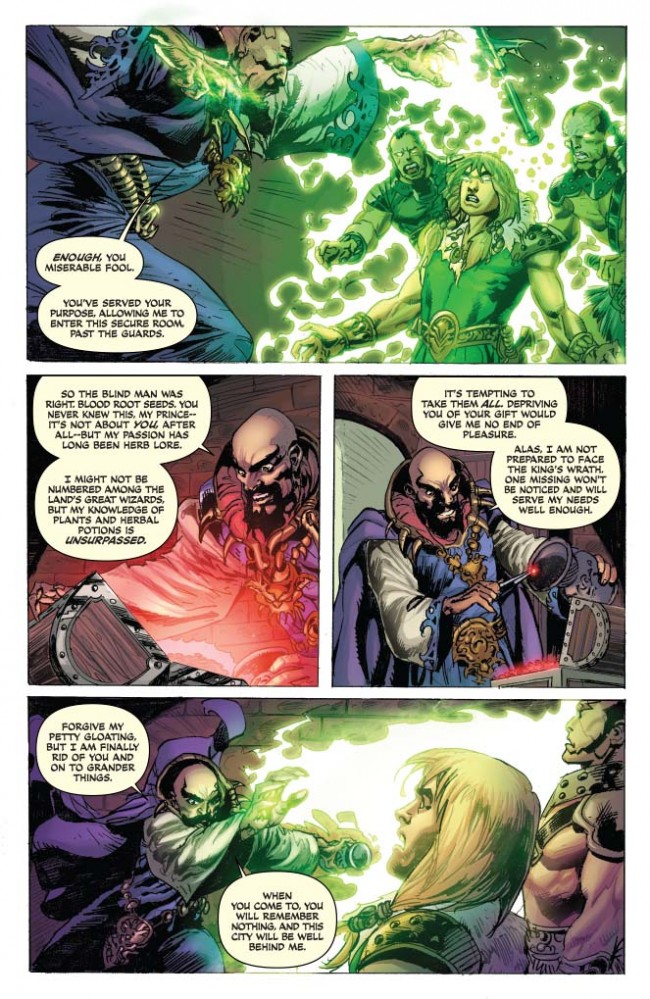 The dialogue does improve during a bar sequence between [easyazon_link identifier=”B013H2NVA8″ locale=”US” tag=”bounintocomi-20″]Red Sonja and Conan[/easyazon_link] where you can see the kind of relationship the two have as they playfully flirt with each other. However, this is once again marred with grammatical errors that are increasingly frustrating.

Roberto Castro’s artwork starts off very rough. The depiction of the young prince as he commands Kal’ang is extremely difficult to look at. His mouth is off-center, his nose looks scrunched, and his hair sits atop his head like a wig. It looks as if he rushed these panels.

After those first few panels the artwork improves, although there are still a few panels that appear to be rushed or over-inked. I really enjoyed how he uses shadows on the characters’ skin to accentuate their sinewy muscles. The combat sequences flow very well together and he does a good job with the panel layout, allowing for ease of reading. His panel layouts are so diverse, I don’t think there is one page that has the same layout.

Colorist Alex Guimaráes makes excellent use of lighting in the bar scene where he puts the reader’s attention on Conan and Sonja despite another table of mercenaries occupying the foreground. You hardly notice them and zero in on Conan and Sonja. 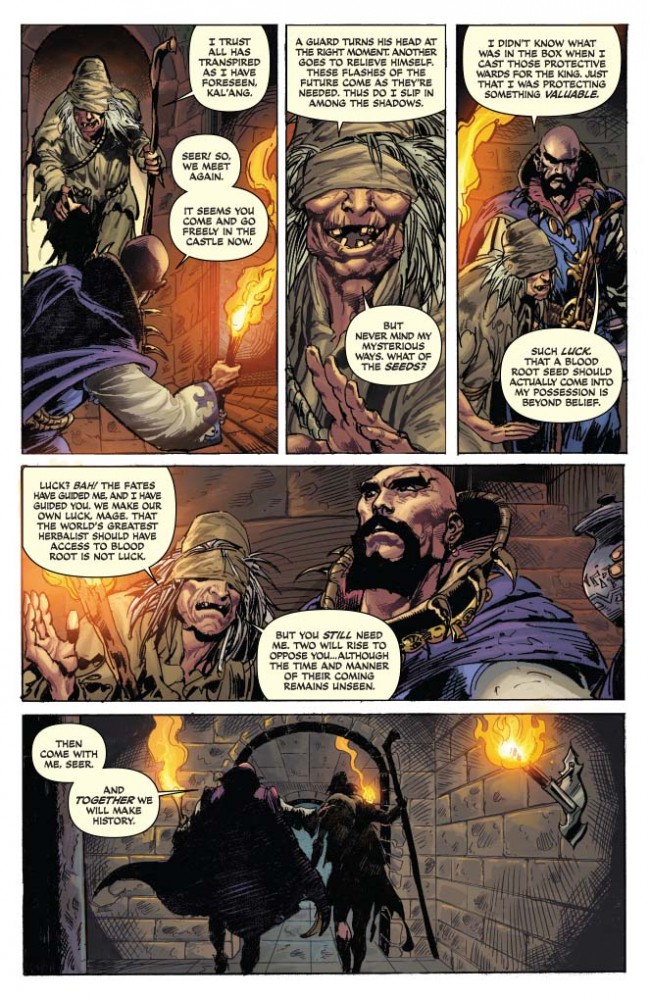 Guimaráes also makes use of a combination of yellows, oranges, and reds in the background of many of the combat panels to show the passion, fury, and struggle of the characters. One fascinating choice is the color of blood; it is a much more muted almost maroon color compared to Sonja’s hair. It will be interesting to see if this becomes a trend where Sonja’s hair will be the brightest red on the panel.

[easyazon_link identifier=”B013H2NVA8″ locale=”US” tag=”bounintocomi-20″]Red Sonja / Conan #1[/easyazon_link] is an enjoyable adventure into the Hyborian Age. Kal’ang is an intriguing antagonist, albeit he could use a little more fleshing out which should come in subsequent issues. The chemistry between Red Sonja and Conan is really fun to read especially when they move from the bed to combat; it is seamless. There were some rough patches in the beginning of the book with both the dialogue and the artwork, but by the end Gischler minimizes the grammatical errors and lengthy exposition disguised as a monologue while Castro seems to take his time and not over-ink the characters.