Lando and his crew of thieves were able to easily commandeer the Empire corvette, Imperialis. However, getting away with their thievery is a whole other matter. Will Lando be able to outmaneuver three Imperial Star Destroyers and what exactly is so valuable being stored within the ship?

After a very exciting debut issue, Charles Soule and Alex Maleev jump us right into the action in this [easyazon_link identifier=”B011SXEOJU” locale=”US” tag=”bounintocomi-20″]second issue[/easyazon_link]. The Empire sends three Imperial Star Destroyers to apprehend Lando and his crew. The arrival of the three Star Destroyers is an illuminating moment, really exposing just how differently Lando thinks. Many people would begin to despair, believing their fortune has been undone. Not Lando, he sees this as a sign of just how much the ship and its cargo must be worth.

The space battle is quite intriguing and Soule does an excellent job of putting in very believable constraints that test Lando’s wit as well as his piloting ability. Opposite Lando, Soule explores the nature of failure and punishment within the Imperial military through Commodore Idel. The Commodore prioritizes punishment over capturing Lando. It really displays the evil at the heart of the Empire and the final moments of the Commodore almost have you feeling sorry for him despite his initial actions.

The space battle also tests Lando’s crew and it is an interesting moment where they really come together. Unfortunately, Aleksin, Pavol, and Sava Korin Pers are still regulated to supporting cast, but the few moments they do appear are memorable; just wish we got a little more of them. 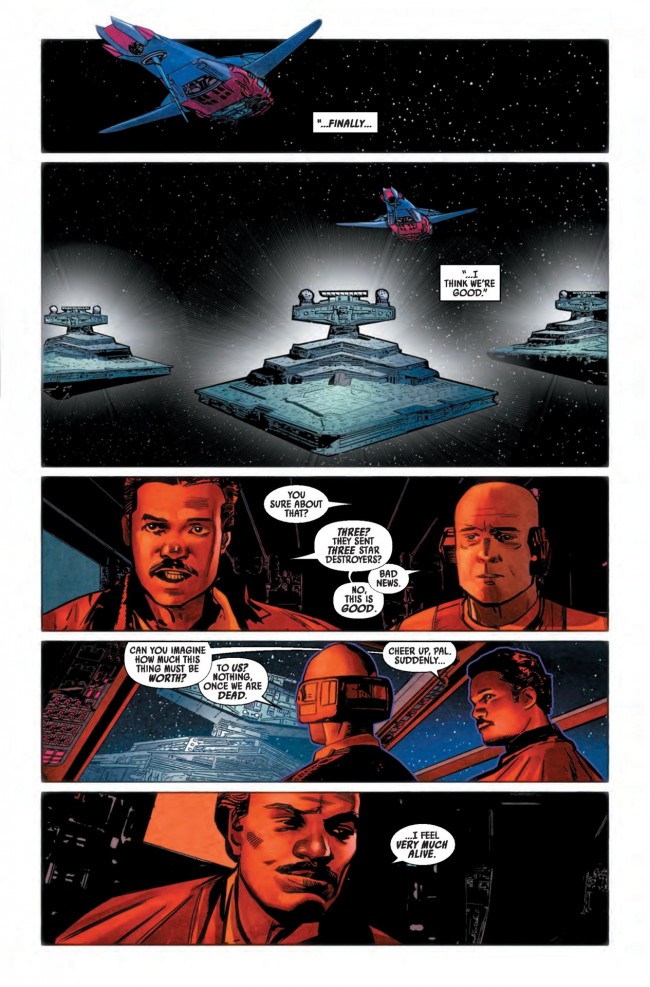 Halfway through, Soule transitions away from Lando and the space battle to a completely different location on the planet Amethia Prime. He introduces a new character, Chanath Cha, a ruthless bounty hunter. This guy might be worse than Boba Fett. The character is introduced in the middle of a bounty and the actions he takes definitely speak louder than words. He looks to be a formidable opponent for Lando.

Soule wraps up this issue in great form, hinting at the vastness of the Star Wars universe, as Lando discusses the unique weapons systems of the ship most likely designed by the leader in the field, Raith Sienar. The conversation, though intriguing, puts you in a comfortable spot ripe to be shocked for the cliffhanger ending.

Alex Maleev’s artwork is once again fantastic. He captures Lando’s expressions flawlessly and there is even one panel where you can imagine Chewie grabbing hold of him instead of a knife at his throat. This issue really stands out for the different settings and Maleev masterfully weaves tight cockpit scenes next to massive Star Destroyers hunting the Imperialis. He then captures the haunting beauty of Amethia Prime as Chanath Cha wreaks destruction. Although there was one scene where you have to suspend your disbelief or imagine bigger where Chanath Cha somehow goes from high in the sky to deep underwater without any indication of how.

Paul Mounts’ colors were a little on the dark side for me. While on board the Imperialis, Lando is almost orange; it’s as if there is no interior lighting on the ship or, if there is any, a couple of the lights haven’t had their bulbs replaced. However, the use of this orange/red color was put to good use on Amethia Prime where it appears Chanath Cha’s action made the sky run with blood.

[easyazon_link identifier=”B011SXEOJU” locale=”US” tag=”bounintocomi-20″]Lando #2[/easyazon_link] is the best Star Wars comic Marvel is putting out right now. It is fun, action-packed, and intriguing. The characterization is excellent whether it is through dialogue, action, or body language. Maleev’s artwork is top-notch and despite the use of the orange color inside the Imperialis, Mounts’ colors were generally good. If you aren’t reading this book, you need to. It is that good!