[easyazon_link identifier=”B00FMNNIZE” locale=”US” tag=”bounintocomi-20″]Man vs Rock Volume 1[/easyazon_link] explores the ancient struggle between man and rock through the course of history up to the present day. Will man be prepared for the day when rock rises up to claim vengeance for millennia of abuse?

An ancient war between man and rock? You are thinking this has to be the most absurd, inane, and stupid idea since sliced bread. You’d be wrong; this book is downright awesome.

What makes it so? It’s ability to make you laugh. Not many books this day are capable of doing it for the entire time you are reading. Victor DeTroy, Kevin Bieber, and Jared Lamp had me laughing with every single flip of the page.

They take no prisoners with their comedy, making fun of everyone and everything. There are no sacred cows. They go after the Jews in ancient Egypt with jokes about firstborns to Christians with the crucifixion of Jesus and even depicting U.S. soldiers waterboarding the filthy rocks!

If you were thinking everything is a lot of one-liners, you would be wrong. DeTroy and Bieber build-up the tension as each new scenario throughout history depicts the utter humiliation and debasement of the rocks, leading one to only conclude they must be out for revenge some time.

About halfway through the issue, DeTroy and Bieber transition from detailing the history of the subjugation of rock by man to what appears to be the main protagonist and his supporting cast. Buck Stone, a professor at the Robert E. Lee University of Northern Aggression in New York City, is downright hilarious. DeTroy and Bieber do an excellent job of taking stereotypes and absolutely exaggerating them. The stereotypes make it extremely easy to understand who these characters are and what their motivations may be. 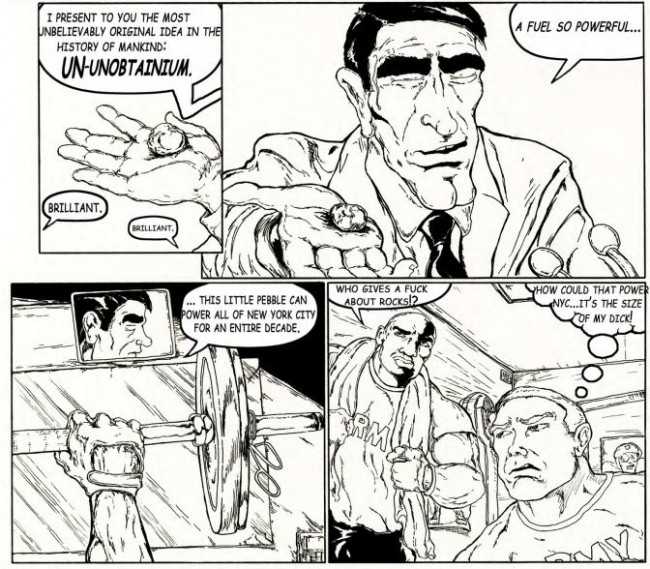 Jared Lamp’s artwork really helps sell DeTroy and Bieber’s humor and even creates some on its own. A hardcore soldier intently focused on interrogating a rock and then, upon not getting any answer, he begins slowly dumping a bucket of water down the rock’s throat! The detail is in the use of the soldier’s hand making a pinching motion mimicking forcing someone’s mouth open. He also heavily uses shadows in this scene to create an intense atmosphere. If the soldiers were interrogating an actual human, it would be extremely shocking, but since it is a rock it’s just downright funny.

There are some issues with artwork, mainly due to the nature of it being in black and white. In the opening scene it is quite difficult to tell what is happening until you flip the page. The other humanoid’s chest and arm is unclear and upon first inspection looks like it could be part of the landscape.

The lettering in this book is pretty good. It captures the emotions of the characters and helps to exaggerate their characterization. For example, going back to the waterboarding scene, the army soldier screams at the rock, “Tell me where OSAMA is!” It sets the tone of the scene and complements the imagery of the soldier screaming. Although there are some scenes which do not use any bolding, italics, or change in font, they could have been used it to emphasize the ridiculousness of some of the dialogue.

[easyazon_link identifier=”B00FMNNIZE” locale=”US” tag=”bounintocomi-20″]Man vs Rock Volume 1[/easyazon_link] is one of the funniest books I have read. I was laughing so hard reading through the first time and was still laughing the second and third times! It isn’t for people who will be easily offended as DeTroy and Bieber take down a number of sacred cows from Jesus to Moses to political advocacy. Everything is on the table. The actual story builds nicely, detailing the impending conflict and the causes of it. It then transitions and builds up one of the most insanely funny characters ever in Buck Stone. If you are looking for a whole lot of laughs and aren’t worried about being offended, go buy this book. It will be worth it.

If you couldn’t tell this book is definitely for mature audiences.