[easyazon_link identifier=”1606906917″ locale=”US” tag=”bounintocomi-20″]Army of Darkness: Ash in Space[/easyazon_link] is a fun Evil Dead adventure with a sci-fi twist. For the most part Cullen Bunn captures the essence of the franchise. Larry Watts’ art isn’t spectacular, but it gets the story across (the most noticeable flaw is Ash’s face). It seems a little sterilized, but maybe that’s because it takes place on a sanitized, vacuum-sealed spaceship. 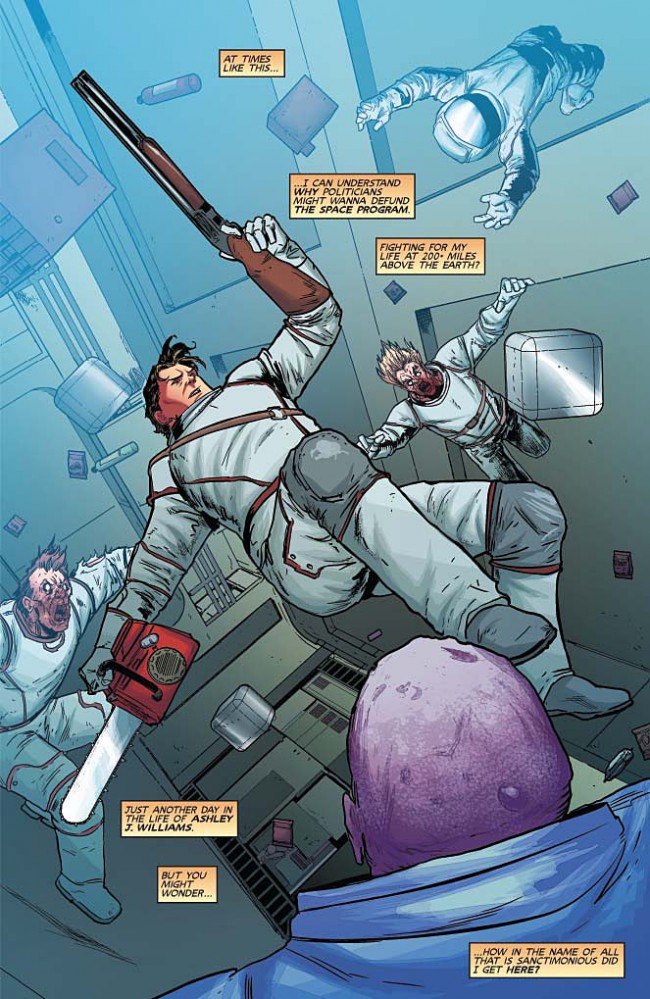 The story gets off to a rough start. If I had read the first issue on its own, I probably wouldn’t have picked up the second issue. You’ll have to get through half of the book before things get good, but once it gets going it makes up for lost time.

That’s when the premise is finally revealed. The Necronomicon has been uploaded onto a spaceship and will be transmitted throughout the universe on an evil satellite if Ash and three female astronauts don’t stop it.

In addition to the great premise, [easyazon_link identifier=”1606906917″ locale=”US” tag=”bounintocomi-20″]Ash in Space[/easyazon_link] throws in some funny sci-fi twists to events from the movie. Ash- his missing hand replaced with a Luke Skywalker robot hand- finds himself reliving the events of Dead by Dawn when his mechanical hand is possessed and attacks him. Later, Evil Ash from the Army of Darkness movie takes robot form and fights Ash (who’s wearing a robotic exoskeleton).

Overall, it’s a cool take on the franchise. You can skip the first third of the book without missing anything. Once it gets going, it’s a fun read.