The discovery of a second player in the time traveling game has Colton rattled, especially after finding out his entire personal life has been destroyed. He seemingly begins making rash decisions in order to track down this new player and get answers about who he is and why he is doing what he is doing. Will Colton’s personal vendetta get in the way of putting a stop to this new player? What other surprises could there be when time travel is involved?

[easyazon_link identifier=”B013TR3G9W” locale=”US” tag=”bounintocomi-20″]Transference #2[/easyazon_link] jumps you right into the middle of a conversation between Colton and what appears to be his mentor. It is rather jarring and a little bit confusing. However, it really plays up the sense of confusion that Colton is experiencing. After the initial confusion, Moreci is able to explore Colton’s character through this relationship while also reminding readers the time line has changed.

Moreci expands on the science fiction, giving a brief explanation of how the current technology works, but he also adds in an even deeper, more complex layer. It is unclear how deep into the philosophical realm Moreci will go exploring this complex layer, but in this issue he just introduces us to the concept.

This issue is not without suspense and excitement. There is a scene where Colton and his team track the other time user to a crowded New York City park. Moreci uses a little too much exposition at the beginning of the scene instead of letting the artwork set the scene; however, the rest of the dialogue is quite entertaining and a little bit unnerving concerning the topic. 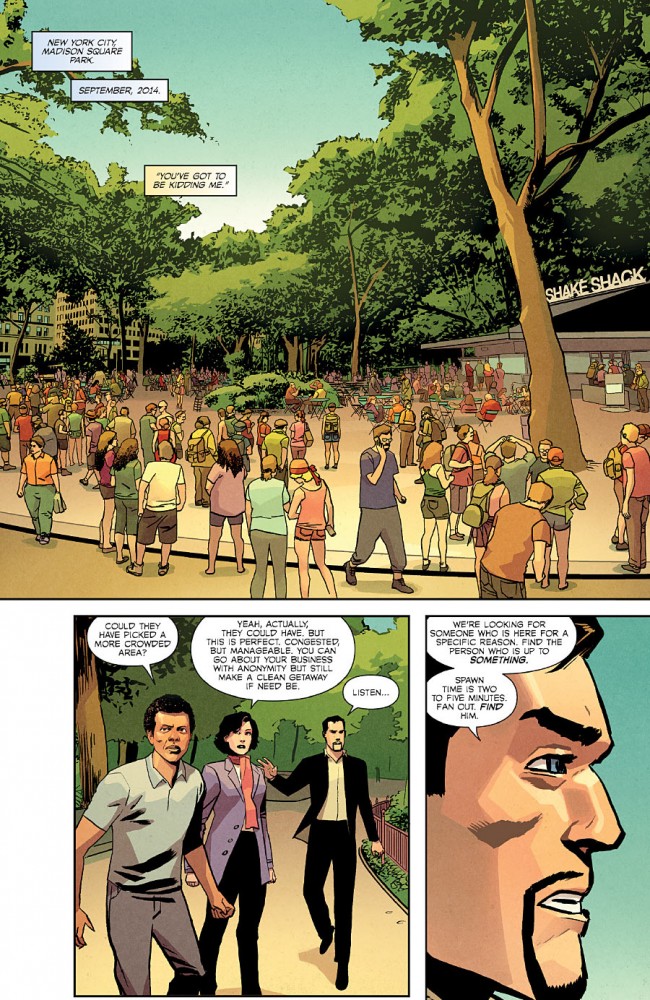 Moreci saves the best dialogue for last. After an interesting and heated conversation with Jordan, Colton runs afoot of another new or maybe old player to the time traveling game. The dialogue between the two is short and to the point, but conveys a ton of emotion and hits the reader with a huge surprise at the end.

Ron Salas continues on art duty. I am not the biggest fan of his art style as it lacks nuanced details. Many of the backgrounds are basic rectangles, whether its city buildings or desks. The only scene where the background is lively is in the city park and the characters all blend. That’s not necessarily a bad thing, but nothing flashy or unique stands out on any of the characters.

The first action panels are done very well. Salas captures Colton’s emotion and the pompous nature of their captive. He did a great job of conveying the victim’s time travel ability.

The last sequence involved a chase and was quite difficult to follow. It appeared Colton was being chased by a stranger, but upon arriving at a building full of mannequins it is Colton who is out in the open being hunted. I would assume the person arriving first to the building would be the one lying in wait.

Tamra Bonvillain still could improve on her choice of colors for backgrounds during action scenes. She uses a light calming blue during one scene where Colton twists a mark’s hand in order to disarm him. It just doesn’t match the tone of Salas’ artwork. However, in other heated scenes with Colton, she is able to capture the red of the setting sun to display his ferocity. 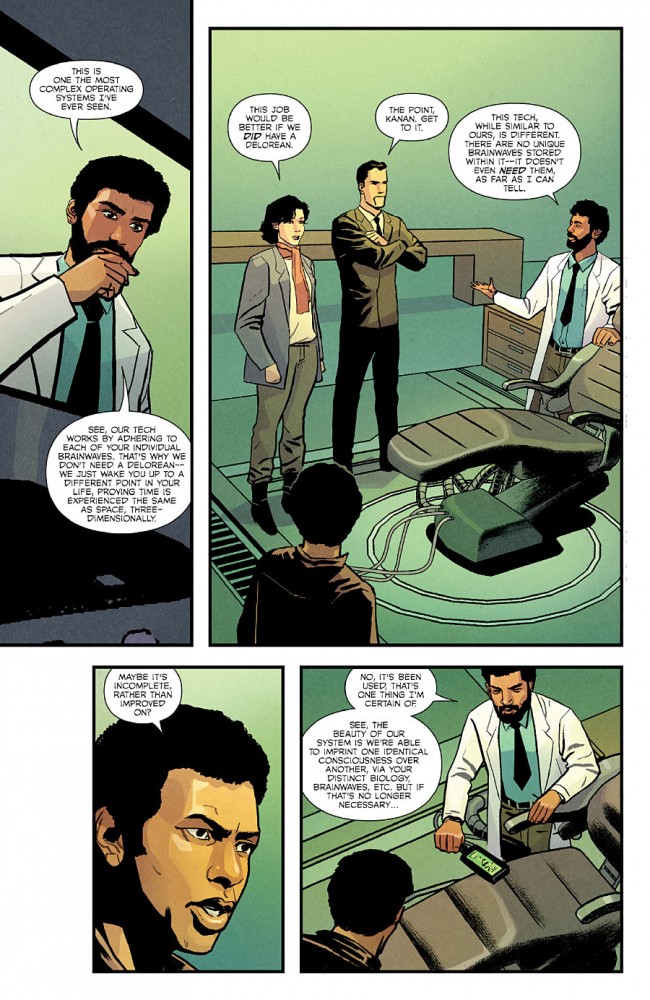 [easyazon_link identifier=”B013TR3G9W” locale=”US” tag=”bounintocomi-20″]Transference #2[/easyazon_link] in typical Moreci fashion provides answers to a few questions, but has you asking even bigger ones at the end of the issue. The beginning of the book was a bit difficult to jump into, and will be extremely difficult for new readers; however, he quickly turns the moment into a strong character development scene. Salas’ artwork lacks detail and can be quite confusing during the end of the issue, but it serves the comic’s sci-fi genre well.