Unity and its leaders have assessed the situation and determined Tama is guilty of slaughtering hundreds of people. Their evidence: the slaughters follow in her wake from Alabama to Wyoming. Never mind the fact the Earth was attacking the Eternal Warrior at the end of the first issue.

Despite this missed observation by the Unity team, the standoff between the Eternal Warrior and Unity builds up the tension for an exciting combat sequence where the Eternal Warrior channels his inner Batman, having prepared for the fight and executing the plan to perfection. It works out a little too perfectly for my taste. There are also parts of the battle that will not be friendly to new readers. However, Venditti uses the battle to examine the relationship between the Eternal Warrior and Aric and describes how allegiances can shift based on circumstances. It is a very interesting lesson and Venditti hammers it home.

Following the battle, Venditti examines the knowledge problem, or the fact that no matter what the evidence may be telling you, there is always a possibility, however remote, that the truth may be something else entirely. It is a great exploration of Neville Alcott and Colonel Jamie Capshaw’s characters and their different approaches to the situation. 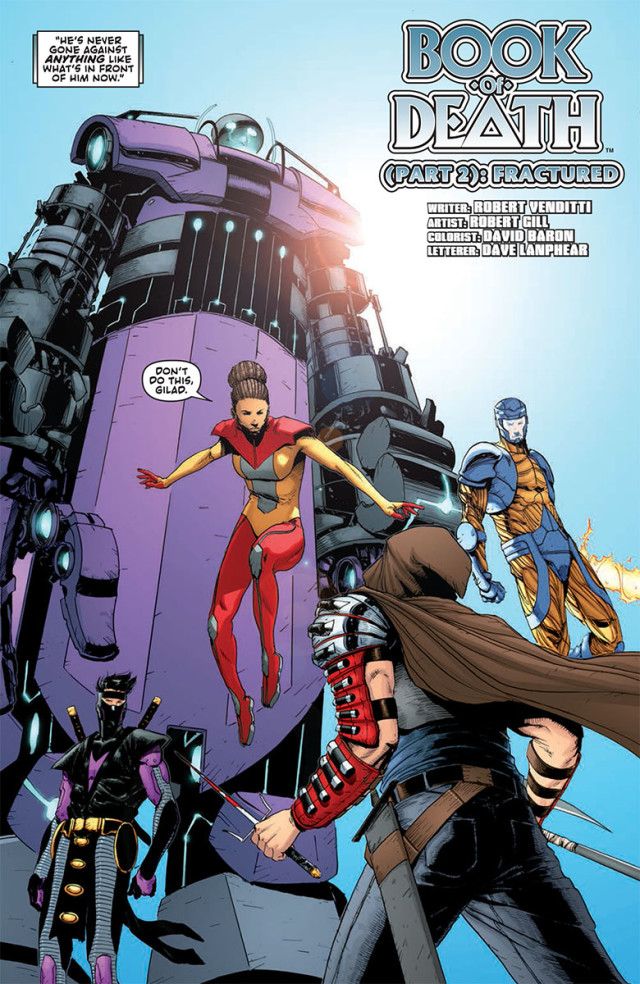 The second half of the book continues with a reading from the Book of the Geomancer. This telling dives into what drives the Eternal Warrior, who he is, and his indomitable will to continue to fight no matter the setbacks he faces. This part is told so well, combining Venditti’s monologue with Robert Gill and Doug Braithwaite’s artwork. It’s almost simplistic, but its simplicity is extremely powerful.

Finally, the book finishes with the reveal of the true threat to Tama and the Eternal Warrior, a character out of Valiant’s past that will prove a formidable foe.

Robert Gill and Doug Braithwaite’s artwork is solid. There are quite a few standout panels. One shows Ninjak at the mercy of the Eternal Warrior and his face is utterly resigned in defeat, while another depicts the sheer agony X-O Manowar is experiencing as Ninjak’s sword is thrust into his shoulder. The way they are able to almost create motion in a still image is amazing. It really looks as if X-O Manowar’s entire body is vibrating.

The scenes when Tama is reading from the Book of the Geomancer are extraordinary to look at. They depict a number of historical scenes from the sacking of Athens to the Wild West and into the future as he combats the new, evil Geomancer. 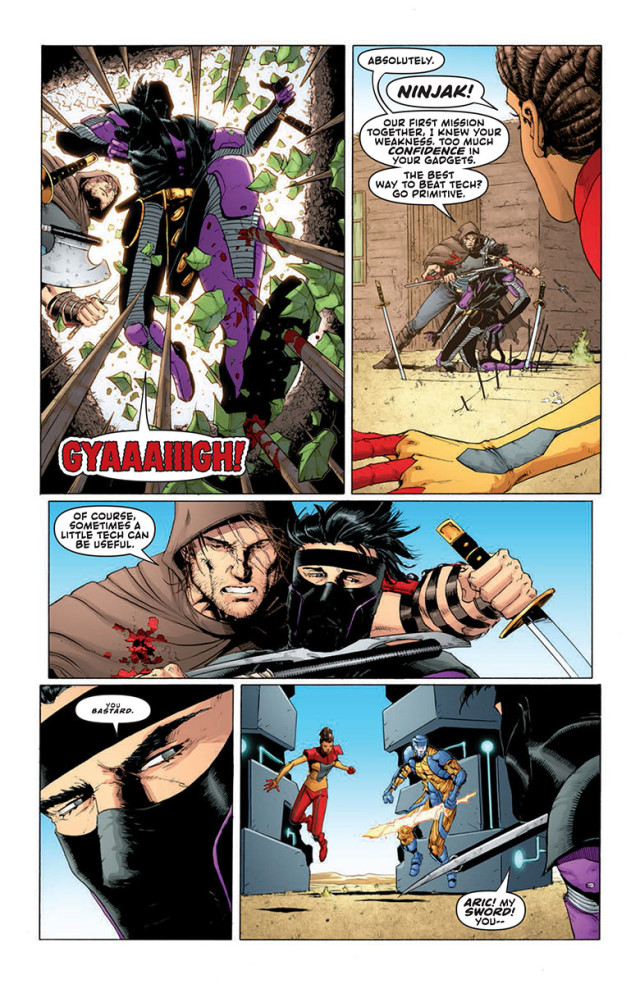 There is one panel that does look rather odd where the Eternal Warrior is attempting to crane his neck to look up and out of a windshield. Unfortunately, it comes off appearing as if his head is jutting out of his body at an unnatural angle, as his shoulders don’t move with his head.

[easyazon_link identifier=”B013CH20F0″ locale=”US” tag=”bounintocomi-20″]Book of Death #2[/easyazon_link] highlights the Eternal Warrior’s mission in both his stance in combating Unity as well as the story read from the Book of the Geomancer. The characterization is excellent from the Eternal Warrior to Neville Alcott to the villain. Almost all of the characters have moments where depth is added to them. However, the Eternal Warrior’s perfect plan coming to fruition was a little over the top. This book continues the excellent stories Valiant is putting out.