Batman has ascended to godhood upon claiming the Mobius Chair while Darkseid’s forces are drawn to Earth to combat his daughter Grail and the Anti-Monitor’s forces. Will the Justice League be able to stop the impending war? How does it fare?

[easyazon_link identifier=”B013TQGOMO” locale=”US” tag=”bounintocomi-20″]Justice League #43[/easyazon_link] is a jam-packed issue with so many different story lines, it can almost be overwhelming at times. Batman’s ascension to godhood affords him and the rest of the Justice League, minus Superman, the power to determine what exactly is happening. It is necessary as a plot device, but it isn’t anything we as readers haven’t don’t already know. You can almost skip through many of these pages and not really miss out on anything.

Geoff Johns also touches on a number of minor characters, including the introduction of Kalibak in the opening pages and Darkseid’s assassins, Kanto and Lashina. Their role in this issue is so tiny it is questionable why they were included in the first place. The page with the assassins doesn’t add anything to the assassins’ characters that we don’t already know. Kalibak’s introduction lets us as readers see him in the flesh, but his self-serving nature was already explained in the previous issue.

There are some bright spots in this issue. Superman and Lex Luthor’s time on Apokolips is especially interesting as the two are forced to work together to combat hordes of Darkseid’s slaves. Johns writes my favorite line of the issue during Lex and Superman’s alliance, “You’ll never be human.” Unfortunately, the promise of breaking ,or at least testing, Superman’s moral code isn’t fulfilled in this issue, but there is definite hope that this will be explored in subsequent issues. 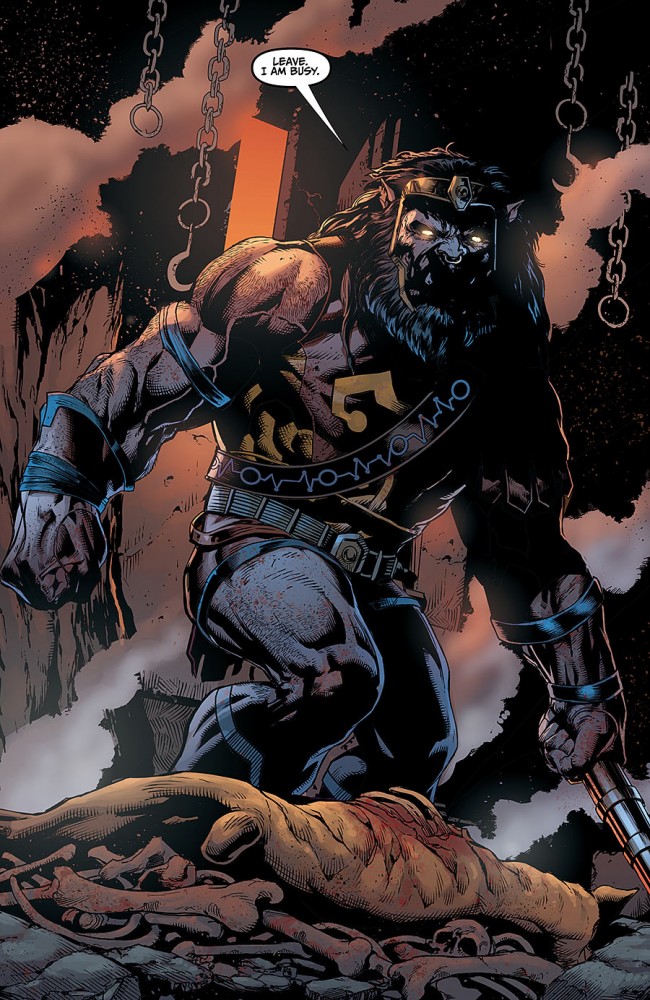 After a so-so first two-thirds of the book, aside from Superman and Lex, Johns really turns up the storytelling, using an internal monologue of Wonder Woman describing the choices she will have to make and the potential outcomes of those choices.

Jason Fabok’s artwork is once again stellar. He is able to completely transform Batman into a god through his body language with hands folded in front of him and haughty looks at the rest of the Justice League. He does an excellent job with panel selection. During Lex and Superman’s stroll through Apokolips, he sets up a pretty big revelation in excellent fashion, using Luthor’s expression on the previous page to channel the reader’s expression on what they will see as you flip the page.

Fabok does an excellent job of contrasting the characters as well. With all three teams (the Justice League, Anti-Monitor, and Darkseid) engaging on Earth he uses separate panel close-ups to display each character. It builds a ton of tension as war commences.

Brad Anderson’s colors bring Fabok’s art to life. The shadows and lighting used in introducing Kalibak play to Johns’ characterization. He uses a ton of reds, oranges, and yellows to show the ferocity and danger of the impending war or to emphasize certain characters such as Darkseid when he comes through a boom tube. 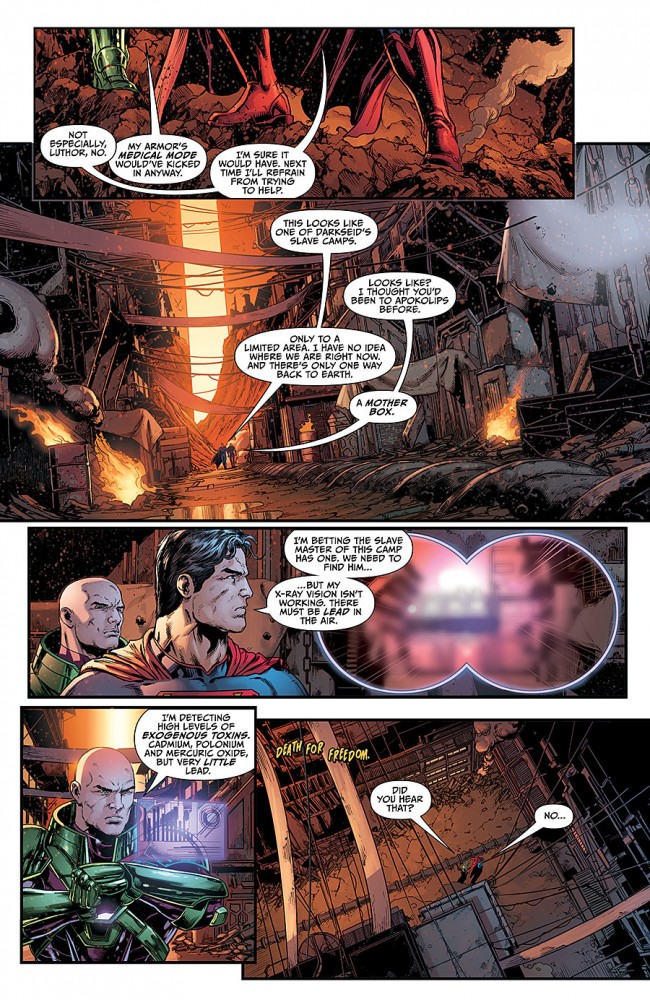 [easyazon_link identifier=”B013TQGOMO” locale=”US” tag=”bounintocomi-20″]Justice League #43[/easyazon_link] falls victim to the audience knowing more about what is happening than the characters. Johns has to spend a number of pages describing who certain characters are and what their play is. This leads to an almost skippable first two-thirds of the book. Despite these shortcomings, there are some bright spots, mainly Superman and Lex. In addition, the final third of the book really builds the tension and sets the war in motion. Fabok’s artwork is absolutely fabulous from body language, to sequential panel layouts, to the action scenes.