After an absolutely dismal issue seven, Star Wars returns to the adventures of Luke, Han, and Leia. Han and Leia attempt to avoid Imperial detection while Luke continues his search for knowledge of the Jedi. How does it fare?

The first thing you notice when you open this book is Stuart Immonen’s absolutely stunning depiction of an Imperial Star Destroyer. My first reaction was “Now this is Star Wars!”

My initial reaction rings true for the majority of this issue, especially the interaction between Leia, Han, and Sana. Jason Aaron opened up a massive can of questions after dropping the line in Star Wars #6, “The name is Sana Solo. I’m his wife.” Aaron doesn’t answer all of the questions or really any for that matter, but it is a great opportunity to see Han at his best using his gift of gab in an attempt to turn a horrible situation to his advantage.

Aaron also explores Sana Solo’s personality. She appears to be extremely possessive and is willing to take drastic measures in order to obtain the things she wants to possess. It really creates a ton of tension and intrigue; you find yourself sitting on the edge of your seat wanting to find out how this crazy triangle is going to play out.

After building the tension, Aaron transitions to Luke and his quest to discover more about the Jedi. This is where I think Aaron gets a little off track. It is almost a flashback to A New Hope’s Mos Eisley scene, except Luke didn’t learn from Obi-Wan Kenobi. It is really quite frustrating how Aaron depicts Luke approaching the scene. He has some experience now and he would not approach the situation like this. It’s like he didn’t learn anything about how to secure transport when Obi-Wan negotiated with Han. 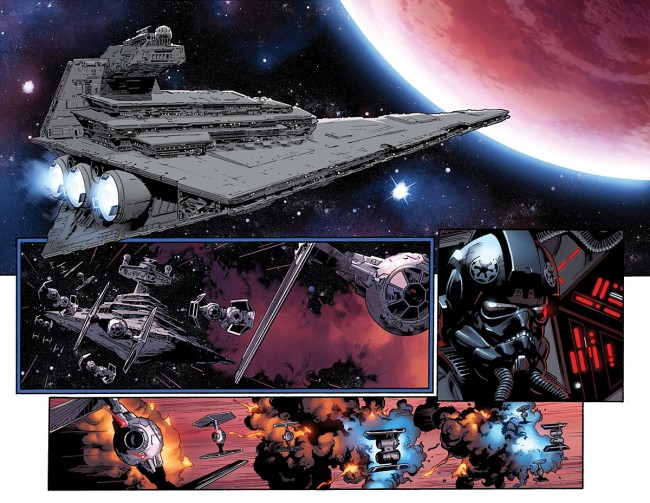 After the scene with Luke, Aaron transitions back to Leia, Han, and Sana. He absolutely kills it with the dialogue and the actions the characters take. It is quite hilarious to see Han stuck in the middle of these two strong women, attempting to diffuse the situation.

Stuart Immonen’s artwork is absolutely fantastic from his glorious space images to his excellent facial expressions. There is one panel where he depicts an eye roll from Leia that is spot on. The way he depicts space as almost cloudy is also very neat; some of the images look like they could have come from a NASA satellite. He is also able to use his imagination with his depictions of a number of different alien species from a Rodian to a Wookie to some kind of buck-toothed, pig-snouted rodent.

The only major problem is the action sequence with Luke. At one point his lightsaber is stolen right out of his hands. It is incredibly difficult to tell how it was stolen, whether through the Force or by some kind of technology.

If there was any doubt as to who the artist should be to do Star Wars, Stuart Immonen is making an extremely strong case to stay on long term. 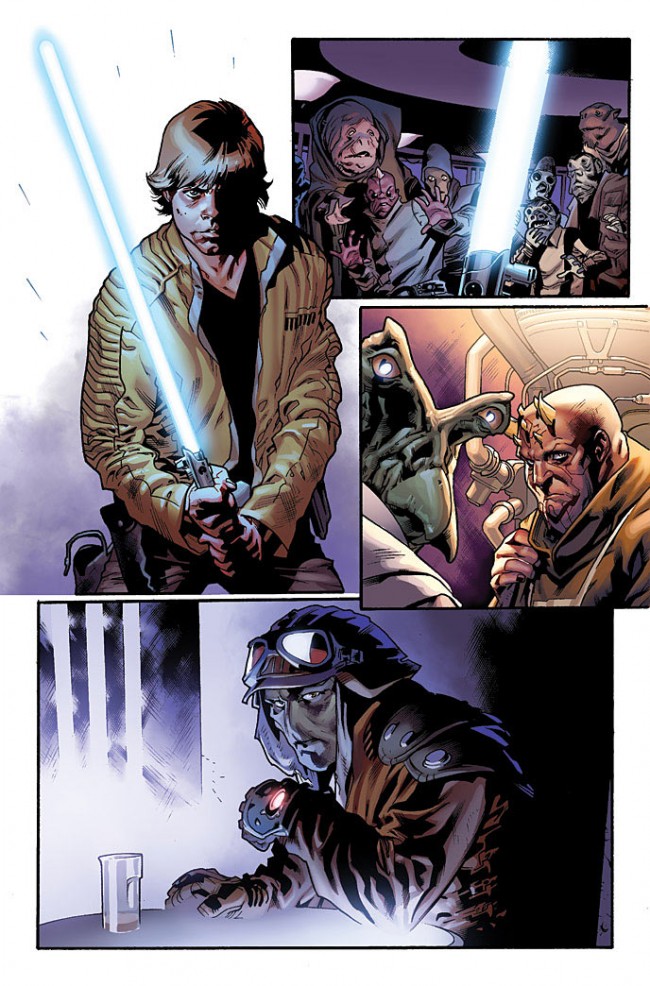 Justin Ponsor’s colors highlight Immonen’s pencils. He draws out the space clouds, providing contrast with the rest of space. His use of lighting is excellent, especially on the opening page where half of the Star Destroyer is in shadow; it really creates an ominous imposing vibe. You can hear the Imperial March playing in your head. His use of lighting is further emphasized in the Nar Shadaa bar scene as he uses Luke’s lightsaber to draw out Immonen’s character expressions.

[easyazon_link identifier=”B010PPBFB2″ locale=”US” tag=”bounintocomi-20″]Star Wars #8[/easyazon_link] is a welcoming experience after the let down of the previous issue. The story between Han, Leia, and Sana is brilliantly crafted and paced, building on all of the characters as they each work to turn the situation in their favor. However, Luke’s storyline wasn’t very believable given his previous experience. Stuart Immonen’s artwork was phenomenal. I can’t express how good it was. You should pick up this book for the art alone. I would love some posters of those first two panels!