[easyazon_link identifier=”1631403850″ locale=”US” tag=”bounintocomi-20″]Mutanimals[/easyazon_link] is exactly what you’re looking for if you need to take a break from the superhero routine. While this is a book about a team banding together and fighting the good fight, these may be characters that you are unfamiliar with. Myself, this is the first time in maybe ten years or more that I have even touched a TMNT title of any sort. I was a blank slate reading this. How does it fare?

Paul Allor did such an amazing job with the characters. Each one filled an archetype for better or worse, but even after the first issue, I had a sense of who each character was. They each brought something unique to the table. They argued and laughed, triumphed and failed together, but they each did it in their own unique ways.

This is the perfect book for someone who may want to venture into the larger TMNT world, but doesn’t know where to start. I flew through it one sitting, only stopping to have a slice of pizza, (it just felt right reading a turtle book with pizza in hand) but other than that I couldn’t put it down. The art jumps off the page with a raw intensity that makes the action scenes punch you in the face. Andy Kuhn’s art fit this book so well I couldn’t imagine anyone else doing it. A lot of artists today can be confused for one another, especially within the superhero side of comics, but the art was done in such a unique fashion that it can’t go unnoticed.

While this is a simple story of the good guys vs. the bad guys, it also weaves together a story of morality and ethics. There’s an adage that goes something like “just because you can do something, does it mean you should?” The book takes a stance on doing the right thing, after all it is a story about triumphing over evil, but it gives the “bad guys” a voice. They try to justify their actions and claim the heroes are “terrorists”. If you’ve been reading comics most of your life you can guess what happens in a very broad general sense, but in books that are mostly targeted at a younger audience, it does a really good job at giving everyone their chance to say they are right and the other is wrong. 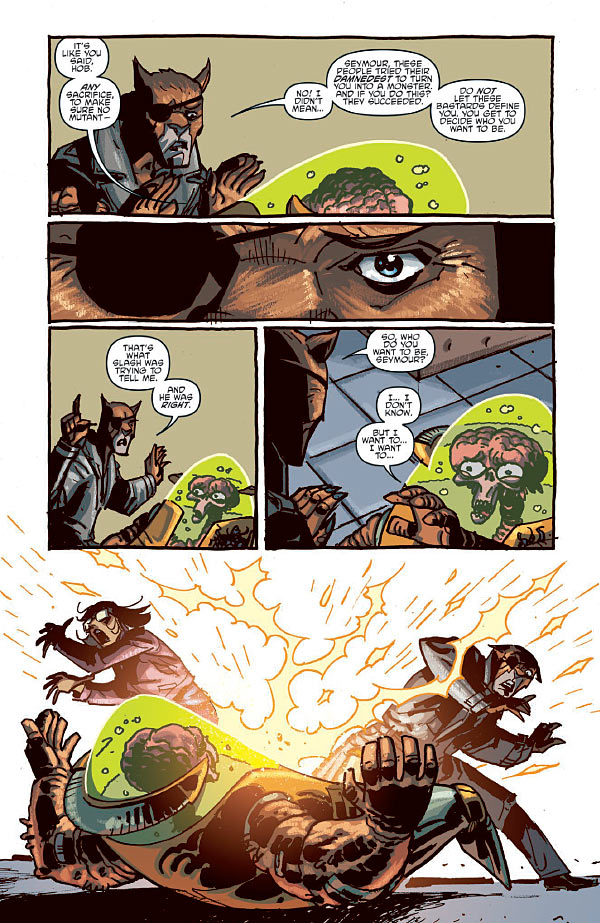 I fell in love with [easyazon_link identifier=”1631403850″ locale=”US” tag=”bounintocomi-20″]Mutanimals[/easyazon_link] for so many reasons because the creative team of Allor and Kuhn just work. They have an understanding of each other and it shines through in every panel. Every emotion on a character’s face that Kuhn illustrates is the perfect match for the script Allor wrote. It’s a perfect match for an outstanding book.