A brash pirate named Bones finds himself embroiled in a conspiracy in order to win his freedom and be exonerated from his crimes. Will he involve himself or find a way to thwart the conspirators? How does it fare?

Gears and Bones #1 starts off introducing you to a large sweeping world filled with gods and dragons who care little for the ways of mortals. After teasing this sweeping world in both the script and the art, it quickly narrows its focus on the main protagonist, Bones.

Writers William Thomas and Andrew Anderson introduce us to Bones right in the middle of an exciting combat sequence. During this combat sequence Thomas and Anderson hint at Bones’ past, but they never dive too deeply into it. This not only adds in creating character depth, but also makes the world around him more interesting. The scene also is a great debut of Bones’ fighting skills. He is quite a skilled martial artist, relying on his own limbs rather than weapons to take down his opponents. However, he isn’t all-powerful when he is jumped by six guys at once; like most mortals, he is easily subdued.

After this action sequence, the story really becomes intriguing with the introduction of the grand conspiracy and some exposition on the troubles ailing the world and what certain factions are doing to correct these issues. As before, not too many details are given, but artist Osvaldo “Montos” Montpeller drops a number of different hints including robed figures worshiping at a dragon statue and a bloody royal crest. 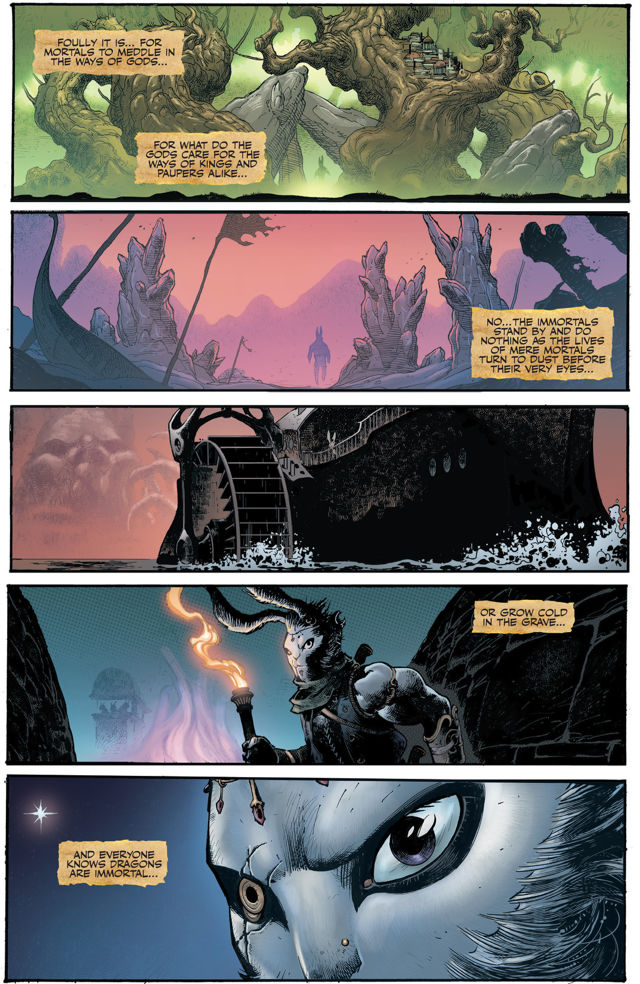 This leads into a very exciting action sequence that introduces a number of Bones’ colorful pirate crew. Montos begins the action sequence with some unique panel layouts. There is a full-page spread of a dwarf-like creature almost leaping out towards you with a number of different panels around him in a circular fashion. It is a great depiction showing how the dwarf’s charge scattered everyone in all different directions.

Unfortunately, not all of the panels are as unique or even as easy to read. In the subsequent panels somehow the dwarf has really been miniaturized, think Ant-Man small. It is unclear how this happened and a few panels later he is back to normal size. It is very strange. The next strange scene depicts Bones and his crew sneaking up a pair of stairs only to be stopped by a pair of guards. Bones leaps out a window and a few panels later is dropping in on the guards from above. It took a number of read-throughs to figure out there was a second higher window slightly above the guards.

That being said, Montos’ character designs are absolutely beautiful and the sheer number of them is outstanding. All of the characters are based on animals whether it be a rabbit, a bulldog, a snake, or a bobcat. If there is an animal in the wild, I expect it to show up at some point in this story. 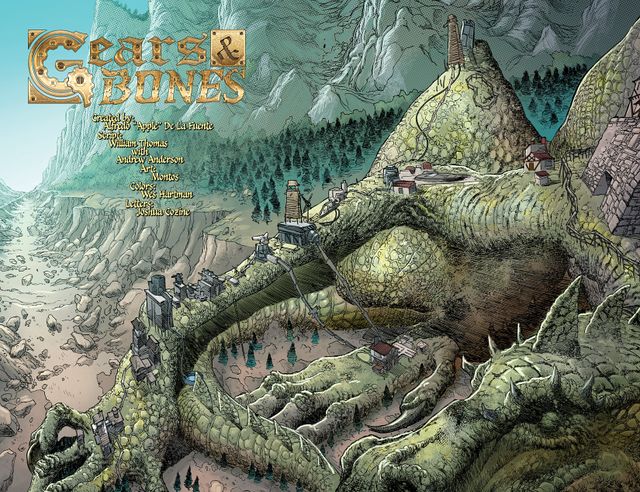 Wes Hartman and Tony Galvan combine to do the colors. I’m not a fan of the white background during the initial combat sequence, especially considering they are supposed to be inside a cave or at least in some kind of ravine. However, they do an excellent job highlighting Bones’ unconsciousness. The red and black makes you feel like a boot is hitting your own skull.

Gears and Bones #1 is a fun, fantasy adventure set in a rich, colorful world with some very interesting characters. Did I mention it has a really neat premise as well? William Thomas and Andrew Anderson tease out this expansive world, but also effectively introduce a strong protagonist and a number of interesting antagonists that have a rich history together. If you need some fantasy to add to your comics, I definitely recommend this book.