Vampirella may have met her match as she ventures deep into the newly-discovered catacombs on Mars and finds Aliens! Will she and her crew of human scientists be able to survive? How does it fare?

Writer Corinna Bechko lays out a very compelling plot that is extremely well paced, building up fear and tension with every flip of the page. She begins the story highlighting the danger Vampirella will find herself in by telling the story of two hooded vampires attempting to escape a fully grown Alien.

After this riveting, horror-filled slasher sequence, the book takes the course of a typical slasher film, introducing us to the young, naïve cast who most likely will not be making it out alive. There is some interesting dialogue regarding the discovery of the catacombs and Bechko maintains a sense of mystery as to what they have actually discovered. Could it be some kind of artifact? Needless to say, the discovery is important enough to send Vampirella to investigate.

The middle third of the book takes the naïve scientists on a path of discovery as Vampirella leads the team through the catacombs. Bechko does hint at a potential twist during this sequence due to the nature of one of the characters. Nevertheless, there is a ton of tension as you never know when the Aliens are going to make their appearance. 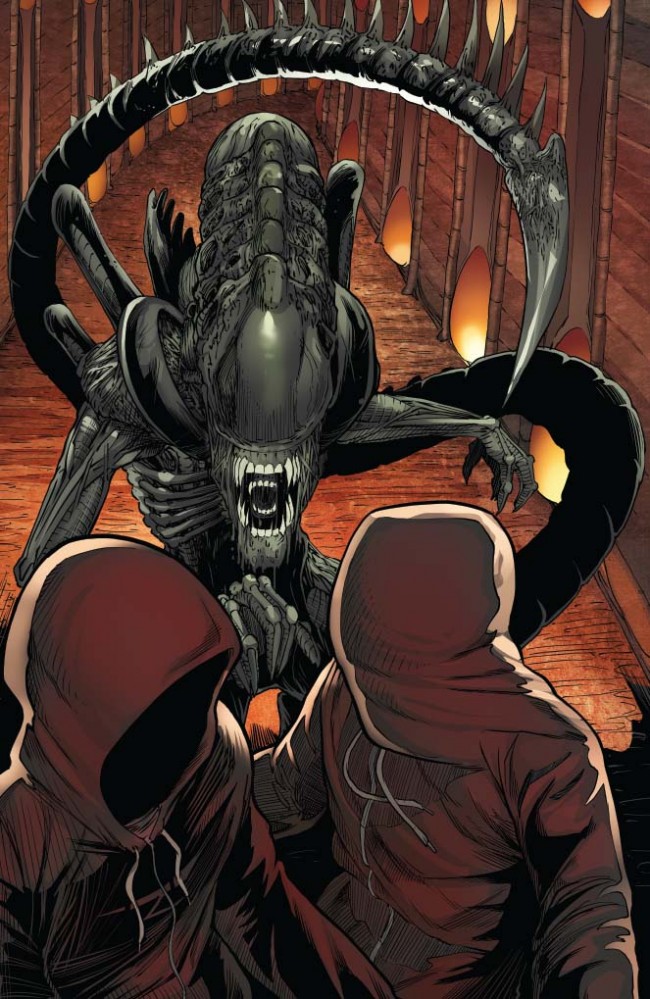 Helping create this tension or apprehension is artist Javier García-Miranda. He uses a number of different tactics from surprising the reader with the face of a dead Vampire jumping out of the page to a creepy panel where a gate door is slowly opening and all you can see are the feet of the crew. The panel layouts are also well done. On one page he highlights a breeding chamber and then focuses the next three panels on character interaction. Finally, the last panel shows a creepy alien coming out of one of the eggs just ready to spring and attack. This layout is the perfect example of how he builds on the fear and tension. There is a lingering in your mind, or maybe a tingling in your stomach, as your imagination runs wild with what the creature is going to do.

García-Miranda’s facial expressions are lacking. Many of the characters just have blank expressions, but when they do begin to show emotion it doesn’t look realistic. It isn’t natural fear or shock; instead, it looks very forced.

InLight Studios was on coloring duty and did they ever come through. They expertly use the lighting to up the horror factor. While the crew travels throughout the cave, they only have small flashlights which keep much of the surroundings in the dark. Due to the limited light it allows them to really draw your attention to the characters’ faces and get a sense of what their emotional state is. 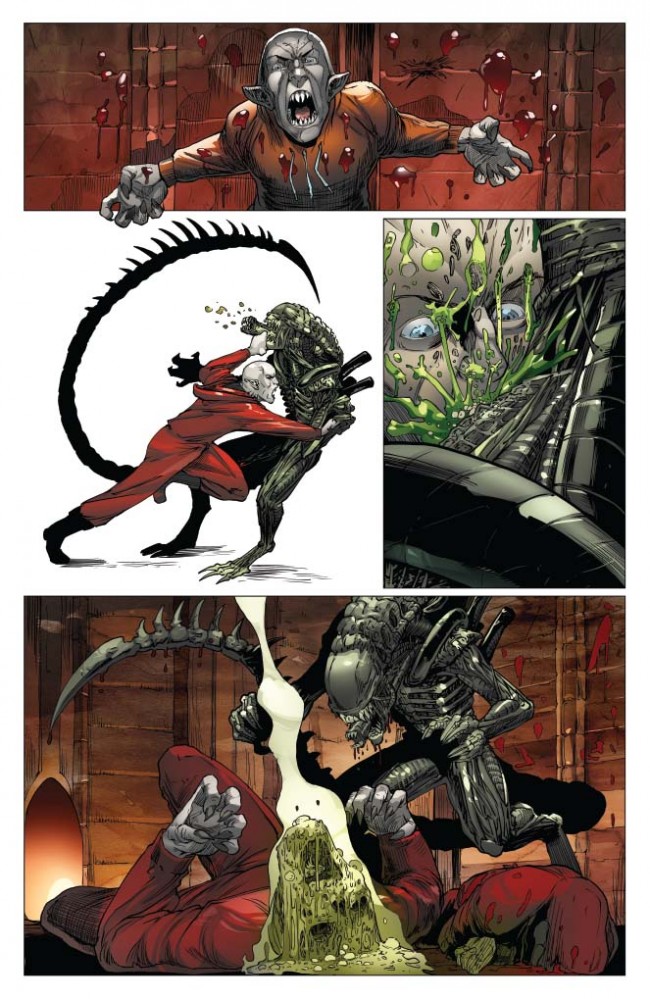 [easyazon_link identifier=”B013RDOWUK” locale=”US” tag=”bounintocomi-20″]Aliens / Vampirella #1[/easyazon_link] is a slasher-esque comic book that is well paced, has a few compelling characters, and a lot of tension. Bechko makes sure the Aliens are a good match for Vampirella, but it is still unclear whether she can hold her own against them. The artwork was well done except for the facial reactions. InLight Studios did an excellent job with the coloring creating a sense of tension the entire way through the book. If you are into the slasher genre, and even if you aren’t, I recommend this one because it was very well written.