[easyazon_link identifier=”B014I243FS” locale=”US” tag=”bounintocomi-20″]The Shadow[/easyazon_link] continues his hunt for the Society of United Magicians as they seek ever more grave methods of obtaining the Last Illusion. They are even plotting to end The Shadow. Will The Shadow be able to survive their traps or will he be used to obtain the Last Illusion? How does it fare?

The Shadow knows. I couldn’t resist, it just had to be written, and in all seriousness he does know!
Cullen Bunn begins the story with The Shadow reflecting on his relationship with the great Harry Houdini. The scene introduces new readers to The Shadow’s sense of absolute justice and his resolve to mete it out. It also displays his deep sense of loyalty to those he considers his friends, but also a sense of sadness and almost regret that I haven’t seen The Shadow display before.

In the following sequence, Bunn introduces a new villain and potentially more dangerous foe than the previously-introduced members of the Society of United Magicians. Bunn does a good job of displaying the character’s arrogance, power, and control. He immediately demands the respect of the other magicians and even sees himself as their better. However, this sequence also had some clunky writing, bouncing from the new villain’s declaration of his reputation to the introduction of his method of defeating The Shadow. It didn’t transition very well. However, Bunn does an excellent job of keeping the method mysterious while also building up the threat level.

Probably the best part of the book is Cullen Bunn’s use of Lamont Cranston. There is some great dialogue as Cranston wheedles out bits of information from an unsuspecting, wealthy businessman and former member of the Society of United Magicians. The only bad part is there is no revelation on how Cranston tracked down this contact. It just kind of happens, although Bunn does a decent job of attempting to portray Cranston as somewhat of a family friend. After getting piecemeal information and an understanding that the contact isn’t revealing all of his cards, The Shadow decides to make a visit. It is a really good portrayal of how The Shadow uses Cranston to achieve his goals. 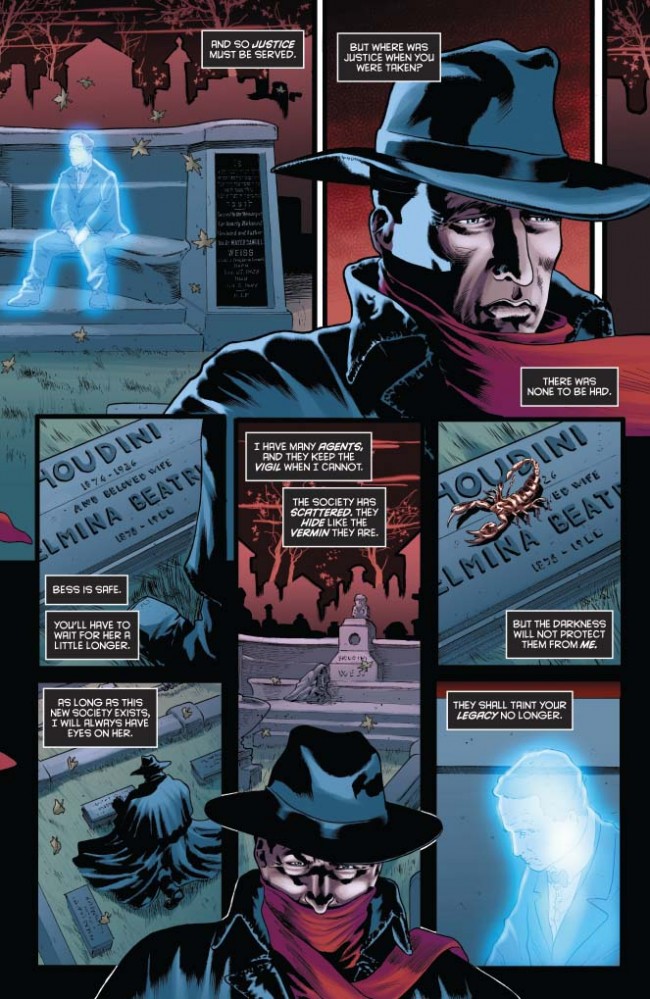 During The Shadow’s interrogation, the contact reveals the origin of the Last Illusion. It is quite interesting and introduces a new character that can potentially be a much larger villain in The Shadow’s wheelhouse moving forward in the story. During this sequence, there appeared to be an editing error as the dialogue was repeated on subsequent pages. Hopefully, this issue will be corrected in the final released version.

Artist Giovanni Timpano does a very good job detailing The Shadow’s sadness and regret in the opening sequence and then transitioning that sadness into resolve. He does it all just through The Shadow’s eyes; it is done very well. However, the panel layout during this sequence can be a bit confusing as he uses three columns, splitting the bookends in half and leaving the middle one full. It can make it a bit tricky to follow Bunn’s script.

The fashion and character designs are very well done. The main characters are very distinct and can be easily identified with what they are wearing and their unique physical features, such as styled blond hair or a well-groomed beard.

While the opening sequence with the focus on The Shadow’s face is well done, the rest of the book isn’t as detailed, relying on blurring backgrounds and individuals’ faces so details are hard to make out. One piece that really stood out was his page design during the flashback, detailing the origins of the Last Illusion. It really looks like something that could have come out of the 1500s. 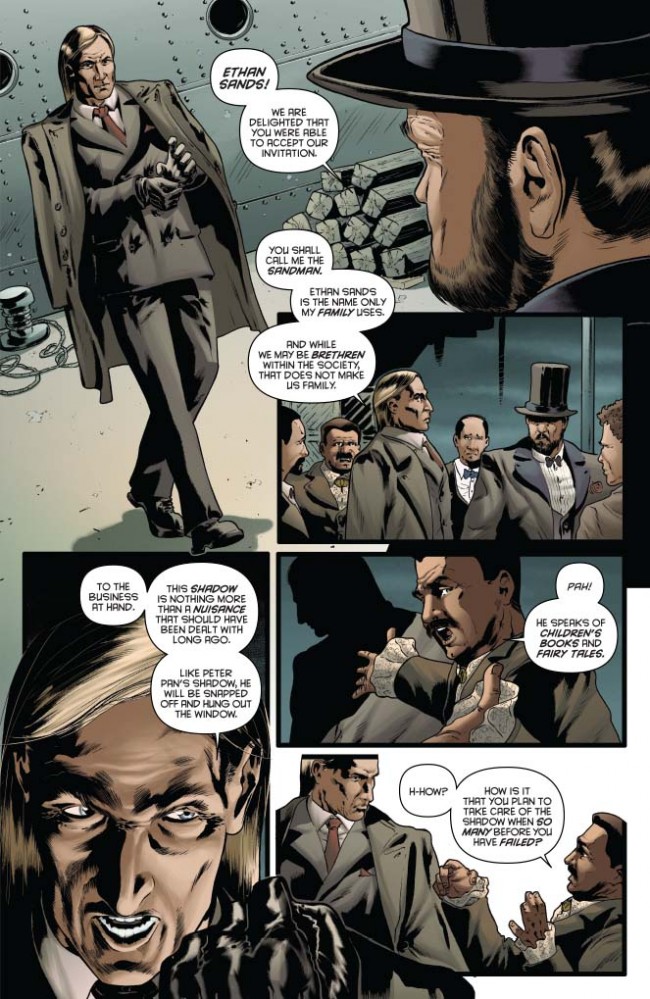 Marco Lesko’s colors really set the somber mood in the opening sequence with his use of blue and red lighting. The sadness almost jumps out of the page. I really enjoyed how he kept a dark tone throughout the book, usually having each scene dimly lit. It adds to the intensity as well as the mystery.

This is much improved from the first issue. Bunn has introduced a viable villain with some nasty plans and he explores parts of The Shadow’s personality that don’t seem to get all that much attention. There are some minor hiccups with transitions and the faulty editing with the duplicate dialogue, but the writing is much more interesting and there don’t seem to be continuity problems. Giovanni Timpano’s artwork is much sharper with some extremely compelling close-ups of The Shadow’s face and a compelling flashback scene detailing the Last Illusion’s origin.