​Hitting stores November 4, t​he explosive new series features original adventures of the fighter ace who thrilled millions and rocketed to status as a classic British comic character in the pages of legendary combat comic Battle, bringing World War II to incendiary life in the finest air warfare stories ever told! Ennis and artist Keith Burns are diving right back into the thick of the period action to present the character to a contemporary audience!

Legendary British fighter ace, Johnny ‘Red’ Redburn, returns once more as the commander of the Falcons – a Russian fighter squadron battling the Nazis in the skies over Stalingrad. But dogfighting Messerschmitts is about to become the least of his troubles when the NVKD – the notorious Soviet secret police – come calling!

“Johnny Red achieves a level of historical detail that I still find remarkable today,” said Ennis. “Johnny’s story is not just one of my favorites but a British comics classic!”

Johnny Red #1 ​will be available in stores and ​on ​digital devices from November 4. 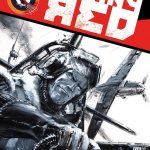