A group of kids go about their normal day in the suburbs of Metro City. They head to school, eat lunch, and then a few of them enjoy their own brand of extracurricular activity: Superhero watching. And do they ever make a major sighting. How does it fare? 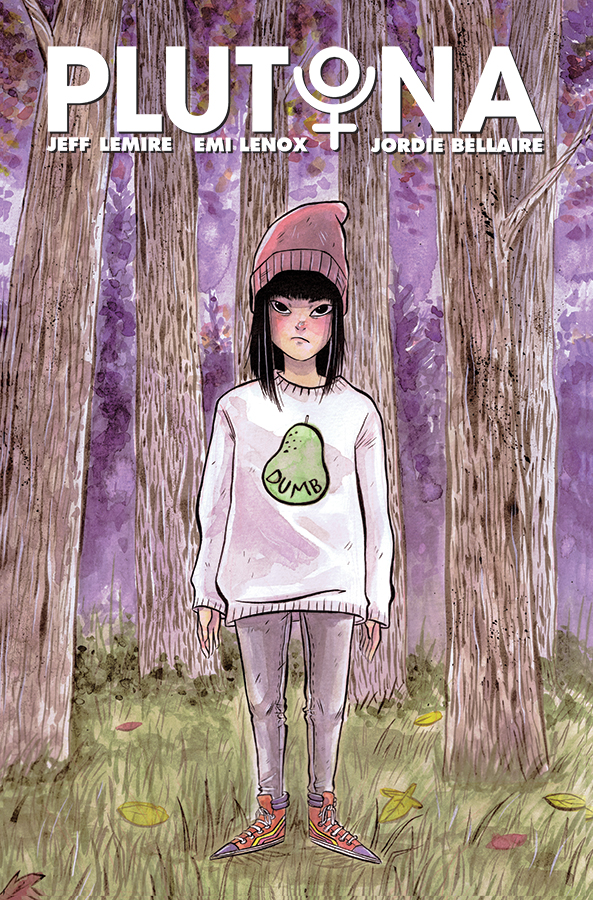 Jeff Lemire’s [easyazon_link identifier=”B013O98BAY” locale=”US” tag=”bounintocomi-20″]Plutona #1[/easyazon_link] is a very slow build leading up to the concluding massive revelation. He does a good job of really building out his four main characters, giving them some depth, although he may rely on some stereotypes a little bit. As for the characters themselves, they are all quite different. There is Teddy, an introverted boy who sticks to his room and tracks Superheroes. The second boy, Ray, is crying out for a friend, although his Roger Klotz-like actions may show otherwise. The third is Diane, an introverted yet very creative girl who has a talent for making clothes, but is very easily swayed to let others enjoy the benefit of her hard work. Finally, the second girl, Mie, is somewhat of a diva, who usually gets her way at least with her peers. There is a fifth kid, Mike, who is Mie’s younger brother, but Lemire doesn’t really explore his character although he is the one to make the discovery.

The pacing is done well. The characters don’t seem to be all that friendly with each other except for the two girls. Lemire uses this to jump between each of them as they go about their daily routine from waking up and dealing with their parents, to attending class, to hanging out in the lunch room, to walking home. It flows very nicely and Lemire spends plenty of time developing the characters, minus the younger brother.

Emi Lenox brings the characters to life with her engaging artwork that captures the life of an ordinary suburban kid’s lifestyle, although she does make it a point to highlight the differences between the characters as well. For example, Teddy’s room is extremely organized with each book in the proper place on the shelf. Contrast it with Diane’s room, which is a complete train wreck with clothes strewn all over the floor. 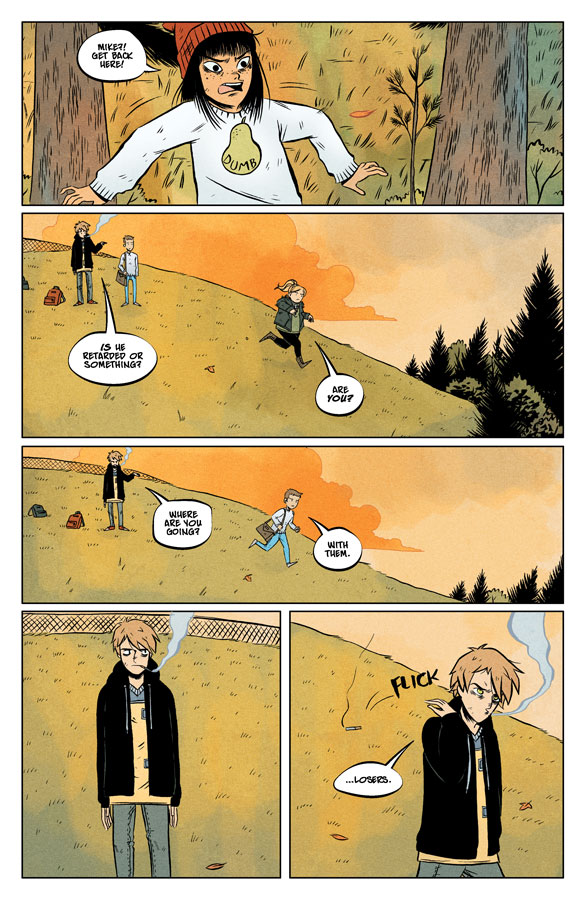 Lenox uses a unique panel design to introduce each of the four main characters. She does a close-up focusing on their eyes, but also places one of the other character’s eyes opposite them on the subsequent page. She also uses a basic hand clock in a number of panels to depict time passing.

She does a great job of building up suspense towards the end of the issue as the kids race through a forest searching for the younger brother, leaving small clues behind or having the characters catch their clothes on the trees.

Jordie Bellaire uses an earthy color palette of browns, greens, yellows, and oranges. It fits the pacing of the book which is very plodding. There is a transition from afternoon to night which takes place way too fast although it does add to the tension.

As a bonus, Lemire gives a look into who Plutona is and what she sacrifices for the city in a short comic, completely focused on her and her family. 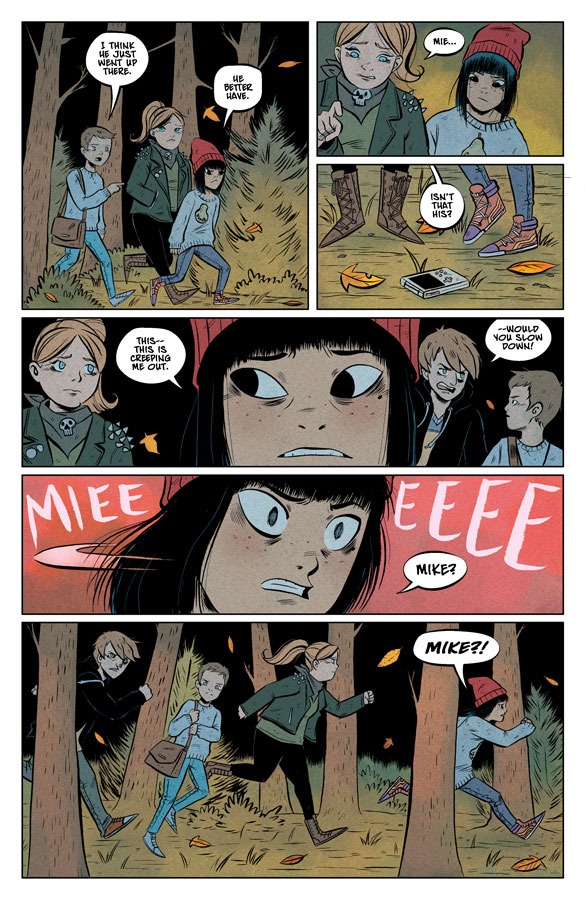 [easyazon_link identifier=”B013O98BAY” locale=”US” tag=”bounintocomi-20″]Plutona #1[/easyazon_link] is one of those books that is setting the stage for a greater story to come. It builds out unique and different characters, although they are a little stereotypical; however, there is plenty of room for growth. The story wades along slowly, really focusing on the relationship between the characters until the very end when they are really bonded in finding out where Mike disappeared to. The artwork is good and Lenox uses some good tactics to display the change of time and also introduce each of the characters.