Watson plots with Sherlock’s brother, Mycroft, in order to get Sherlock to Vienna to receive treatment for his cocaine addiction. Their plot is elaborate and Holmes is quick to take notice. He sets off in a flurry to track down Professor Moriarty with his trusty hound, Toby. How does it fare?

Writers David and Scott Tipton do a good job of building up suspense and tension throughout the issue. In the beginning of the issue, they build the suspense by having Watson and Mycroft avoid Sherlock’s vigilant watch of Professor Moriarty’s house. After this visit, it turns into Watson constantly fretting about whether or not Holmes will discover him and Mycroft’s secret rendezvous.

They continue to use a narrative format with dialogue in between. It creates quite a bit of confusion at times, especially when the narrative seems to hint at a past topic of discussion, but that point has never been discussed. For example, Watson’s narrative discusses Professor Moriarty and a tragedy he referred to, but this is the only mention of the tragedy in the entire issue. No other context for this piece of narrative is given and you find yourself flipping back to see if you missed anything. There is also an occurrence where the narrative informs you about a point of discussion that will not be discussed, yet not two panels later there is a discussion on that topic.

Despite these errors, the overall story that David and Scott Tipton weave captures the essence of Sherlock Holmes. His detective skills are in top form and he even busts out one of his more elaborate disguises. The inclusion of Toby makes it even more enjoyable, especially when he charges off, his nose to the ground, tracking down the scent of vanilla extract! 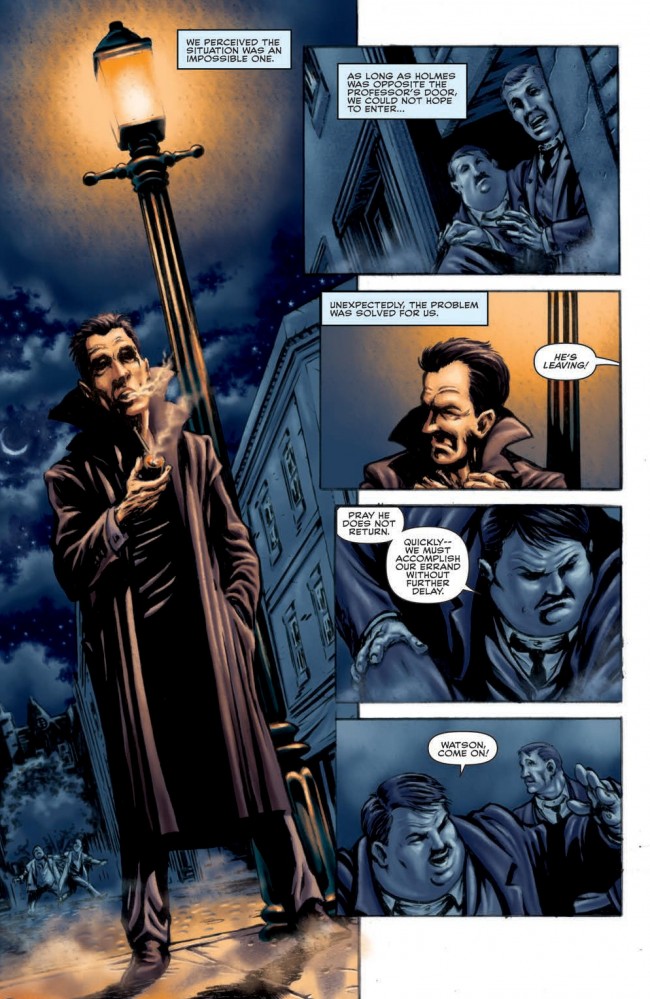 These enjoyable moments are dampened somewhat by Watson’s diagnosis of Holmes’ cocaine addiction. The inclusion of these scenes is necessary to remind us of the dire problem Holmes has found himself in. Although, the idea of the major twist still lingers as confirmation of his cocaine habit is only presumed by Dr. Watson; we actually never see Sherlock using.

Ron Joseph’s artwork helps David and Scott build tension, provide plenty of suspense, get caught up in the fun chase scenes with Toby, and then bring it back with the looming shadow of Holmes’ addiction. The tones he manages to create transition effortlessly from one to the other.

The facial expressions Joseph uses are great from Mycroft’s determination to sneak into Moriarty’s house to Watson’s surprise as Toby lunges forward pulling him along with him! There are definitely some issues though. During the scene with Mycroft, Joseph’s last panel depicts Mycroft with a very bushy mustache while other panels had his mustache much thinner.

Joseph also does a wonderful job of capturing a number of different geographical locations as well as landscape scenes. You can tell the difference between London and Vienna just by the way he depicts the street sizes. Vienna has much larger, sweeping avenues compared to London’s narrower streets. The architecture of the buildings is also different. 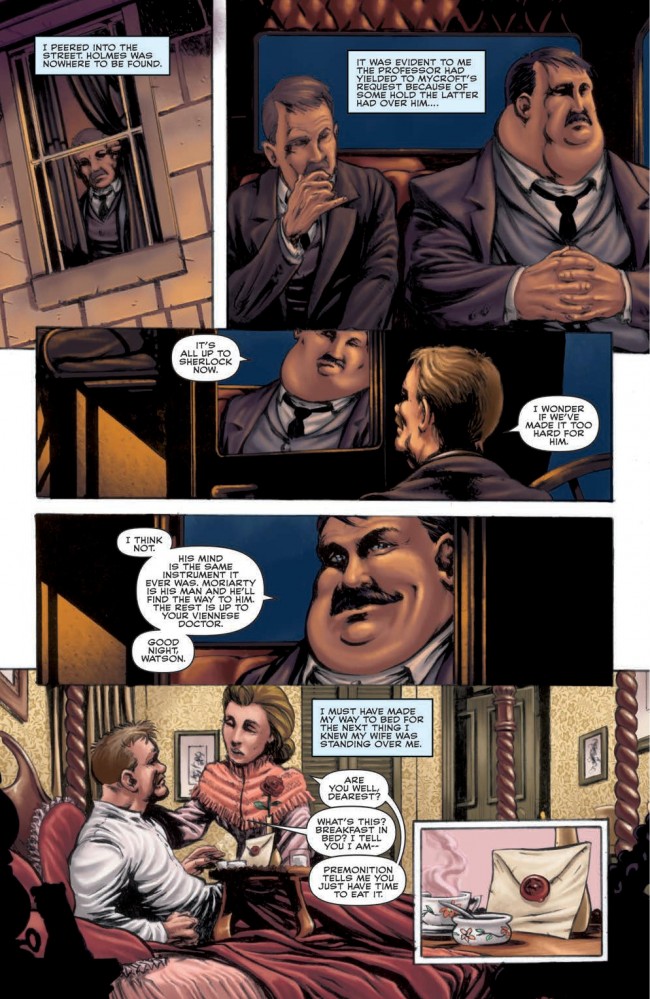 [easyazon_link identifier=”B01478W40O” locale=”US” tag=”bounintocomi-20″]Nicholas Meyer’s Seven-Per-Cent Solution #2[/easyazon_link] is a definitive improvement from the first issue, although it is still not without its faults. Seeing Holmes in all his detective glory is refreshing and you get sucked into the excitement from the first tug on the leash from Toby. If you are into Sherlock Holmes, this is a fun read that explores a bit of the character’s darker side. I imagine the book will only improve from here as a real battle of the minds will begin in the next issue!