Red Sonja and Conan were marching off to battle in the first issue and in this issue we get a gory, action-packed war that puts the two champions to the test. Will they be able to defeat Kal’ang in time? How does it fare?

Writer Victor Gischler changes up the method of storytelling in [easyazon_link identifier=”B014DWD0OS” locale=”US” tag=”bounintocomi-20″]Red Sonja / Conan #2[/easyazon_link]. Instead of telling us the story of the battle in real time, he recounts it from Red Sonja’s memories as well as through Red Sonja’s interrogation of a scavenger.

Despite this style of storytelling, the book moves at a rapid pace. I was actually surprised when I got to the end; it read that quickly. Helping the pace is pretty much non-stop action except for a minor break where Gischler switches perspectives to Kal’ang and the Seer. The switch to Kal’ang, as well as from past to present, are done seemingly effortlessly with great transitions highlighting the complementary nature of Gischler’s script and Roberto Castro’s artwork. As an example, the first transition to Kal’ang depicts Red Sonja looking out over the battlefield towards Kal’ang’s palace, asking the scavenger a rhetorical question about where two monsters that ravaged Conan and Red Sonja’s army came from. 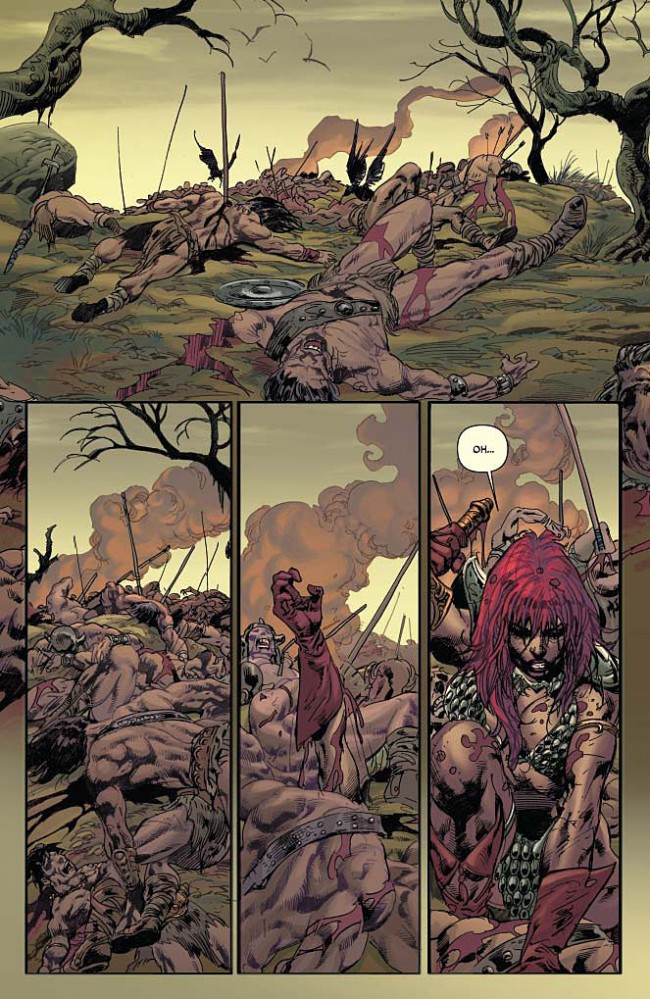 There are some confusing parts in the dialogue, specifically when Red Sonja is interrogating the scavenger. In the beginning of the story, he and his compatriots appears to be scavengers unaffiliated with either Kal’ang or Conan and Red Sonja’s forces. However, later on the dialogue shifts, making it seem they are part of Red Sonja and Conan’s mercenary forces. If they are part of their forces, the entire interrogation and character of the scavenger seems out of place.

Robert Castro’s artwork was hit or miss. His monster design is very cool and unique. They are similar to Abomination mashed up with Goro from Mortal Kombat. Probably the best part is the actual tease of the monsters. He shows their shadow to us twice before we get an actual look at them. It builds up the anticipation very well. His normal combat scenes with Conan and Red Sonja slicing down Kal’ang’s human army are also well done and very fluid as Conan swings a sword and axe in each hand and Red Sonja lashes out with two swords.

Castro makes some continuity errors in the weapons Conan is wielding. In some panels he has two axes while in others he has an axe and a sword. There was also one panel where an arrow is supposed to be piercing a man’s throat, yet it looks more like it is flying behind his neck. There are no puncture wounds and no blood coming out of his neck. Also, towards the end of issue, Sonja’s face becomes part of her neck; it looks awkward. 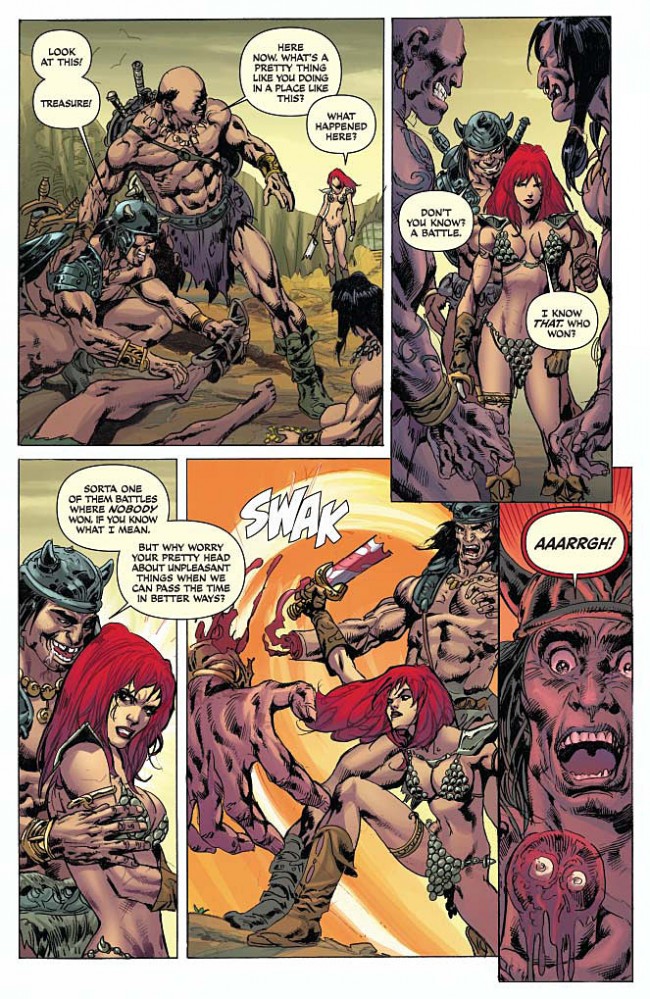 [easyazon_link identifier=”B014DWD0OS” locale=”US” tag=”bounintocomi-20″]Red Sonja / Conan #2[/easyazon_link] is a very fast-paced, combat-filled adventure focused predominantly on Red Sonja as she attempts to recollect the events of the battle against Kal’ang’s forces. For the most part the story is well-written, although the interrogation dialogue does get a little confusing. The artwork for the most part is decent although there are a number of mishaps, specifically the panel with the arrow through the soldier’s neck. If you are looking for a good action story this week, Red Sonja / Conan #2 has plenty of it.