Marvel’s Red Wolf who was recently seen in the pages of Secret Wars’ 1872 will be getting his own ongoing series.

The character made its first debut in Avengers #80 under the creative helm of Roy Thomas and John Buscema. Originally William Talltrees, Thomas and Buscema’s version of Red Wolf was born in Wolf Point, Montana and was forced into selling his property to a corrupt businessman who later killed Red Wolf’s family. He was visited by Owayodata, the Native American god of hunting, and empowered him with the spirit of Red Wolf.

In the new ongoing series, Red Wolf will call the American Southwest his home and he will fight to protect it from corrupt organizations looking to control the land. It is unclear if the character will still be William Talltrees or if another has taken on the powers of the spirit of Red Wolf.

The series will be written by Nathan Edmondson with Dalibor Talajic on artwork as well as Jeffrey Veregge doing the covers. Veregge brings his own unique perspective to the series being a member of the Port Gamble S’Kallam Tribe based out of Kingston, Washington. Not only will he be doing the cover art, but he will also be consulted on characterization and design for the series.

Veregee is excited about taking on the character. He told Mashable:

There’s not a character like Red Wolf out there right now. As a native, I’m really excited to see that he can do things, he can figure out things and stand with Captain America, and hold his own in this universe. That’s what’s awesome about it: You have all these characters of different nationalities and ethnicities, but it’s not all about their culture. It’s about them being a hero.

Series editor Jacob Thomas describes Red Wolf, “He doesn’t have amped up strength or tech, he’s got quick wits, hard fists, and an unshakeable [sic] sense of of justice. Underestimate him at your own peril.” 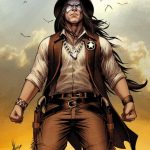 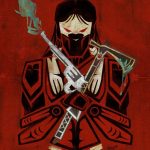