The world is at peace and Voltron has remained dormant for over 200 years. Yet, a select group of monks remains vigilant in training potential pilots. And vigilant they should be, for Haggar, the Mother of Monsters, lies dormant waiting to be awakened by the hand of conquerors. How does it fare?

Cullen Bunn begins [easyazon_link identifier=”B014DSWEEY” locale=”US” tag=”bounintocomi-20″]Voltron: From The Ashes #1[/easyazon_link] by introducing us to the villain because any decent hero needs a good villain. He introduces the villain with basic exposition, noting her past. In addition, Bunn does some excellent wordsmithing, detailing the villain’s ability to unleash nightmares. Yet, she is trapped within her own nightmare.

As one can expect, Bunn beautifully transitions from describing Haggar to detailing the nightmare she is experiencing. If one was having a vivid nightmare, this one would be full of excitement, action, and a constant sense of danger.

The dialogue is crisp and concise. It relays the necessary facts of the battle and how the Voltron Force is adapting to their dynamic enemy. After a certain point, the dialogue shifts and focuses on the emotions of Voltron’s pilots. Bunn is able to show their indomitable will and courage, but also their realistic assessments.

After the exciting battle sequence, the book makes a drastic shift to the present day, focusing on what would appear to be the upcoming main Voltron pilot. Bunn delves into his character in excellent fashion during a training exercise. He displays his stubbornness, lack of respect for the rules, and adaptability. A nice little surprise is Bunn’s choice of outcome in the training exercise. 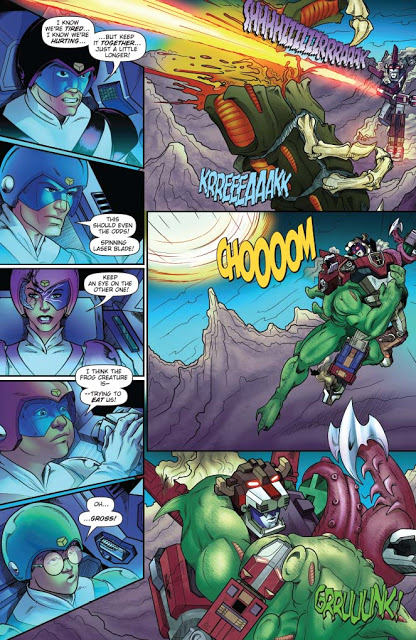 The story is tight, flows well, and gives one a good sense of where the players stand leading up to the inevitable conflict moving forward.

Blacky Shepherd’s artwork has some really awesome panels and shots, but also has some that can be a little hard to follow. His use of panels during the Voltron combat sequence is done really well. He places the pilots on the left hand side of the page with the action taking place on the right. It makes sure all of the team members are included and working as one to take down their enemies.

There are quite a number of different monster creations and all of them are quite unique from large centipede creatures to frog-like giants, and even some dinosaur-inspired ones.

However, some of the details of the combat don’t align with Bunn’s writing. At one point, Bunn writes “It’s Constricting!” The panel depicts the monster shooting some kind of liquid, not wrapping itself around Voltron. The combat is also very chaotic and makes it difficult to follow what is happening. It is unclear whether the villains are being tossed through the air or are leaping to attack. 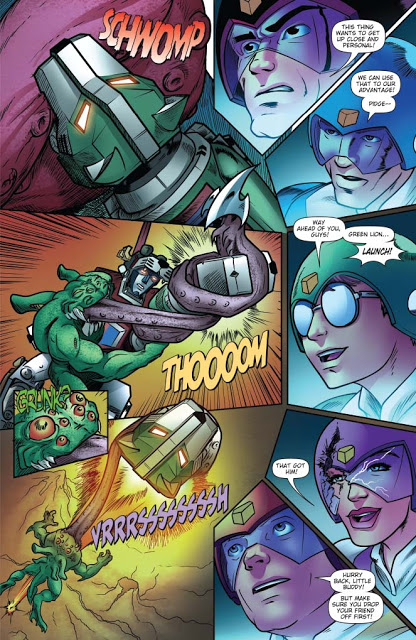 Adriano Augusto’s colors are very vibrant, capturing the iconic nature of the 80s. The space panels are extremely gorgeous to look at with dark blues and purples sprinkled with bright stars. The use of laser beams throughout the issue is effectively colored to draw your eye whether they are artillery shots from some of the monsters or training lasers. It highlights and focuses the point of action.

[easyazon_link identifier=”B014DSWEEY” locale=”US” tag=”bounintocomi-20″]Voltron: From The Ashes #1[/easyazon_link] is a great jumping-on point, introducing a new Voltron Force team to combat one of Voltron’s steady villains. Cullen Bunn paces the book very well and uses a concise and crisp script to provide exposition and characterization as well as to capture the intensity of combat. Blacky Shepherd’s artwork has some standout moments with monster creation and panel layout; however, the main Voltron action sequence is a little bit confusing and can be hard to figure out what exactly is happening from page to page.