DC Comics not only released their December solicitations, but they have also unveiled their collected editions group solicitations for January and February. The headliner as to be expected is Frank Miller’s The Dark Knight Returns as the trilogy comes to a close with Dark Knight III: The Master Race. There are also some hidden gems in here such as Dennis O’Neil’s Shaman story line from LEGENDS OF THE DARK KNIGHT #1-5 and Jack Kirby’s Darkseid War. Any books catch your eye that you plan on picking up? 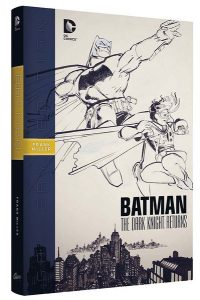 Advance solicit • On sale February 2016 • 216 pg. FC, 13” x 20” • $175.00 US
Commemorate the 30th anniversary of one of the most defining works in comics history with the BATMAN: THE DARK KNIGHT RETURNS – FRANK MILLER Gallery Edition. Sourced from the original art that has been scanned from collectors worldwide, this is the collection we’ve all been waiting for. Featured within the hardcovers of this Smythe-sewn edition is Miller’s artwork from DKR #1-4, scanned in full color from the original black-and-white pages. Also included are the covers, related art and previously unpublished pieces showcasing Miller’s artwork as never seen before.
Graphitti Designs’ Gallery Editions replicate the look, feel and attitude of the artwork. Every page is reproduced at original size on heavy paper stock to provide the fan and collector with museum-quality reproductions that are obtainable nowhere else.
Though we were unable to locate every original from this story, we are pleased to present to fans everywhere the best presentation of the artwork from this historic series ever seen. This is your only opportunity to see the artwork that truly changed Batman forever. 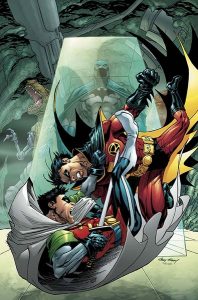 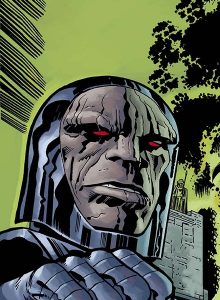 Written by JACK KIRBY
Art by JACK KIRBY, VINCE COLLETTA and MIKE ROYER
Cover by RYAN SOOK
On sale DECEMBER 16 • 96 pg, FC, $7.99 US
Darkseid has been making trouble for a long time now—and here are some of his earliest epics, from the pages of MISTER MIRACLE #1, NEW GODS #1 and 7, and THE FOREVER PEOPLE #1! 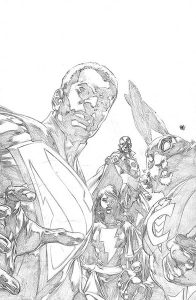 Written by GRANT MORRISON
Art and cover by IVAN REIS
On sale DECEMBER 23 • 96 pg, FC, $7.99 US • RATED T
The bookend issues that opened and closed the epic known as THE MULTIVERSITY are re-presented here in this new Director’s Cut Edition, with script pages, sketch material and the art of Ivan Reis presented in pencil form. 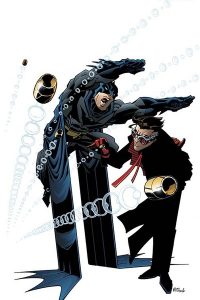 Written by ED BRUBAKER
Art by SCOTT McDANIEL, KARL STORY and STEFANO GAUDIANO
Cover by SCOTT McDANIEL
On sale JANUARY 27 • 288 pg, FC, $19.99 US
Ed Brubaker’s legendary run on Batman is collected, starting with stories from BATMAN #582-586, 591-594 and BATMAN: OUR WORLDS AT WAR #1, in which the Dark Knight faces The Penguin, Deadshot and more! 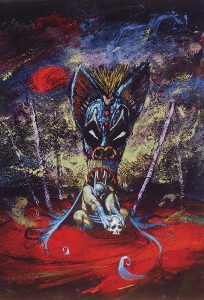 Written by DENNIS O’NEIL
Art by ED HANNIGAN and JOHN BEATTY
Cover by GEORGE PRATT
On sale JANUARY 20 • 136 pg, FC, $14.99 US
In this tale from LEGENDS OF THE DARK KNIGHT #1-5, Batman returns from a case to find Alfred missing, while rumors of human sacrifice and strange, primitive rituals circulate in Gotham City. Now, Batman must find the madman who’s been terrorizing the city—but the trail leads back to Wayne Manor! 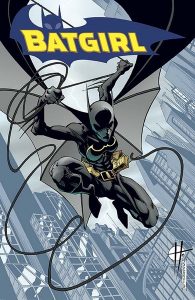 Written by KELLEY PUCKETT and SCOTT PETERSON
Art by DAMION SCOTT, ROBERT CAMPANELLA and others
Cover by DAMION SCOTT and ROBERT CAMPANELLA
On sale JANUARY 20 • 328 pg, FC, $19.99 US
Cassandra Cain is back in this new collection of BATGIRL #1-11 and ANNUAL #1! Trained from childhood by a notorious assassin, Batgirl has the ability to sense her opponents’ moves before they happen. But when an attempt to “fix” Batgirl’s inability to speak robs her of this sixth sense, she must train with original Batgirl Barbara Gordon to regain her former prowess and live up to Batman’s expectations. 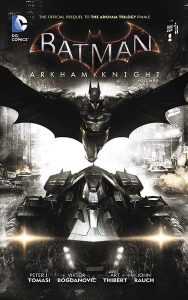 Written by PETER J. TOMASI
Art by VIKTOR BOGDANOVIC, IG GUARA, ROBSON ROCHA and others Video game cover art
On sale JANUARY 6 • 144 pg, FC, $14.99 US
Collecting the first four issues of the new series! The Joker is dead. Arkham City is closed. As a new day begins, Bruce Wayne finds himself in devastating pain, recovering from his injuries and questioning whether his role as Batman is still necessary to the city’s survival. But can even death keep The Joker from tormenting the Dark Knight? 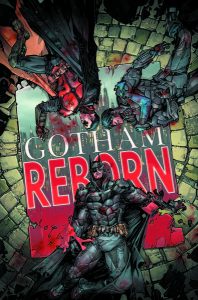 Written by PETER J. TOMASI
Art by VIKTOR BOGDANOVIC, IG GUARA, JULIO FERREIRA
Video game cover art
On sale FEBRUARY 24 • 160 pg, FC, $22.99 US
In these tales from BATMAN: ARKHAM KNIGHT #5-9, Bane is back—and he’s leading a small army of followers to claim Gotham City as his own! It’s up to Batman to stop him—but a surprising ally may turn the tide of battle against the Dark Knight! And while the Scarecrow gathers his forces, the Suicide Squad takes aim at Bruce Wayne! 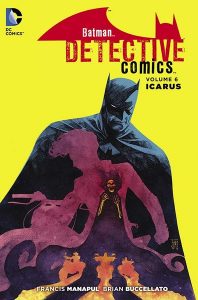 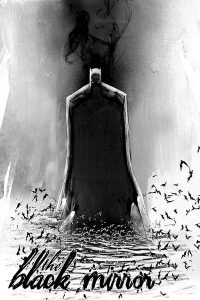 Written by SCOTT SNYDER
Art by JOCK and FRANCESCO FRANCAVILLA
Cover by JOCK
On sale FEBRUARY 17 • 296 pg, B&W, 7.5” x 11.5”, $34.99 US
Presenting DETECTIVE COMICS #871-881 in black and white! A series of murders pushes Batman’s detective skills to the limit and forces him to confront one of Gotham City’s oldest evils. Can Batman and Commissioner Gordon unravel this mystery in time to save Gotham City? 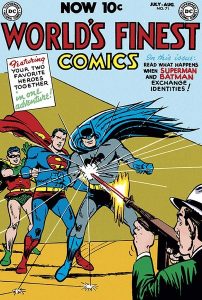 Written by EDMOND HAMILTON and others
Art by CURT SWAN, DICK SPRANG and others
Cover by DARWYN COOKE
On sale MARCH 9 • 640 pg, FC, $75.00 US
Superman and Batman team up in these stories that guest-star Robin, Lois Lane, Lex Luthor and The Joker! Collects stories from SUPERMAN #76 and WORLD’S FINEST COMICS #71-96. 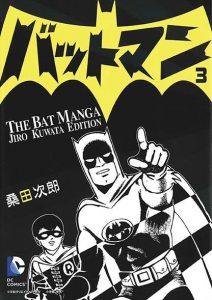 Written by JIRO KUWATA
Art and cover by JIRO KUWATA
On sale JANUARY 27 • 336 pg, B&W, 3 of 3, $14.99 US
Jiro Kuwata’s classic take on the Caped Crusader continues! In this final BATMANGA volume, Batman and Robin take on villains including Planet King—a criminal with seemingly infinite powers, plus the Robot Robbers, Clayface, Catman and more! 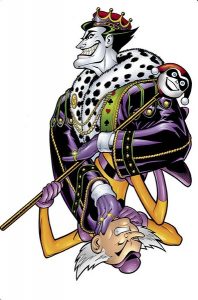 Written by JEPH LOEB and others
Art by ED McGUINNESS and others
Cover by ED McGUINNESS and DEXTER VINES
On sale JANUARY 13 • 256 pg, FC, $19.99 US
Collecting an unforgettable, twisted story, originally presented in SUPERMAN #160-161, ADVENTURES OF SUPERMAN #582-583, SUPERMAN: MAN OF STEEL #104-105, ACTION COMICS #769-770 and SUPERMAN: EMPEROR JOKER #1. In this tale of a reality gone wrong, Superman must struggle against The Joker, Emperor of the universe! 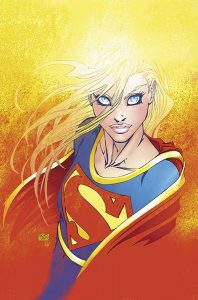 Written by JEPH LOEB, JOE KELLY, GREG RUCKA, JUSTIN GRAY and JIMMY PALMIOTTI
Art by IAN CHURCHILL, NORM RAPMUND, ED BENES, AMANDA CONNER and JIMMY PALMIOTTI
Cover by MICHAEL TURNER
On sale JANUARY 27 • 304 pg, FC, $16.99 US
In these stories from SUPERGIRL #0-10 and 12, Kara Zor-El, Superman’s cousin from Krypton, adjusts to her life on Earth, crossing paths (and trading blows) with the JSA, the Teen Titans and the Outsiders along the way. But while she’s facing off against other heroes, her cousin’s nemesis Lex Luthor has uncovered a truth that could change the Girl of Steel forever! 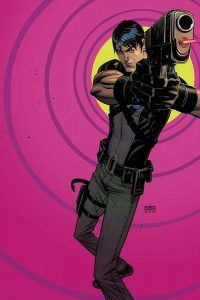 Written by TIM SEELEY and TOM KING
Art by MIKEL JANIN and STEPHEN MOONEY
Cover by ANDREW ROBINSON
On sale JANUARY 20 • 160 pg, FC, $14.99 US
As Dick Grayson digs into SPYRAL and learns about his new partner, Helena Bertinelli, how can he keep track of all the lies? Plus: Dick Grayson goes toe-to-toe with the Midnighter! Collects GRAYSON #1-4, a story from SECRET ORIGINS #7 and GRAYSON: FUTURES END #1.

GRAYSON VOL. 2: WE ALL DIE AT DAWN TP 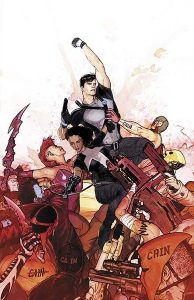 Written by TIM SEELEY and TOM KING
Art by MIKEL JANIN and STEPHEN MOONEY
Cover by MIKEL JANIN
On sale JANUARY 20 • 144 pg, FC, $14.99 US
In these tales from GRAYSON #5-8 and GRAYSON ANNUAL #1, Grayson must stop Paragon from using the body parts of a dead villain to create something far more sinister. Then, Dick goes toe-to-toe with Midnighter, and he and Helena Bertinelli battle foes from their past: the Fist of Cain! 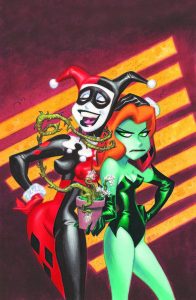 Written by PAUL DINI, RONNIE DEL CARMEN and TY TEMPLETON
Art by BRUCE TIMM, SHANE GLINES, RICK BURCHETT, DAN DECARLO and STEPHANE ROUX
Cover by BRUCE TIMM
On sale FEBRUARY 10 • 176 pg, FC, 7.0625” x 10.875”, $24.99 US
From Paul Dini and Bruce Timm, the masterminds behind the critically acclaimed Batman: The Animated Series, comes this early adventure of Harley Quinn and Poison Ivy, packed with hilarious hijinx and tons of action! Harley and Ivy want to take down the Batman once and for all, but first, Harley’s got to prove that she has what it takes to make it as a bona fide villain in Gotham City. This new hardcover also includes tales from BATMAN ADVENTURES HOLIDAY SPECIAL #1, BATMAN: GOTHAM KNIGHT #14, BATMAN AND ROBIN ADVENTURES #8, BATMAN ADVENTURES ANNUAL #1, BATMAN ADVENTURES #1 and BATMAN BLACK AND WHITE #3, all featuring Harley Quinn! 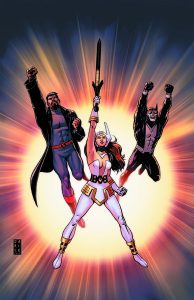 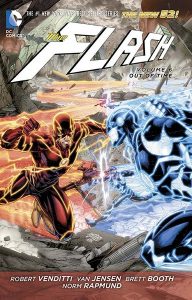 Written by ROBERT VENDITTI and VAN JENSEN
Art by BRETT BOOTH, NORM RAPMUND and others
Cover by BRETT BOOTH and NORM RAPMUND
On sale JANUARY 13 • 208 pg, FC, $16.99 US
In these tales from THE FLASH #30-35, ANNUAL #3 and THE FLASH: FUTURES END #1, The Flash’s powers have failed him time and again at great cost to him and the city he has sworn to protect. Now he’s coming back to the current time to stop the one event that destroyed his life. And in the present, Barry Allen must contend with thieves trying to capitalize on the devastation of FOREVER EVIL. 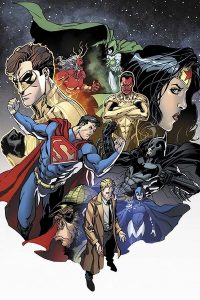 Written by TOM TAYLOR and BRIAN BUCCELLATO
Art by MIKE S. MILLER, BRUNO REDONDO and others
Cover by AARON LOPRESTI
On sale FEBRUARY 10 • 176 pg, FC, $24.99 US
In these tales from issues #8-12 and ANNUAL #1, Batman must ask for help against Superman from the one person he would never trust: John Constantine! But will even the might of the dark mage’s power be enough against the forces that stand against them? 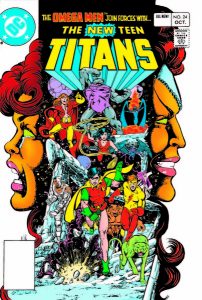 Written by MARV WOLFMAN and GEORGE PEREZ
Art by GEORGE PEREZ, ROMEO TANGHAL and others
Cover by GEORGE PEREZ
On sale JANUARY 20 • 224 pg, FC, $19.99 US
When Cyborg’s ex-girlfriend is murdered, Robin, Kid Flash, Wonder Girl and Raven must search for answers deep within a terrifying cult. Their hunt brings them face-to-face with the Church of Blood, forcing them to fight for their lives! Collects THE NEW TEEN TITANS #21-27 and ANNUAL #1. 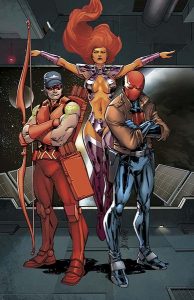 Written by SCOTT LOBDELL
Art by GERALDO BORGES, R.B. SILVA and others
Cover by GIUSEPPE CAMUNCOLI
On sale JANUARY 6 • 144 pg, FC, $14.99 US
After discovering who kidnapped Starfire, Red Hood turns to the only thing he knows can overcome them: Venom, the drug that made Bane a super-powered killer! Collects issues #35-40, plus RED HOOD AND THE OUTLAWS: FUTURES END #1 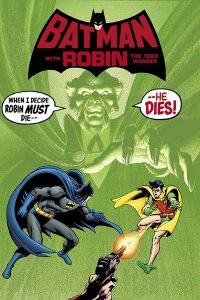 Written by DENNIS O’NEIL, FRANK ROBBINS and others
Art by NEAL ADAMS, IRV NOVICK, DICK GIORDANO and others
Cover by NEAL ADAMS
On sale JANUARY 20 • 584 pg, B&W, $19.99 US
In this new collection of tales from BATMAN #229-244 and DETECTIVE COMICS #408-426, Batman returns to his roots as the Dark Knight Detective, operating on his own in the shadows of Gotham City. With Robin away in college, Batman faces new foes and old, including Two-Face, Man-Bat and Ra’s al Ghul, making his debut appearance. 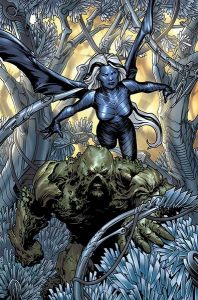 Written by CHARLES SOULE
Art by JESUS SAIZ, JAVI PINA and others
Cover by JESUS SAIZ
On sale JANUARY 27 • 200 pg, FC, $16.99 US
In these stories from issues #35-40, ANNUAL #3 and SWAMP THING: FUTURES END #1, Swamp Thing is about to meet the avatar of a whole new Kingdom whose impact on the lives of all runs deep: the Machine! But Alec Holland has a humanity the Machine Kingdom lacks, and that gives him an edge! Still, no man—not even a plant elemental—is an island, and Swampy must seek out his true love, Abigail Arcane.