Image has released their Collected Editions that will be on sale come December and there is quite a number to choose from. Michael Moreci’s sci-fi thriller Roche Limit: Clandestiny will be available in trade paper back while Tim Seeley’s Revival gets a hardcover edition for Volume 3 and a trade for Volume 6. Which ones are you looking at getting for yourself or maybe as a gift for a friends and family for the holidays? 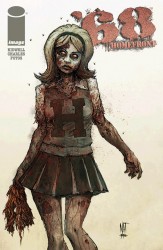 The Canadian snow runs red as Vietnam draft-dodgers flee the US seeking asylum with neutral neighbors to the north in ’68 DODGERS. And deep in the Butchertown district of San Francisco, a bloodthirsty madman who calls himself The Zodiac completes with the living dead for headlines, daring the remnants of a fragmented police force to catch him if they can in ’68: BAD SIGN! Five full issues plus a cover gallery, pin-ups, and tons of behind-the-scenes extras available nowhere else! 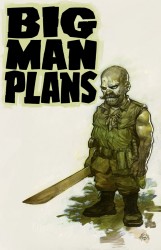 The complete brutal and heartbreaking revenge tale by The Goon creator ERIC POWELL and co-writer TIM WIESCH. WITH 20 PAGES OF BONUS MATERIAL! 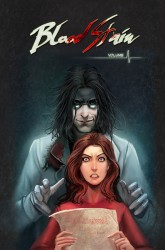 Mad science at its finest. Chemistry major, Elliot Torres has been unable to keep a steady job and eventually accepts one by a rumored mad scientist Dr. Vlad Stein. Humorous hijinks ensue as their collaboration becomes epic. 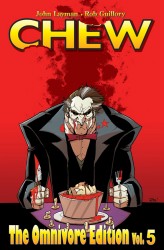 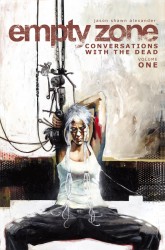 Eisner nominated artist JASON SHAWN ALEXANDER (Abe Sapien: The Drowning, Queen and Country) brings us a future eighty years after a worldwide black-out. The world is a much darker and scarier place. Corinne White is an ex-soldier turned black market spy, data courier, manic-depressive, alcoholic. Punishing herself for mistakes from her past, Corinne is brought out from her spiral when she’s contacted by her dead friends, who inform her of a plot to reanimate the bodies of the dead by a psychotic billionaire. EMPTY ZONE follows Corinne as she confronts these undead monsters and comes to terms with her past.

“… this is truly above and beyond anything I’ve seen before.”—Mike Mignola (HELLBOY) 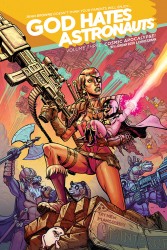 The incredibly strange, totally true story of the Power Persons Five continues! Be sure to hunker down as our world is invaded by crab people and the evil King Tiger Eating a Cheeseburger! That’s right. You heard me. Hunker down! 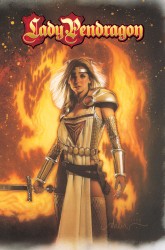 A classic from the Golden Age of Image Comics, collected in trade paperback for the first time! Pagan imagery and early Christianity clash across time in Matt Hawkins’ acclaimed tale of medieval mayhem and transtemporal quests! In 541 AD, Guinevere, widow of King Arthur, attempts to unite the Britons under the banner of Excalibur and the Goddess. In 1999, her descendant, Jennifer Drake, unravels a mystery that could end the world—unless she claims her birthright, and the sword Caliburn. Guinevere faces traitors on all sides, and Jennifer battles the wicked Mordred and Morgana—can the righteousness of any god or goddess triumph over evil? 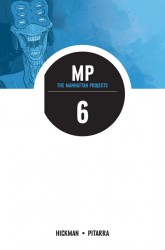 The sixth volume of the award-winning THE MANHATTAN PROJECTS: THE SUN BEYOND THE STARS.

Collects THE MANHATTAN PROJECTS: THE SUN BEYOND THE STARS #1-4 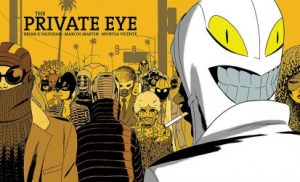 Years after the digital cloud “bursts” and exposes all of our worst secrets, THE PRIVATE EYE is set in an inevitable future where everyone has a secret identity. Following an unlicensed P.I. who is thrust into the most important case of his life, this sci-fi mystery explores the nature of privacy with frightening prescience. 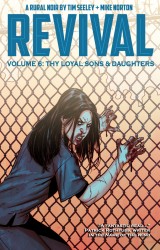 For one day in rural central Wisconsin, the dead came back to life. Now it’s up to Officer Dana Cypress to deal with the media scrutiny, religious zealots, and government quarantine that has come with them. Her sister, Em, is on the hunt for the murderer of her friend, while Dana tries to prevent her from revealing herself to the world and being confined to a new concentration camp for the recently revived. The hit series created by New York Times bestselling author TIM SEELEY and Eisner Award-winning artist MIKE NORTON is collected with bonus material! 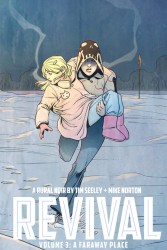 For one day in rural central Wisconsin, the dead came back to life. Now, it’s up to Officer Dana Cypress to deal with the media scrutiny, religious zealots, and government quarantine that has come with them. In a town where the living have to learn to deal with those who are supposed to be dead, Officer Cypress must solve a brutal murder, and everyone, alive or undead, is a suspect. The sell-out hit series created by New York Times Bestselling author Tim Seeley and Eisner-winning artist Mike Norton is collected in this oversized hardcover featuring Revival #24-35, plus many behind-the-scenes bonuses and other features. 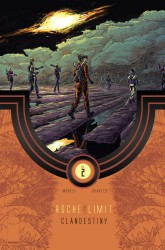 The bestselling, critically acclaimed sci-fi series returns! It’s 75 years after the events that left the Roche Limit colony in flames. When a crew of military and science personnel are sent to the forgotten and desolate planet on a mysterious expedition, they quickly learn its dark secrets—and that their mission is not what they thought it to be. With danger lurking all around, the crew members fight to find a way off the planet and resist the mysterious presence that haunts them all. 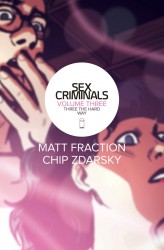 As seen on LATE NIGHT WITH SETH MEYERS! The Eisner- and Harvey-award winning raucous sex comedy that Time magazine called the Comic of the Year and Apple called “inappropriate for sale on iOS devices” returns in SEX CRIMINALS V3: THREE THE HARD WAY. So it turns out Jon and Suzie aren’t alone—other people around the world, like them, freeze time when they climax. A self-appointed group wants to regulate and control them through fear and intimidation. Jon and Suzie are falling in love and want their freak flags to fly, but if they’re going to fight back they can’t do it alone. And really, isn’t that a metaphor for the whole series? That we might all be alone but we’re all alone together? I think so. If you read only one comic with a semen-demon in it this year, please make it SEX CRIMINALS V3: THREE THE HARD WAY.

“I wouldn’t trust most comic creators to turn a sexual awakening into compelling pulp fiction, but Fraction and Zdarsky pull it off masterfully.” -Paste Magazine 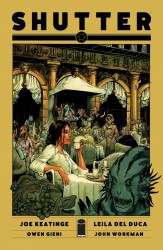 Kate Kristopher was a globally renowned explorer on an Earth far more fantastic than our own. Then she wasn’t. In our third volume, Kate’s memory has been wiped by the organization manipulating her entire life. Those she hold close all walk to their execution. All roads lead to Leonis. 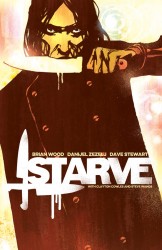 Once the world’s most famous chef, Gavin Cruikshank’s been in a self-imposed exile for years. His little foodie television program has since evolved into STARVE, an arena sport that pits chef against chef for the pleasure of their super-rich patrons. It’s a stain on a once-noble profession, and Chef Gavin is ready to go to war to stop it. Two things stand in his way: his arch rival Roman Algiers, and his adult daughter Angie, who probably just wants her dad back and acting normal. 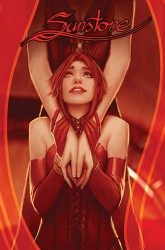 Meet a girl online: check!
Befriend and flirt for two months online: check!
Know her in person for two weeks: check!
Move in together!
Well…this can only end well!
This is the big one, people! In fact, it’s so big we had to up the page count! 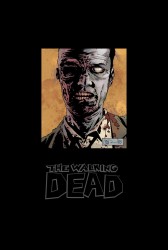 This deluxe hardcover features 24 issues of the hit series, THE WALKING DEAD, along with the covers for the issues all in one massive, oversized slipcase volume.

WHERE IS JAKE ELLIS? TP 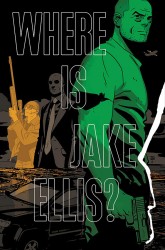 Jon Moore and Jake Ellis are back. The sequel to the Eisner-nominated WHO IS JAKE ELLIS? finds the American spy now without his invisible guide, but their enemies are still after them. Where is Jake, and will Jon find him in time to stop The Facility from furthering their designs?

Collects WHERE IS JAKE ELLIS? #1-5