Red Sonja continues her defense of the Library and even uses some of the knowledge she gains from the books to influence her defensive strategy. Will she be able to survive the Empress Dowager’s Vipers or will the Library finally be put to the torch? How does it fare?

Gail Simone begins [easyazon_link identifier=”B014DSK6F8″ locale=”US” tag=”bounintocomi-20″]Red Sonja #18[/easyazon_link] with a parable from one of the books found in the library. It is an excellent use of foreshadowing as Simone depicts a young girl facing nigh impossible odds; yet, she is able to use her wits to overcome those odds. It unveils a different path that Red Sonja can take, one that does not involve always using violence and force to solve her problems.

Despite this new avenue, Sonja still relies on her most valuable asset: swordplay to solve most of her problems. The first being Thruck the Fierce, the unruly bar patron from the previous issue. However, the violence seems completely unnecessary. Thruck has done nothing to provoke Sonja besides some gloating. Instead, Thruck actually informs her of impending danger. Sonja responds to this news by killing the man.

Simone does use Thruck effectively to introduce the larger villains known as the Vipers and informs us of the pleasure they take in their business and their method of inflicting pain. There is also a sense of desperation and urgency. Simone is able to convey a sense of hopelessness emanating from Sonja, but it is mixed in with resolve and determination. It is a very grounded approach that shows a different side to Sonja’s usual bravado.

While the fight sequence was very exciting, I was disappointed that Simone used the same tactic of feigning defeat twice. Once made sense, but twice was a little much. It was also a little frustrating seeing the amount of time pass with the Empress Dowager just sitting on her laurels until Sonja visits her. It shows a real lack of depth to the villains where they are reacting to Sonja’s actions instead of taking their own initiative. 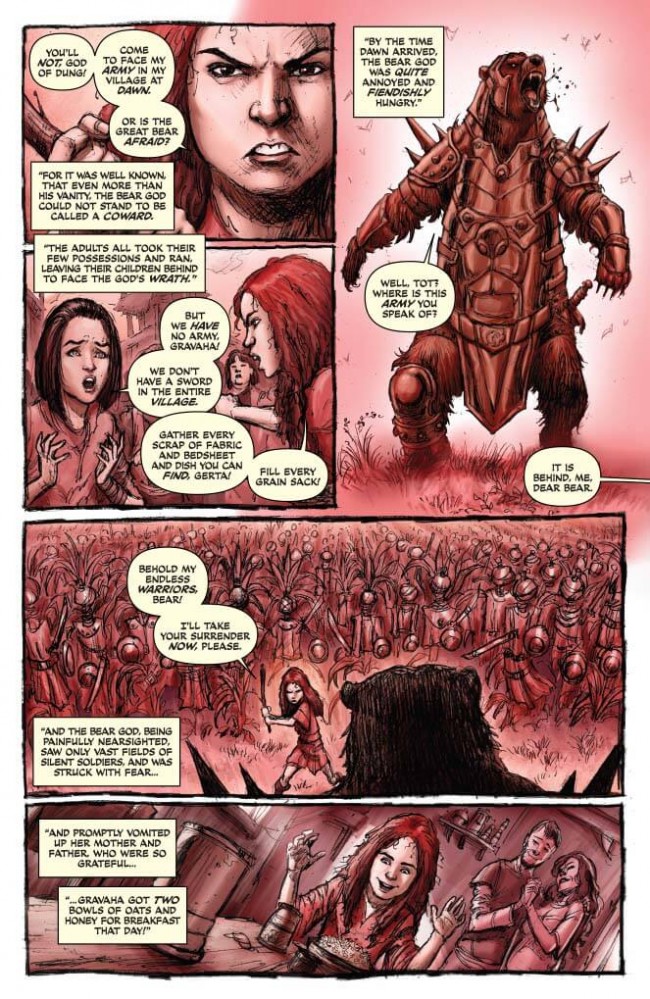 Walter Geovani’s artwork is really good and to show off his talent he uses two very distinct styles. The first style is a lot rougher than the second. The pencil lines are very distinct whether through his shadowing or adding detail to the world, such as a field of scarecrows or the rusting of a cup. This rougher style easily allows you to differentiate that this story is being read to Sonja.

The second style is what you come to expect from the Red Sonja with cleaner, more controlled lines. There is a really awesome splash page with Sonja front and center and the Vipers in the background. Geovani not only captures Sonja’s battle fury, but also the looks of shock on the Vipers.

The action flows very well. The way he lays out the panels in the beginning of the action scene using two horizontally slanted panels above four vertically slanted panels quickens the pace and ups the drama and tension. There are times where you have to suspend your disbelief when Sonja performs a counterattack. I actually found myself turning back to see if I had missed something because it was unclear how she recovered from an extremely vulnerable position.

Vinicius Andrade’s colors complement Geovani’s artwork well. He uses a nice faded red in the beginning to emphasize this part of the book is different from the rest of the issue. He uses a number of different shades of red to highlight certain action sequences and their aftermath. It helps show Sonja’s fury during the action sequences, but also gives her a kind of majestic godly glow afterwards. 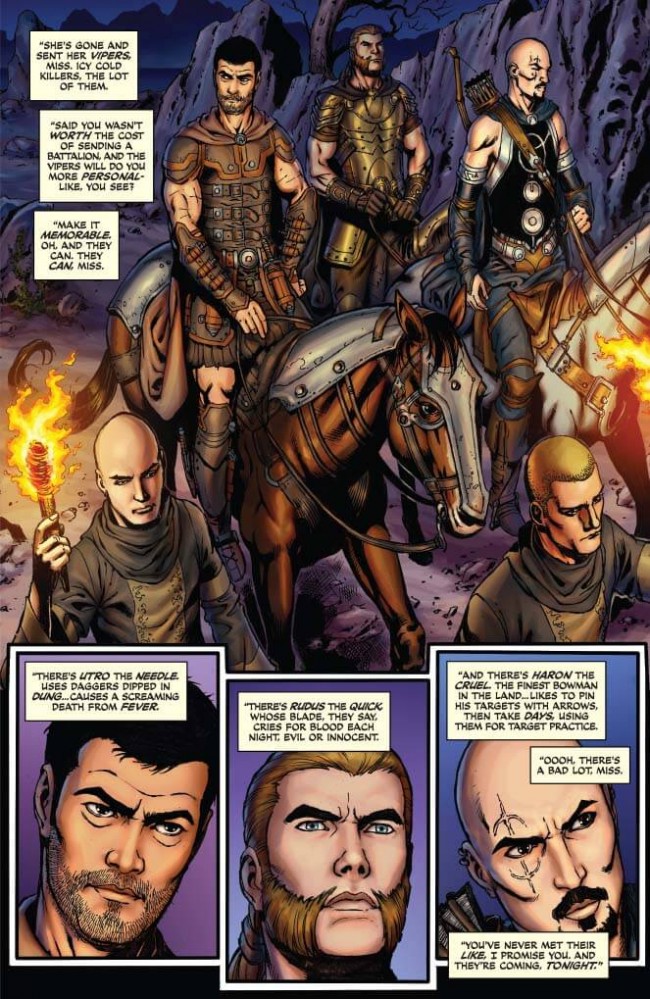 [easyazon_link identifier=”B014DSK6F8″ locale=”US” tag=”bounintocomi-20″]Red Sonja #18[/easyazon_link] is a decent follow-up story to the previous issue that appears to wrap up the story arc. There is some really good writing here, using the story in the beginning to foreshadow Sonja’s own strategy later on. However, there are some slip ups with the large time gap between the battle and Sonja’s encounter with the Dowager Empress. There is also a little too much reliance on feigning defeat in the action sequences.

Geovani’s artwork is done well and he uses two distinct styles to show off his talent, one a much rougher look compared to the other. He uses some nice panel layouts for the combat sequences that heighten the tension. Nevertheless, there are times you have to suspend your disbelief a little more than necessary to figure out how Sonja gets out of certain situations.