Peter Stanchek goes out to defend Earth from the incoming onslaught of the Harada Mind and finds himself mentally assaulted with the deaths of his former companions, the renegades. How does it fare?

Joshua Dysart tells a truly compelling and emotional story in [easyazon_link identifier=”B014WIGKMC” locale=”US” tag=”bounintocomi-20″]Book of Death: The Fall of Harbinger #1[/easyazon_link] that wrenches and pulls at your heartstrings. The return of the Harada Mind sets up a world-ending catastrophe, but the plot that drives the story is overshadowed by Dysart’s focus on the characters of Peter Stanchek and Toyo Harada.

That isn’t to say the plot isn’t good, because it is. Dysart is able to give a glimpse of what the Harbinger Foundation and the perfection of Harada looks like, but also how a supremely, external conflict can throw all of the perfection to the wayside.

But let’s get back to Dysart’s characterization of Stanchek. He is able to show Stanchek’s ideals and sympathy when confronting Harada before he leaves Earth and then to transition into a display of pure power and strength as he brings order to the Chamber of the Global Congress. Where Dysart really explores his character, is during his flight to confront the Harada Mind. 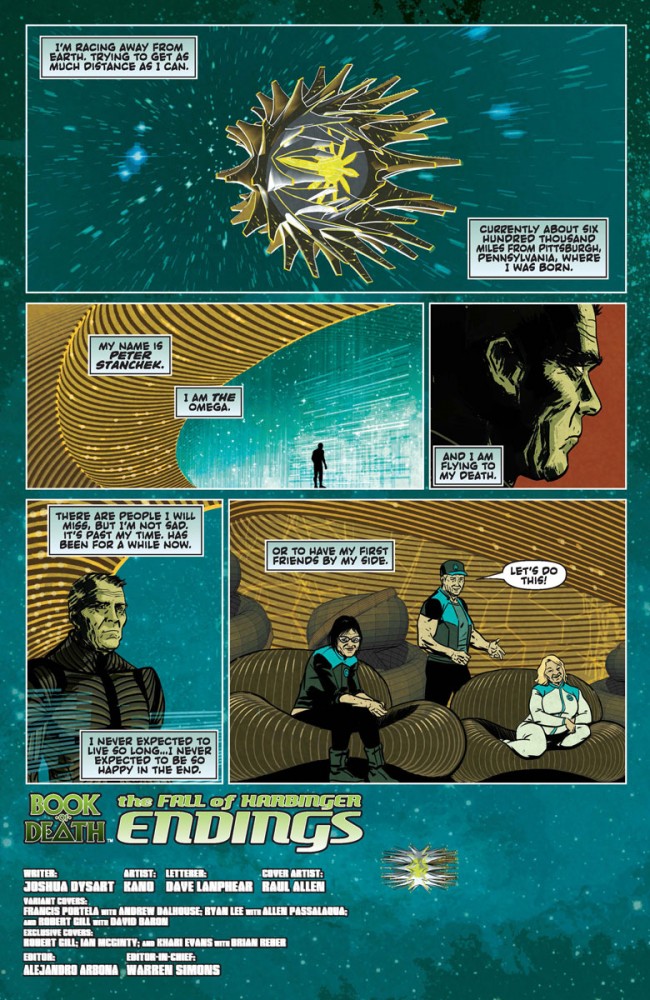 Dysart delves into Stanchek’s memories of his teammates: the good, the bad, and the ugly. He imagines what they would be like if they were with him today as well as the last words he would tell them if they were with him at the end of the world. It becomes truly heart wrenching as his visions of happiness are torn away from him and he is forced to relive the deaths of his friends.

Outside of the heavy character work Dysart performs, he also examines time and space and opens the door for multiple universes within the Valiant universe. However, as he opens this door he also leaves the ending of the story somewhat ambiguous despite the insistence on finality. He also looks at death and how it may be catastrophic, but it can also lead to rebirth, growth, and greater knowledge.

Kano’s artwork is absolutely stunning, especially during the battle sequence between the Harada Mind and Stanchek and a third-party guest. The colors he uses are magical. It gives the idea that the battle taking place is beyond the ordinary human mind. It is a clash between gods. 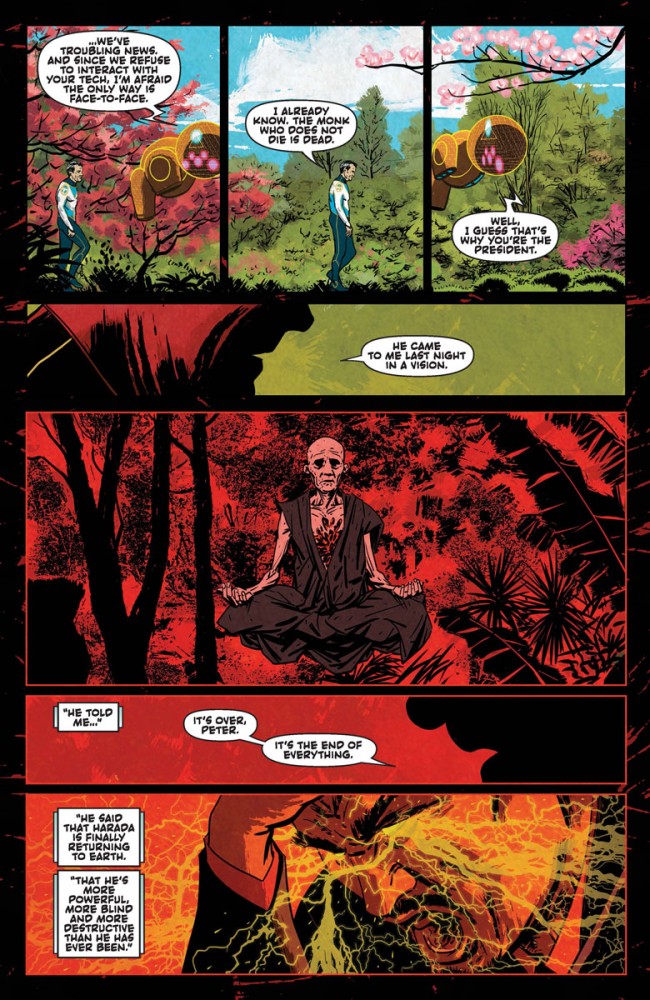 He also effectively uses his color palette to signify death. Kano uses a red background, not only when he draws Stanchek’s memories of his fallen renegades, but also the death of other characters.

The aesthetic Kano uses to depict the future feels heavily influenced by the 70s and 80s especially with the furniture the characters use, although the buildings look like something designed from the 50s. They may have that past feeling, but it also exudes a sense of the future with the sleek curves of the buildings and furniture.

The layouts are done very well. It is very easy to read and follow where the action and story is flowing. Even when he uses fourteen panels on one page, it is set up in a way to allow the reader’s eye to flow down and across the page. 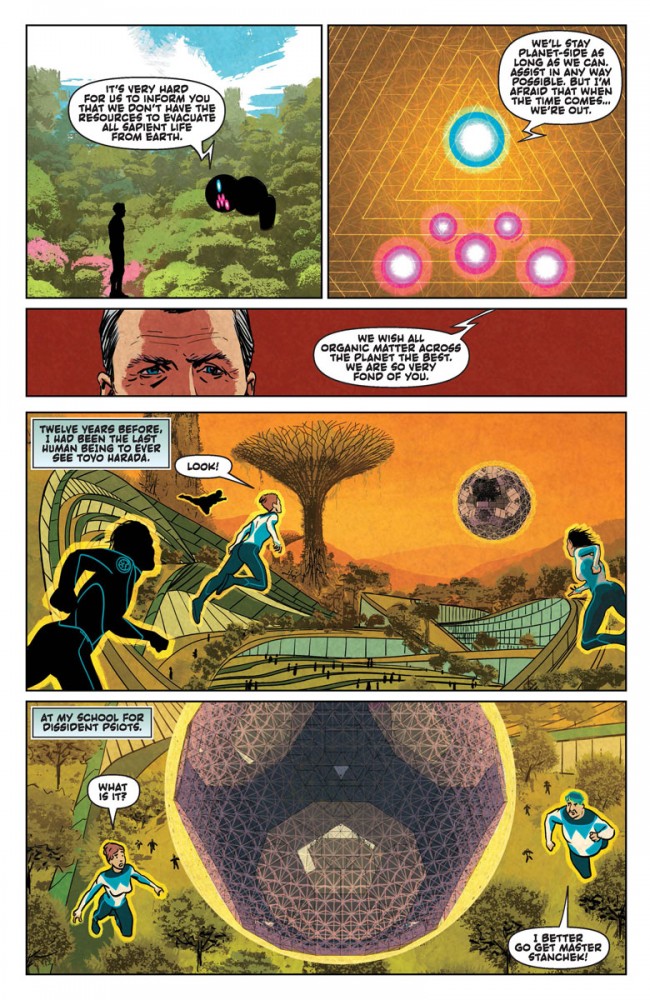 [easyazon_link identifier=”B014WIGKMC” locale=”US” tag=”bounintocomi-20″]Book of Death: The Fall of Harbinger #1[/easyazon_link] is a heavily character-driven book that looks at both Peter Stanchek and Toyo Harada. However, the beauty of Dysart’s writing allows him to incorporate larger concepts such as death and rebirth and multiple dimensions as well. Kano provides solid artwork from the layouts to the world design to the action sequence that brings out the conflict in Stanchek’s mind as well as the actual physical threat of the Harada Mind. Book of Death: The Fall of Harbinger #1 is one you can’t miss with excellent storytelling and artwork.