Editor’s note: The page numbers were changed to reflect actual story pages. Jem and the Holograms #7 was used as the typical Jem comic. You are still paying more for the Annual although it is a negligible increase of about a penny per page. In light of our horrible arithmetic, The Verdict section has also been updated.

Jem and the Holograms celebrate their [easyazon_link identifier=”B014TMFVJY” locale=”US” tag=”bounintocomi-20″]first Outrageous Annual special[/easyazon_link] with 48 pages and four short stories focusing on each of our Singing and Kicking heroines. But is the show great enough to justify the $8 ticket price? How does it fare?

The Jem and the Holograms Outrageous Annual is my first Jem experience, aside from seeing the show a few times as a kid, and frankly while I can’t pretend I was a fan of it, I was still curious to discover the IDW comic as I had heard great things about it. If this is your first Jem as well, the basic gist is that Jerrica and her friends (Kimberly, Aja and Shana) become a “super pop band” Jem and the Holograms with the aid of a holographic super computer named Synergy. If you know this, you’re good to go.

While the first page index lists six stories, “Previously” is actually a one page drawing that does not tell you much, drawn by the insanely talented regular artist Sophie Campbell, unfortunately otherwise absent from this book. “Wired” is not a story in itself but only serves as setting the context for the other ones. Every story is written by Kelly Thompson, the regular writer for the Jem series.

“Wired,” drawn by Amy Mebberson, sees the band after a particularly good but also exhausting concert. The girls decide to watch a movie in order to relax but fight over what movie they should watch (Synergy can access, probably illegally, every movie in the world), as each girl has a different favorite genre. It doesn’t matter anyway as a whole six minutes later each of them is snoring adorably (really, it says “adorable snoring” as a sound effect). The art is average but as nothing of importance is happening and it’s only three pages long, it does not matter much. It’s unfortunate, however, as the cover Mebberson drew shows she can do much better than those interior pages. 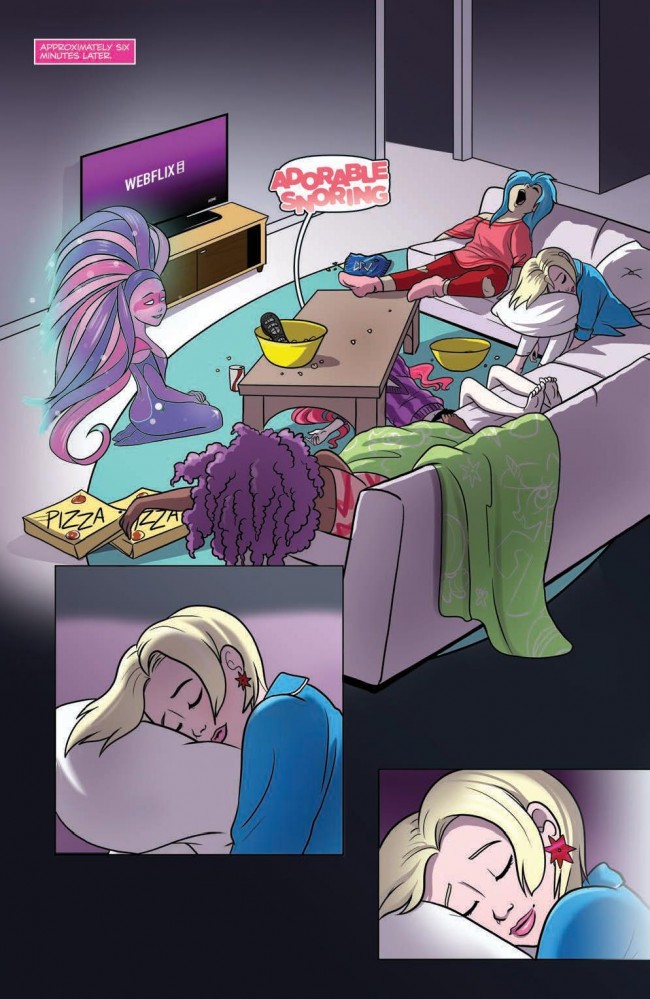 “Jem Wolf” focuses, as you guessed, on Jerrica/Jem. The story imagines Jerrica as a basketball player who turns into a Jem-werewolf. It appears her werewolf incarnation is much more popular than the “real” Jerrica, and all her friends or, really, everybody wants her to be the wolf all the time. This story is a bit obvious, Jem struggles with her double persona and wishes people would like her instead of her alter-ego, so we basically end up with a Hanna Montana story instead of a werewolf story. I have a few issues with the artwork by Arielle Jovellanos (the eyes make every character look like they are on drugs) but the facial expressions are great, and the colors by Josh Burcham work great.The story has a surprisingly downer ending, if, really, you can call it an ending. But more on that later.

“Angry Aja” is the superior story in the book and also has the better art by Rebekah Isaacs. It takes place in a Mad-Max like wasteland universe and sees Aja, short on gasoline, venturing into a strange town where a masked thief takes her guitar. She fights the thief but fighting is forbidden in this town. So she ends up in…. A Battle Dome (In a town where fighting is forbidden. Okay that part was a bit stupid). I will not tell you about the resolution but let’s just say the story deals with similar thematics as the first one but much better. You’re introduced to a kid character who’s immediately likeable and the story sees a lot going on in the nine pages it gets. As I said the art looks great, it’s lively and mature, and it’s complemented by great colors from Joana Lafuente.

“Shana Wars” serves as a very average homage to Star Wars. Shana ends up in the swamp scene and Synergy serves the role of Yoda. I wish I could tell you more about this story but there does not seem to be a story, if all you saw of Star Wars was the swamp training scene without context or conclusion after that, well you would not really care either. Shana has to train for an unclear reason, has an unclear revelation and goes away. The art by Jen Bartel has a bit of an 80s feel to it, not my personal taste but not bad either. 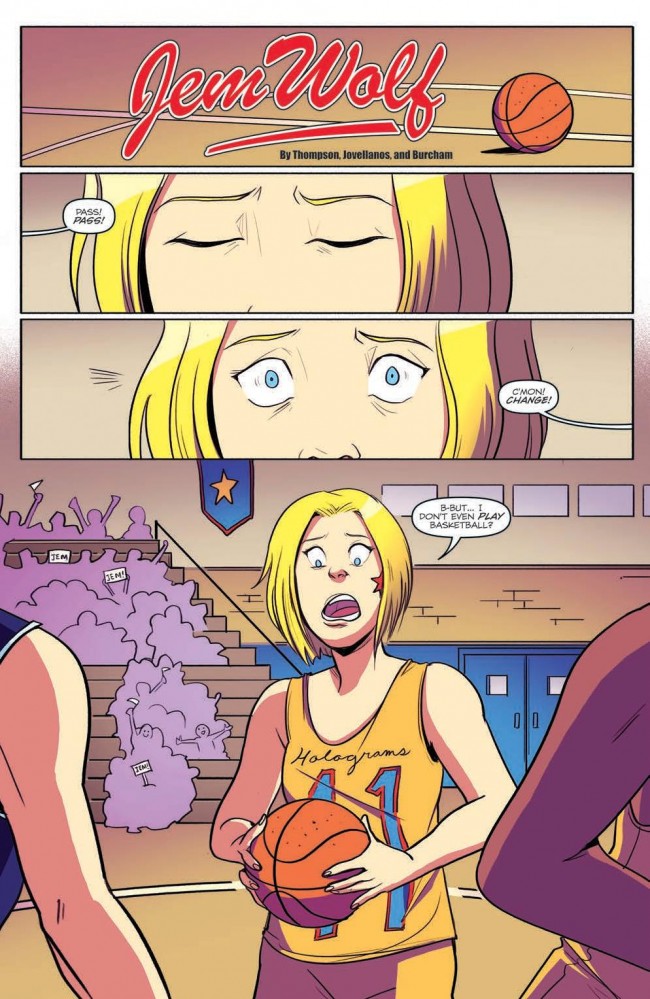 Finally, “Jem Babies” is reminiscent of what Skottie Young does with his Marvel Babies, this story is not much but as you would expect it is a lot of fun, as the Holograms and the Misfits (their rival and, let’s face it, much cooler band) adopt a kitten and write it a song, together. The art by Agnes Barowska is absolutely adorable, and strangely, it is the only story that has anything to do with singing. Also strangely, the only one to feature the Misfits.

Now here’s the thing that bothers me. Two of those stories, “Jem Wolf” and “Shana Wars” have no conclusion to speak of. And at the end of “Shana Wars” Synergy-Yoda says Shana will be back. Now my worry is that those stories will be continued in the Holiday Special that will be out in a few months. I hope I am wrong as that would be pretty sketchy, (Editors Note: Kelly Thompson has reached out to us and informed us these stories are unrelated to the Holiday Special) in any case as it stands those two stories prove to be very frustrating for the reader who would be right to expect four full stories after spending $8 on this book. 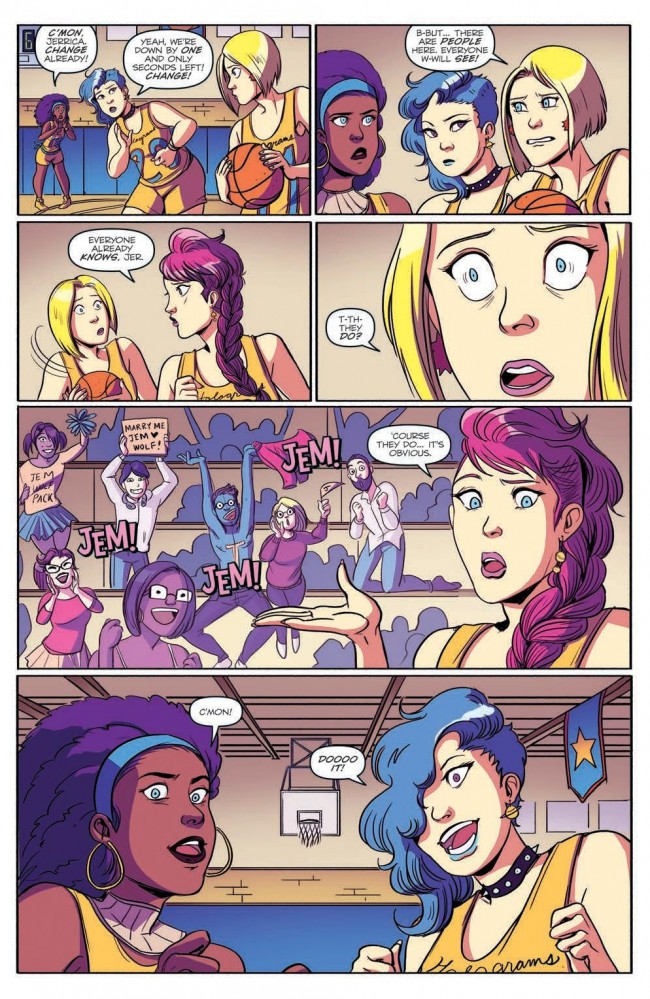 Unless you’re a big fan of Jem, you can pass on [easyazon_link identifier=”B015YH1MA0″ locale=”US” tag=”bounintocomi-20″]this book[/easyazon_link]. It would be okay with a 4 or maybe $5 cover price but consider this : A usual Jem comic is $4 for 22 pages, this one is $8 for 42 pages. So the price per page is actually raised, and the quality of the stories, despite one that is pretty great, just can’t justify it.