Denis Bajram is a mad-man. Over the course of eight years he must have dedicated an insane amount of time to being the sole writer and artist of the [easyazon_link identifier=”0785132384″ locale=”US” tag=”bounintocomi-20″]Universal War One[/easyazon_link]. The series is very lengthy, comprised of around 300 dense pages, often featuring numerous detailed panels. But even more impressive and (likely) time consuming is the complex and exceptional science-fiction story he crafted that these panels depict. How does it fare?

With Universal War One, Bajram has somehow manages to create an easily approachable, yet complex epic. He demonstrates mastery over sci-fi concepts in a refreshing way. Rather than letting things like time-travel or space-faring technology obscure his story, they enrich it. With the exception of the off-the-rails ending, the results of these concepts are more grounded here than they are in other works of science-fiction. Tired tropes like causation-paradoxes and quantum-mechanical malarkey are replaced with more muted plot-devices. They may not be as grandiose as their popular counterparts, but they make for a much more relatable story.

And while it’s easy to spend a lot of time marveling at UW1’s unique use of these things, even more can be said about the series’ characters. Sci-fi stereotypes are almost entirely relegated to supporting characters. Instead, the focus is on “Purgatory Squadron,” a group of pilots tasked with unusual and dangerous missions.

From the outset it’s clear that something isn’t quite right about these pilots. They don’t seem to fit in with their highly-ordered military surroundings. The characters almost immediately find themselves disobeying orders, behaving cowardly, displaying an utter lack of professionalism, and even giving into violent impulses. The more we peer into the lives of Purgatory Squadron the darker things get. It culminates into one of the most effective plot-twists in the series, occurring at the end of volume one. 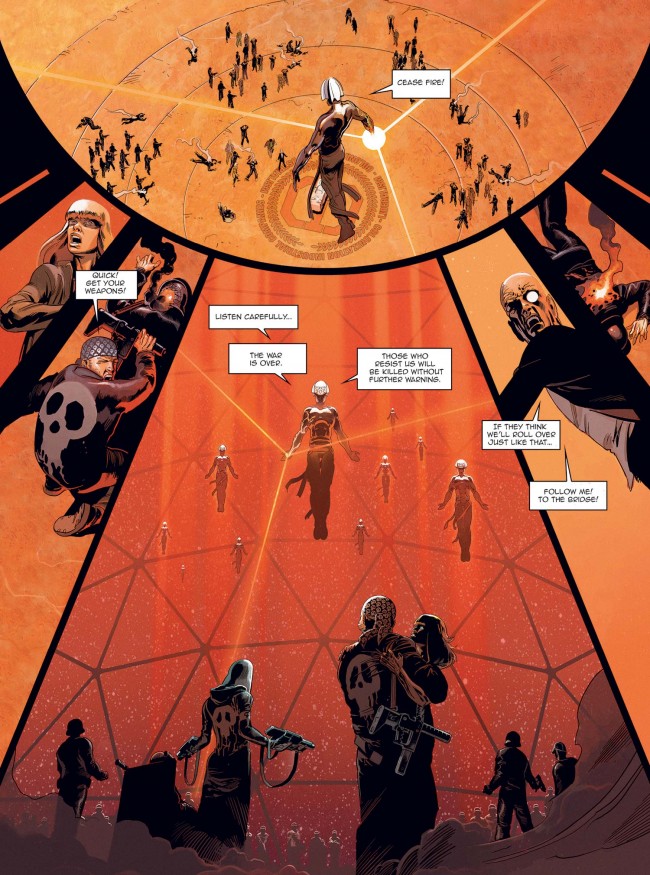 This twist is also a perfect example of how UW1 being a one-man-show greatly benefits it. Bajram’s insights into the characters he has created allows him to be extraordinarily effective at bringing the reader into the story. When the plot-twist in question occurs after a horrible act of depravity, the colors shift from simply reflecting their environment to reflecting the feelings of the characters. The drawings slowly begin to be framed at strange angles, and colors progressively blur together. Focusing in on the characters’ facial expressions at this point creates an uneasy feeling, and one imagines that the pit they feel in their stomach must be very similar to the one the characters must be feeling in the panels.

It’s fitting that the best of the many plot-twists in UW1 revolves around characterization, rather than something more typical of sci-fi. As I’ve said, the sci-fi elements are great. But what makes UW1 truly special is it’s unique characters, and the unique situations that can be created by them.

Unfortunately this moment of brilliance comes at the expense of a rather dull first volume, but it’s worth the wait. The high-concept behind Purgatory Squadron is probably the most ingenious thing about UW1 – a series full of ingenious things. But to get there we have to slog through around 50 pages of mostly dull scenes, establishing the series setting and Purgatory’s mission. 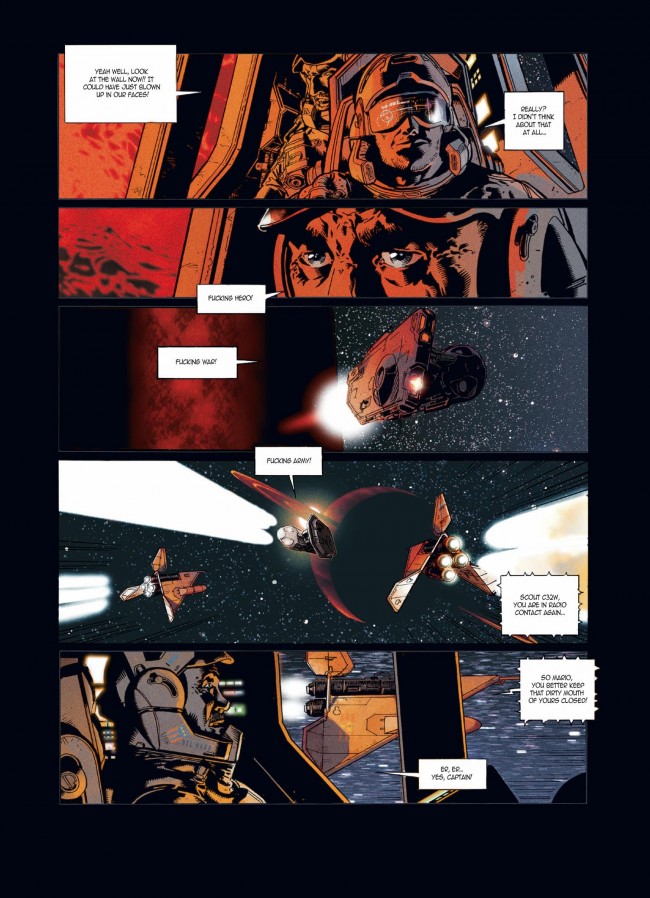 But once the twist hits, you feel it. It completely changes the way you view the past events, and sets the tone for the upcoming action.

After the first volume the action never really stops. A vast array of character conflicts and intriguing plot-developments occur at a breakneck pace. It can be a bit much to take in at times, and readers may need to re-read panels to keep up. But it’s ultimately worth it, as UW1 contains a ton of plot, even for it’s length.

And despite it’s length, Titan’s single trade release is probably the best format to read UW1. This is partly due to the French convention of having very long issues (called “volumes” in this release), but also because the series reads more like a single novel with a short sequel tacked onto the end. In this sense, it’s reminiscent of Babylon 5 and Battlestar Galactica, both in style and quality.

I don’t make such a comparison lightly, either. Battlestar Galactica is, in my opinion, the best science-fiction series in history. But the first five volumes of UW1 deserve a spot alongside it for it’s originality, characterization, and interesting plot. In fact, it’s easy to imagine that a lot of things in Battlestar Galactica were heavily influenced by UW1, such as its futuristic but stark military aesthetics, and couching its story in a religious text of questionable authenticity. Meanwhile, in Bajram’s work the influences of Star Trek: The Next Generation, Dune, and other greats are apparent. 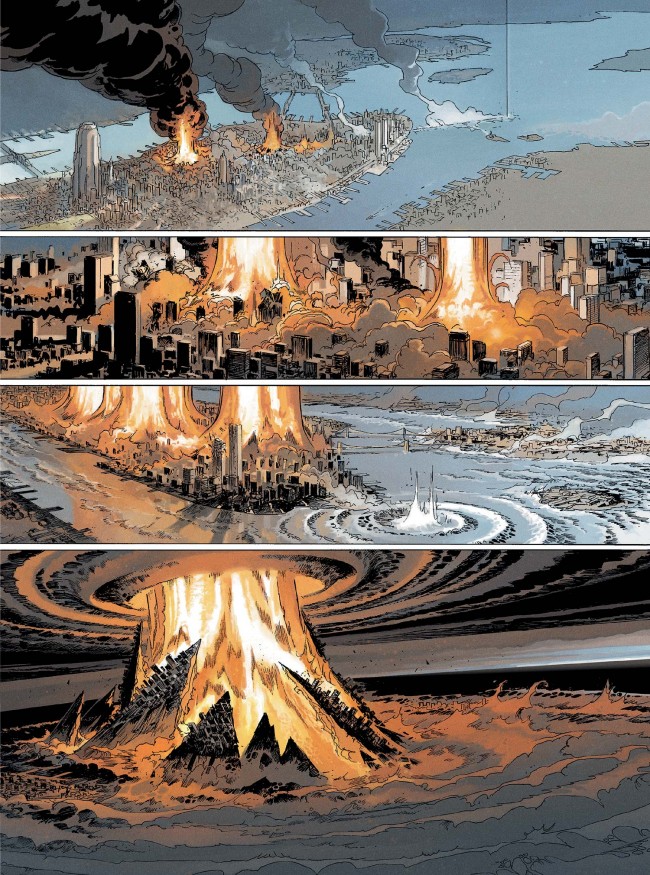 It is worth repeating, however, that despite the clear influences exerted by and on UW1, it remains incredibly unique. Purgatory Squadron itself is enough to distinguish it from other series, but it’s clever use of sci-fi tropes elevates it even further.

The only major drawback is the final volume, which features a major shift in tone and, I would argue, quality. It’s still good, and if it weren’t part of such an excellent series it would be considered serviceable. But it smacks of deus-ex-machina, and feels very out of place.

Denis Bajram has crafted a science-fiction masterpiece. Featuring many unique concepts, excellent characterization, and unique uses of sci-fi conventions, UW1 distinguishes itself as arguably the best graphic novel of it’s kind, and certainly the most unique. The dense plot can be a bit hard to follow at times. That, combined with a somewhat dull first volume, and an out-of-place final volume, are the only real drawbacks.