The events of the previous issue are revealed, but not before a little bit of Driver’s history is disclosed, including his first day in Los Angeles and his motivation to travel to the City of Angels. How does it fare?

Michael Benedetto catches you a little off guard in the beginning of [easyazon_link identifier=”B015GE8HFO” locale=”US” tag=”bounintocomi-20″]Drive #2[/easyazon_link]. In the previous book, he left us with Driver performing getaway duties after a big job went south. However, on the first page of this issue, we find a young Driver brand new to LA.

Benedetto details how Driver gets his start in LA and it seems he is trying to reinforce Driver’s confidence and self-worth. However, it comes off as unnecessary back story that doesn’t really add anything to the character that we didn’t already know from the first issue.

One of the biggest problems with this issue is its lack of continuity with the first issue. For example, in the first issue Driver’s neighbor had just moved in and invited him to stop by her apartment. However, in this issue it is Driver who is just moving into his apartment and the same neighbor, or at least an identical twin, is offering him assistance moving in.

The neighbor also throws a wrench into Driver’s connection to Cook. It seems that Driver has met Cook before, although Benedetto led you to believe in the first issue he had just met Cook and identified him by the way he carried and dressed himself. The continuity issues make it very confusing to follow and you might end up doing a lot of head scratching. 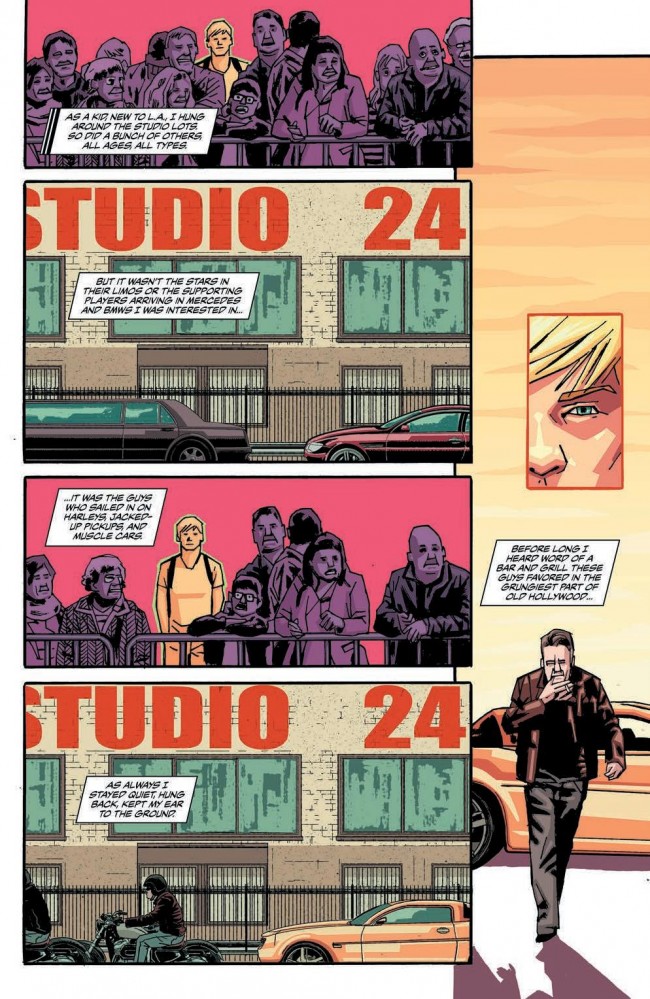 Benedetto also provides a traumatic early-life experience. However, the way he sets it is up, will have you suspending your disbelief because Driver begins telling an extremely haunting personal story to his neighbor he just met a few minutes ago! The personal story is emotionally moving and has quite a bit of shock factor to it. It is also nice to see how he found his passion despite his family drama.

The final action sequence is well-scripted and flows nicely; it actually fits into the continuity of the first issue. Antonio Fuso’s layouts drive the action, creating quite a bit of tension and suspense even with knowing the eventual outcome of the fight due to the first issue.

Fuso excels at drawing the vehicles. Driver’s foster parent’s Galaxie is absolutely gorgeous and reminds me of my Uncle’s ’64. The grill is iconic and he nails it. Not only does he nail the exteriors, but he also does a good job of displaying what’s under the hood.

However, he still struggles with depicting blood gushing out of people’s bodies. It looks more like someone threw Jell-O on top of the guy instead of a victim suffering from a gunshot wound. There is also a scene where Driver is on the couch enjoying some beers. Two or three cans are just lying on top of him; they just seem completely out of place and were really distracting. 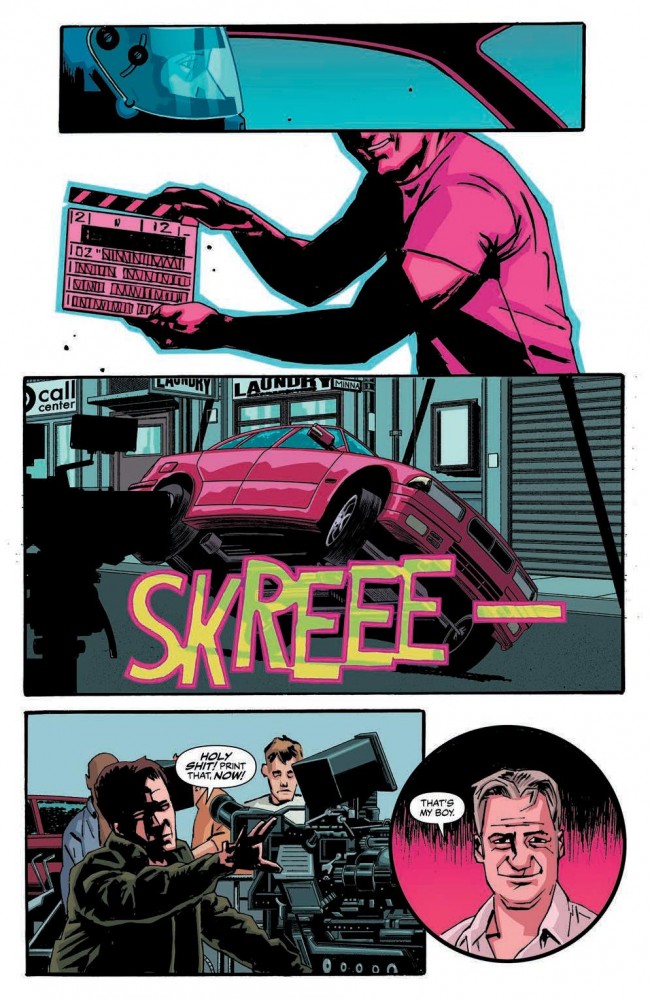 Emilio Lecce’s inks bring out the detail of the vehicles. There is one panel where you can see the treads of Driver’s tires.

Finally, Jason Lewis’ colors keep each page very fresh. At points, he uses a filter to display what is happening occurred in the past; however, this is not consistent throughout the entire issue. He also contrasts the scenes where Driver is on a movie set to when he is at his apartment or driving the get-away car. The former is much brighter with blues, while the other is seedier with muted greens and oranges.

[easyazon_link identifier=”B015GE8HFO” locale=”US” tag=”bounintocomi-20″]Drive #2[/easyazon_link] is a bumpy ride with lots of continuity issues that don’t add up. It really makes it quite difficult to grasp what exactly is happening and who is who. The artwork struggled with gunshot wounds and ill-placed beer cans, but the action sequence was exciting with lots of tension. There is quite a lot of room for improvement and this second issue was a little bit of a let down from the first installment.