The Action Scientists have rescued Atomic Robo, but he has been severely damaged and is currently just a head. The team plans a mission to reassemble Robo that leads them to the Black Market. Meanwhile, ULTRA forces attempt to prepare the Titans to defend against the impending Biomega threat. How does it fare?

[easyazon_link identifier=”B014ZKOMKY” locale=”US” tag=”bounintocomi-20″]Atomic Robo: The Ring of Fire #2[/easyazon_link] is very focused on character interaction and team building and forgoes the action until the last pages. The Action Scientists pitch ideas to each other and in their interaction you get a better sense of who they are and the roles they play within the team. For instance, Bernie is a little too worrisome for his own good and plays a bit of the comic relief character which really shows up when the secret identities he creates for the team are revealed.

Writer Brian Clevinger does repeat quite a bit of information from the previous issue such as who ULTRA is and how they are run through the NSA. He also reiterates the threat of the Biomegas. However, unlike the last issue where it seemed a disparate part of the story unrelated to the Action Scientists and Atomic Robo, he is able to weave them together and connect them to each other. He also explains what a Biomega is and how they operate. This adds to the enormity of the situation that is about to affect the Action Scientists. It also shows the desperation ULTRA has in finding a way, whatever it is, to defeat the Biomegas. We also get our first image of what one looks like (at least for readers who have never picked up Atomic Robo before this series).

The way Clevinger delivers the exposition is fluid. The Action Scientists are relaying information to Atomic Robo and catching him up on what has happened with regards to Majestic (now, ULTRA) and how many of the former team members have survived. It flows very well as the information being relayed moves the team into discussing new alternatives and their plan moving forward. 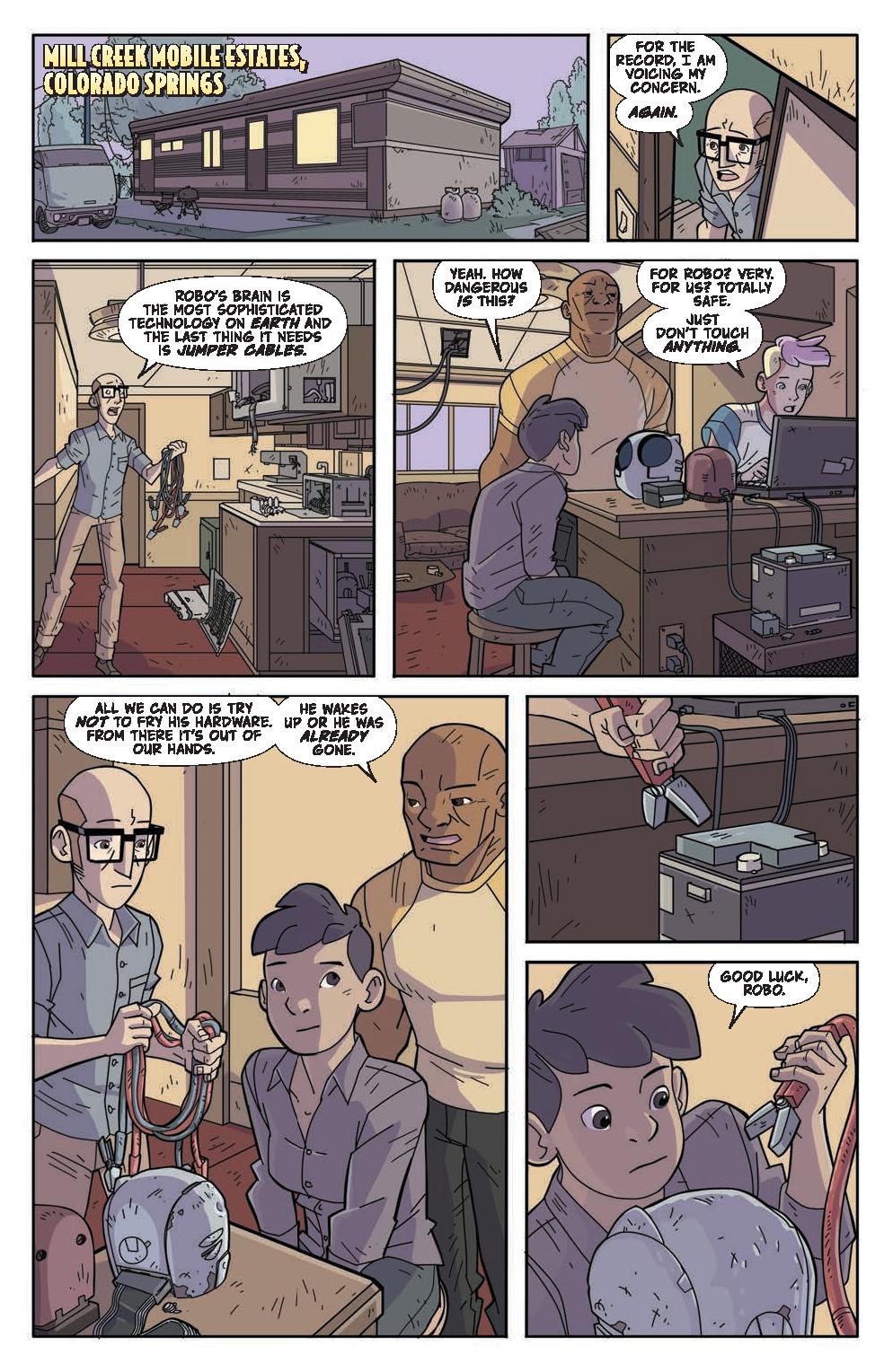 Clevinger’s writing really shines during the final third of the book. He is able to create a sense of apprehension, a wave of relief, utter shock and dismay, revelation and enlightenment, and finally chaos and confusion all in a matter of a few pages.

Scott Wegener’s artwork is solid. We get to see some of his creativity on display as he shows us a Biomega and the devastation it can cause. Probably my favorite piece that he depicts is his reimagining of Atomic Robo. It is quite hilarious how the Action Scientist team reassembles him.

Wegener also does a really good job of showcasing and designing more of the world. The team arrives on a huge cargo ship in the middle of the Disputed Zone in the South China Sea. The ship reminds me a lot of the small towns in Borderlands 2 where you can go and shop at a variety of different places and they are all offering some kind of weapon or weapon upgrade. It adds to the dystopian nature of the world.

Wegener still does not add any depictions onto the computer screens. Instead they are just blank screens. It lacks the extra detail that can put his artwork over the top. 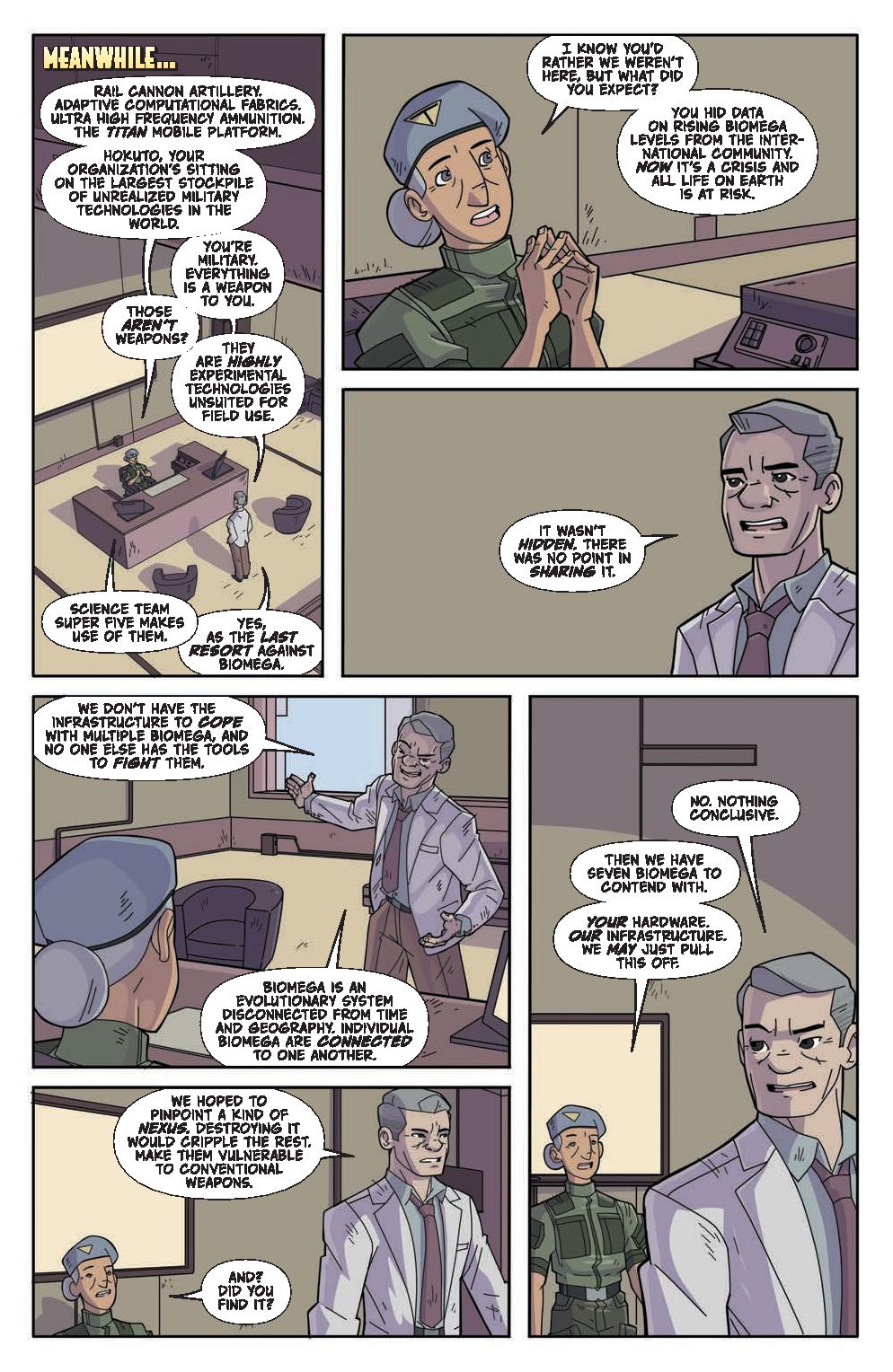 [easyazon_link identifier=”B014ZKOMKY” locale=”US” tag=”bounintocomi-20″]Atomic Robo: The Ring of Fire #2[/easyazon_link] is a fun, humorous sci-fi adventure that really sets the stage for the upcoming issues and focuses on the family/team aspect of the Action Scientists. Clevinger reinforces certain aspects of the story through slick exposition and introduces a larger threat that will most likely require the teamwork of the Action Scientists and Atomic Robo to defeat. The foreshadowing is done very well and sets up the reader to expect some huge action sequences. Wegener’s artwork is solid minus a lack of detail on the laptops. His reimagining of Atomic Robo is downright funny!