Harada and the Foundation have outmaneuvered Rising Spirit and now aim to show the world how far they are willing to go to ensure world peace, cure disease, and end poverty. Harada launches a multi-pronged strike against the world’s greatest powers while the Vine conspires to bring Harada down. How does it fare?

[easyazon_link identifier=”B01577IO12″ locale=”US” tag=”bounintocomi-20″]Imperium #9[/easyazon_link] is the beginning of a new arc, “The Vine Imperative.” It is a great jumping-on point for new readers and I don’t say this lightly. Valiant excels at being new-reader friendly with their arcs. They are all very self-contained; however, they are able to connect with the previous stories as well.

That being said, Imperium #9 sets the stage for the “The Vine Imperative,” something that is only hinted at and never really fleshed out. It still remains a mystery as to what it is except its end goal is to destroy Harada. Instead, writer Joshua Dysart explores more of Harada’s ideology and the methods he uses to pursue his vision.

Harada’s ideology is explored through a television broadcast to the world where he states he is taking action on these three targets because “the cost of human life in defense of these war machines is regrettable.” Yet, Dysart crafts the story in such a way to fully expose Harada’s hypocrisy. He intertwines the actions of his team with Harada’s television broadcast. In order to save lives, Harada brutally eliminates others. 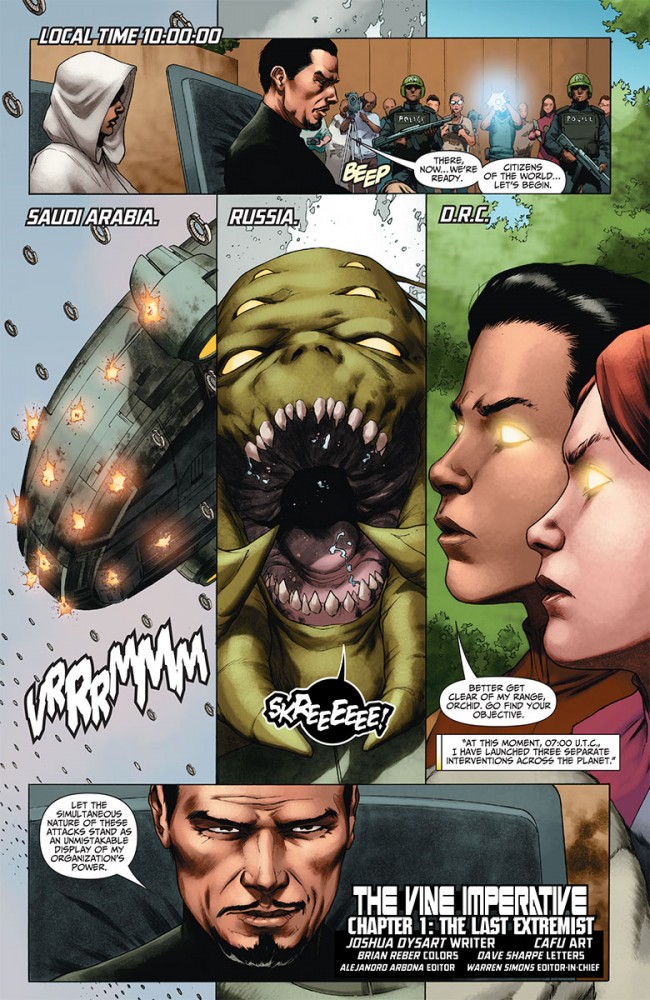 Dysart also explores Harada’s character and ideology in a discussion with Ingrid Hillcraft, counsel to Harada and the Foundation’s Psychologist. In this discussion, his motivations for the assault are made clear and firmly entrenches his conviction to change the world order. However, Dysart hammers home Harada’s conviction in an emotional sequence involving Angela Peace Baingana and one of the Foundation Zone’s citizens. It is utterly disturbing as it exposes Harada’s own realization of the wrongness he is committing in order to achieve his vision.

While the majority of the issue focuses on Harada, Dysart also expertly weaves a number of other story line threads into it. There is the aforementioned sequence with Angela Peace Baingana and the mystery of a deal that Harada has made with her. There is also the beginning of the Vine Imperative involving Sasha Solomon and her mother, Tess Solomon.

Cafu’s artwork is very strong and compliments Dysart’s writing well. The action sequences in the beginning of the issue are dramatic and powerful. It depicts Harada’s strength and confidence. This strength and confidence also comes off as horrifying when Orchid and Darpan assault a Hutu F.D.L.R. Camp in the Democratic Republic of the Congo. 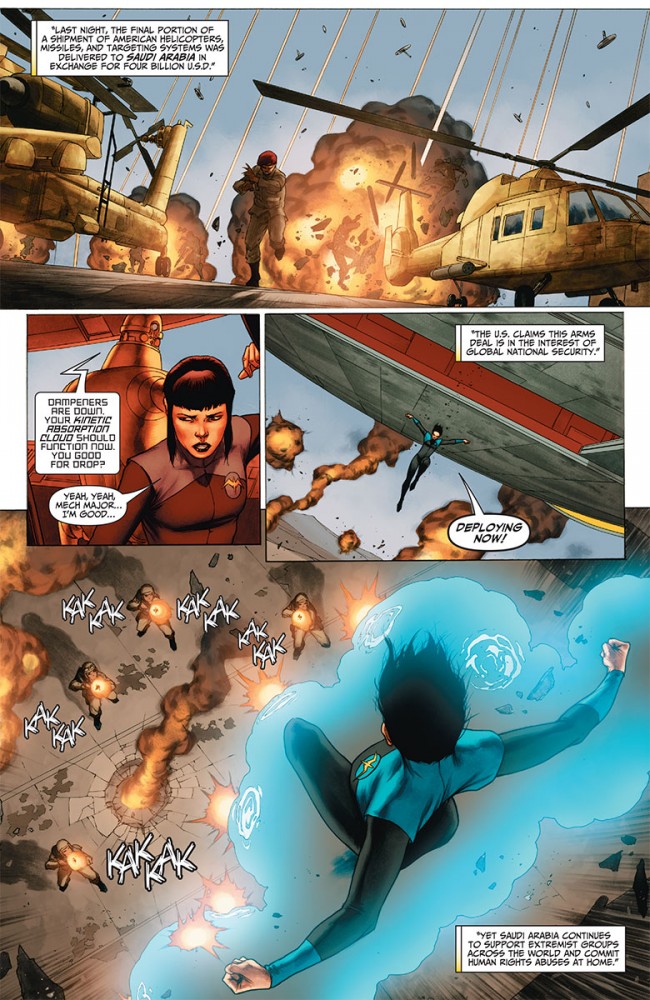 Of note, Cafu gives us a glimpse of what a home looks like in Harada’s Foundation Zone, supposedly the only post-scarcity city. The building is dilapidated with stains along the wall and the appliances are non-existent as a woman cooks her food on a stone oven. The room is only lit by a solitary, exposed light bulb.

Cafu also uses some unique panel layouts, especially towards the end of the issue. He effectively uses ten panels on one page to show the response to Harada’s message. It captures protestors in the street, the response from politicians as well as the intelligentsia, in addition to introducing Tess Solomon. It might sound like a busy page, but Cafu is able to effectively convey it all in an easily readable fashion.

Finally Brian Reber’s colors do an excellent job of letting the reader know when the Vine are communicating telepathically with each other. He uses multiple shades of blue transitioning from dark to light as you get closer to the middle of the panels.

He also creates a clear contrast between the first two pages. The lighting in the first is bright with lots of light reflecting the happiness of Cafu’s commercial-like panels, while the second page is much darker and grimmer as Harada begins issuing his speech to the world. 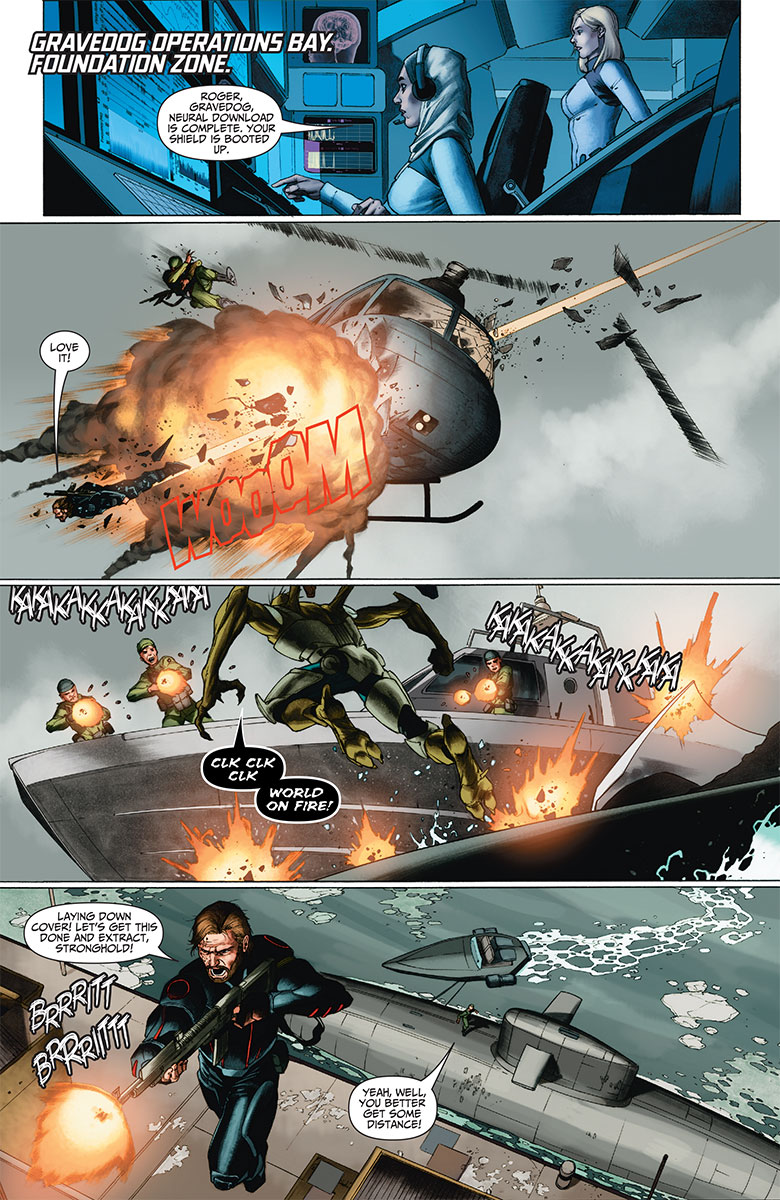 [easyazon_link identifier=”B01577IO12″ locale=”US” tag=”bounintocomi-20″]Imperium #9[/easyazon_link] is another wonderful display of writing by Joshua Dysart. He is able to touch on the ideology and motivations of Harada, make a solid critique of current politics, and open up multiple story lines that are begging to be explored.

Cafu’s artwork compliments Dysart’s writing very well, although I’m still not sold on his interpretation of Sunlight on Snow. However, he does do a great job of showing Harada and the Foundation’s strength in their body language and actions as they decimate three strong military targets.

If you aren’t reading Imperium yet, you should be. This is the perfect issue to jump on board.